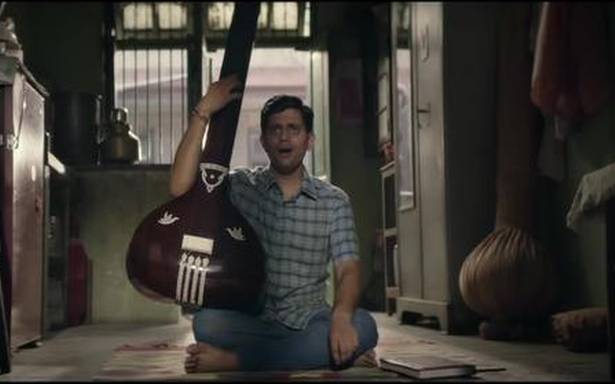 Chaitanya Tamhane’s Marathi drama, now showing on Netflix, engulfs you in its web of paradox and irony

Chaitanya Tamhane makes me jealous. Like the protagonist Sharad in The Disciple, my induction into the universe of Hindustani music was one of rapture and awe at the depth of the tradition. Many years passed before I identified the surprisingly homogenous — and disillusioningly pedestrian — subcultures it consisted of. Tamhane latches on to one of these — the Marathi Brahmin subculture of Khayal music in Mumbai — and presents an astoundingly faithful representation of its textures, timbres and contradictions.

After the debacle that was Bandish Bandits, much was expected from the director of the incredible Court and Tamhane does not disappoint. From its unostentatious settings to its often stiflingly closeted worldviews, from its endearing music schools to the lovely music itself, Tamhane conjures up a world that is almost too familiar. In this sense, Tamhane is practically an ethnographer. Like the many ethnomusicologists who have studied this music, Tamhane is less interested in stardom and glory and more in the peculiar shapes the music’s human ecology takes. The Disciple plays out like a mehfil, a languorous soiree that takes its time to engulf you in its web of paradox and irony.

The contradictions the film grapples with are at the heart of the music’s recent history. Hindustani Khayal was historically practised in royal courts across north India by various musician castes, often of ambiguous religious affiliation. But the British divided the populace into simplistic categories for administrative efficiency, effectively obliterating the religious diversity and syncretism of South Asian culture. In the universe of Hindustani music, this pitted a ‘disruptive’ Muslim present against a romanticised Hindu past. Colonial scholars proclaimed that the music they heard around them wasn’t India’s ‘real’ music. That, they contended, was lost and could only be found fossilised in ancient Sanskrit texts. They deemed the living music around them vulgar, corrupted by falling into the hands of ‘illiterates’ and ‘prostitutes’, a claim even musicians of the time often bought into.

This blow to its reputation prompted 20th century reformers to take up its cause. They set about systematising the music and winning back social respectability. They famously succeeded: the prestige it enjoys today, and Tamhane’s film itself, are indebted in no small measure to them. But one of the means the reformists used was to infuse its culture with an identifiably Hindu religiosity. It is from this history that the contradictions Tamhane so consummately captures emerge.

They are brought into Sharad’s life by his guru, a venerable gharana master played commendably by veteran musician Arun Dravid. Sharad listens obsessively to tapes of his guru’s guru: the unseen but always present Maai. The saintly matriarch of Sharad’s Alwar gharana, Maai remains an oppressive presence, whose pithy aphorisms Sharad faithfully performs to, much like the tanpura to which he sings khayal. “This is music that saints and ascetics have attained after thousands of years of rigorous spiritual pursuit,” Maai says, and Sharad dutifully proceeds to take on the Herculean task of bearing the entire weight of this tradition on his very mortal shoulders.

There is certainly a romance to Sharad’s quest. In scenes eerily reminiscent of our present state of lockdown, Sharad drives around the deserted streets of night-time Mumbai with Maai’s words ringing in his ears. His unquestioning belief in the mythology of the tradition infuses his music, like that of his guru, with pathos and grandeur. And certainly, beautiful music emerges from this crucible in which myth, reality and genuine strife come together.

Aditya Modak deserves credit not only for his newfound acting skills, but also for reining in the virtuosity he is capable of and presenting renditions of Sharad’s singing that remain authentic to the character’s musical evolution. A lot of the credit for making this possible goes to Aneesh Pradhan’s music direction. Modak, Dr. Arun Dravid, Deepika Bhide-Bhagwat, Pt. Omkar Gulvady, and the many other real-life musicians in the film have all been impeccably cast.

The music you hear is precisely what a talented, struggling young singer of Sharad’s temperament would sound like. Tamhane depicts the courage it can take to sing even a single note, even when practising in solitude, for fear of disrupting the rich tapestry of tunefulness and memory a tanpura can create.

For me, the film’s most moving moments are the ones where there is the tantalising possibility of Sharad finding an escape hatch and discovering his own music. There are the riyaz sessions, imbued with tension, where the raag eludes Sharad. But does it elude him because he is incompetent or because his tradition tells him that any twist he gives it might be ‘incorrect’? The film leaves this provocative question unanswered.

There is the music collector (played excellently by Prasad Vanarase) the young Sharad meets, who punctures his bubble; and the reality show contestant who provides the foil to Sharad’s quest and achieves fame and glamour and is certainly not musically incompetent. But Sharad is incredulous at their transgressions and continues to seek validation only from his guru and the mythology he and Maai represent. He wants to live up to Maai’s exalted rhetoric — but that rhetoric deems the simple goal of creating and sharing beauty almost unworthy.

Where Tamhane really stages a coup though is the sequence towards the end of the film where a distracted Sharad begins raag Miya Malhar but finds it impossible to weave it into a cohesive whole. He has got rid of his Maai tapes and his guru is dead. His tethers to his tradition have been broken and he wanders aimlessly through the by-lanes of the raag. For me, it is in these disconnected, disorderly strands of Malhar that Sharad toys with that one gets, for the first and only time in the film, a glimpse of Sharad’s own voice, the possibility of him finding his own aesthetic and making the tradition his own. But Sharad is overwhelmed, perhaps by this very seemingly sacrilegious possibility, and walks off stage. This music belongs to venerable sages! How could it possibly be his own? This is probably the most dramatic scene in the film, otherwise spectacular for its lack of drama. The dissonance of the tanpura, the choice of raag, the magnificent pauses that punctuate Sharad’s struggle with it — Tamhane, Pradhan and Modak have created something special here.

Sharad survives. He discovers the permanent anxiety of the impending loss of heritage that is always available to practitioners of the ‘traditional’ arts and, on that pretext, sets about making a living by teaching and disseminating archival material. He starts a family — and discovers there some of the simple joy his music failed to give him. Was Sharad incompetent? Who is to judge and how?

The Disciple ends with a folk singer on a train, who movingly sings a Gorakhnath bhajan. His voice is magnetic and grabs Sharad’s attention for a minute, before he realises that, like most other things, he cannot accommodate this melody in his musical world. He doesn’t know what to do with it and looks away. The bhajan’s line is poignant: ‘On the edge of the well was planted the seed of a tamarind tree’. Sharad remains on the edges of the well of musicianship. The freedom of the plunge is not for him.

The writer is a scholar and Hindustani musician.