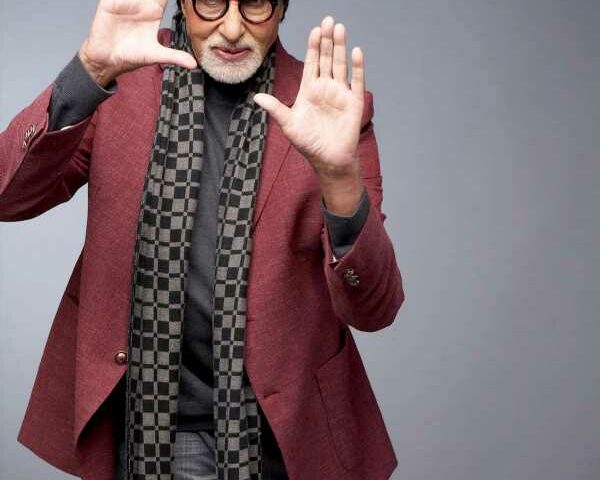 ‘He is a courteous gentleman too, who will walk you all the way to the gate after an interview and wait till you drive off.’
‘And if he’s late by even five minutes, he is profusely apologetic.’

Rediff.com Senior Contributor Roshmila Bhattacharya reels back to her interactions with Amitabh Bachan over the years, sharing how she landed her first photograph with a star, talks about questionnaires that were answered late into the night and reveals how she landed on KBC.

“Amitabh Bachchan was impressed that Shashi Kapoor began every conversation with, ‘Hi, I’m Shashi Kapoor.’ Mr Bachchan also introduces himself, even though today there’s hardly anyone who isn’t familiar with him or his famous baritone,” Roshmila tells us. 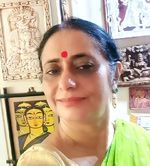 It was just another day at the office.

I was with Hindustan Times’s HT Cafe then, and in between writing and editing copies, had stopped at the desk of a senior colleague, Shashi Baliga, who passed away too soon, for a quick chat.

We were happily discussing the climate changes in Bollywood when someone announced, flashing me a bemused glance, ‘Hey, you are there in Bachchan’s blog today. Photo bhi hai.’

I stopped in mid-sentence.

My mind had gone blank.

I was incapable of speech.

I was sure my heart had stopped beating.

Back in 2009, being featured in Amitabh Bachchan’s daily journal was a matter of concern for any journalist.

If he thought he had been misquoted, misinterpreted or misrepresented, he would set the record straight on his microblogging site by publicly pulling up the offender.

I rebooted the brain trying to recall the pieces I had written on him, wondering which of them could have brought on a reprimand.

There were no warning chimes, in fact, my most recent interview with him had yet to be published.

Meanwhile, Shashi was voicing another query, ‘Where did he get your picture?’

Point. I rarely get photographed, and when I do, I am stiff and self-conscious or the images are blurry and ghostly.

Oh God! My feet thudded across the newsroom as I raced back to my desk.

I waited for the sting even as my fingers busily Googled ‘Bachchan Bol’.

I started reading, my heart thudding.

He was emotional because the journalists who had come to interview him had reacted positively to the trailer of his upcoming film.

Paa was a daring departure from the run-of-the-mill, with Mr Bachchan playing Auro, a 12-year-old schoolboy with a rare genetic disorder, progeria, which made him look older than his years.

I scrolled down to a veritable picture gallery.

There were photographs of Mr Bachchan with several journalists, including one of me sitting opposite him, listening intently.

I had a notebook on my lap and a pen in my hand.

I don’t trust machines (read dictaphone or mobile phone) to record quotes for posterity so while speaking I am simultaneously scribbling.

He does not trust journalists, so his videographer records all his interviews.

The picture was taken from our last interview.

It made me a ‘star’ in our newsroom even though he is the one who shone bright.

Since it’s my only photograph to date with a star, I sent the link to my husband.

Pallab had it scanned, developed and framed.

‘For posterity,’ he smiled, as he presented it to me.

The picture found a place high on our bedroom wall, brushing shoulders with several family clicks.

Years later, the electrician who had been called to fix a fused lamp, spotted it as he perched on the ladder.

With rounded eyes, he looked down at my husband rapping out instructions, ‘Yeh Bachchan saab hain ka?’

I nodded, amused by the dawning respect in his eyes for madam.

That day, for the first time, we got a discount, without even asking for it.

Singin’ in the rain During the course of an interview, the film’s writer-director, R Balki, shared that he got the good news when he was buying shoes at a quaint village shop on the outskirts of London.

He still had the pair, he laughed.

I also learnt that the rain dance in Paa happened spontaneously, when it suddenly started raining while they were shooting in Malaysia.

Like excited school kids who suddenly get a half day, Auro and his reel-life mother, Vidya Balan, turned into Gene Kelly and started singin’ in the rain.

Fortunately, the camera was still whirring and their child-like glee was captured on film.

That’s one of my favourite scenes from Paa because growing up, actually even now, as the first monsoon showers rejuvenate a parched city, I invariably get off my ride and splashing through the puddles, singing, Rim Jhim Gire Saawan, return home soaked to the skin.

The song incidentally is from a Bachchan film, Manzil. 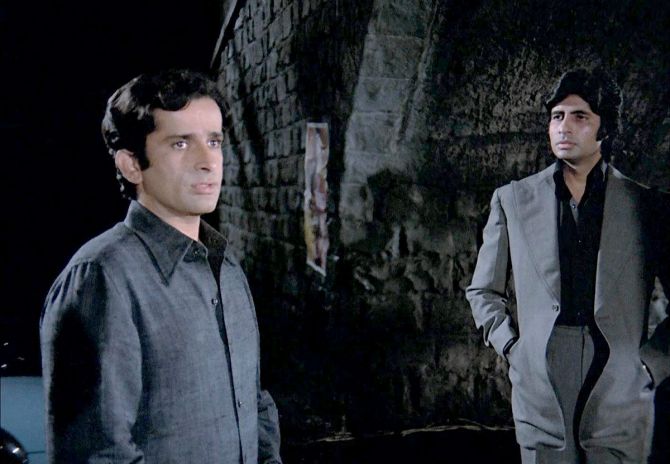 He may have banned the press for 15 years, but by the time I entered the field, Amitabh Bachchan was one of the most accessible actors in the film industry.

I often got a chance to meet him at his office, for one-on-one interviews.

When that was not possible, you could mail him a questionnaire and know it would be answered.

In 2015, Shashi Kapoor, at the age of 77, became the 46th recipient of the prestigious Dadasaheb Phalke Award for outstanding contribution to the growth and development of Indian cinema.

I reached out to Mr Bachchan to speak about the actor with whom he has co-starred in a number of films, including Deewar, Kabhi Kabhie, Trishul, Shaan, Namak Halal.

I was told by his publicist that it was a really busy day, packed with shoots and meetings.

It was unlikely that he would find the time, but I could send a few questions.

I did, they remained unanswered.

Disappointed, I put the edition to bed and went to bed myself, well past midnight, after one last longing look at the computer.

The next morning, I woke up to find his replies in the mailbox.

He had answered my questions while the world and I slept.

I learnt that of the films Shashi Kapoor produced, including Ajooba, which he had also directed and which had featured his frequent collaborator. Mr Bachchan had been most impressed with Junoon.

On a more personal note, he was impressed that the gentleman-actor began every conversation with, ‘Hi, I’m Shashi Kapoor.’

Mr Bachchan also introduces himself, even though today there’s hardly anyone who isn’t familiar with him or his famous baritone.

He is a courteous gentleman too, who will walk you all the way to the gate after an interview and wait till you drive off.

And if he’s late by even five minutes, he is profusely apologetic. 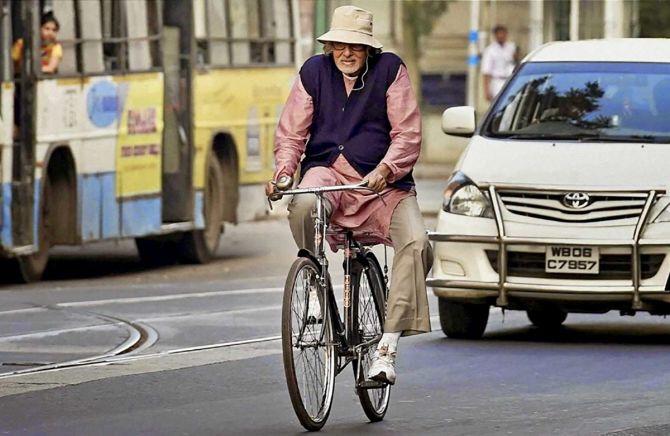 Once, when Sujoy Ghosh landed up unannounced at his residence and whisked him off midway through our interview, Mr Bachchan was distinctly uncomfortable.

He returned, reproaching the director for having kept me waiting.

He confided later that he had managed to convince his ‘genie’ (that’s what Mr Bachchan played in his film Aladin) to record a song for his upcoming film, Kahaani.

It was Mr Bachchan’s first Bengali song, and a Rabindra sangeet which he described as an ‘outstanding composition’.

He was understandably reluctant to take on the challenge but Sujoy can be charmingly persuasive and he was coaxed into recording the five-minute plus song.

Sujoy was delighted with the result, but his perfectionist singer was far from satisfied.

He vowed to re-record the Rabindra sangeet as many times as required, so Bengalis would not be disappointed with their jamai babu (son-in-law).

Amitabh Bachchan may have been born in Uttar Pradesh, but his heart beats for Bengal.

In 2015, when I caught up with him soon after the release of Piku, which incidentally fetched him his fourth National Award for Best Actor, we spent a happy half hour wading through nostalgia.

Recalling his early days in Kolkata, when every morning he would set out in a jacket and tie to look for a job, he laughingly confided that during the monsoons, he would roll up his trousers and wade through knee-deep water in Esplanade (a locality in Kolkata).

It brought back memories of my own monsoon excursions in the city of my childhood.

The conversation veered to Manikda, one of the most famous Bengalis, whom the world knows as Satyajit Ray.

He proudly informed me that his study was as messy as Ray’s.

There’s a lot of Kolkata in Piku, the first film he shot in the City of Joy, I pointed out.

But not enough, he grumbled, complaining that Shoojit Sircar had edited out some of the typical Bangla phrases like ‘ghorar dim‘.

The director believed people would translate it literally as ‘horse’s egg’.

‘Nonsense!’ he exclaimed, aptly scrambling the phrase I had grown up hearing.

Today, as I write this, I understand that there can be sense even in nonsense!

In the hot seat Seven years have passed since that interaction though thanks to COVID lockdowns, it seems only yesterday.

For several months, time came to a standstill.

And a lot changed.

But Mr Bachchan remains the one constant who still enters our living rooms every evening with KBC.

When his game show was flagged off, on July 3, 2000, my daughter Ranjika was just over a year old.

At 9 pm, as the signature music started playing and the lights flashed on screen, my moppet would drop whatever she was doing and crawl into the rocking chair that was older than her.

Then, as Amitabh Bachchan appeared on screen, with yet another episode of Kaun Banega Crorepati, she would clap her little hands over her eyes and shyly peek at him from between her splayed fingers.

For the next one hour, till the bhompu (beeper) sounded, she would sit in her hot seat, listening to him intently, occasionally responding with gibberish of her own.

I would have liked to believe that my lil’ genius was imbibing the wealth of knowledge.

But I knew better.

It was Mr Bachchan’s larger-than-life persona that had her transfixed.

And KBC is still playing in our living room.

Last October, my first book Bad Man, made it to the show as a question.

The answer came in a flash, ‘Option B, Gulshan Grover.’

Locking it in, he mentioned my name as the co-writer and informed that the title of the aatma katha came from Subhash Ghai’s 1989 film, Ram Lakhan, which had made Gulshan’s Bad Man a household name.

The flood of responses from friends, neighbours and countrymen within minutes of the segment airing was overwhelming!

He made me feel like a crorepati even without sitting in the hot seat. 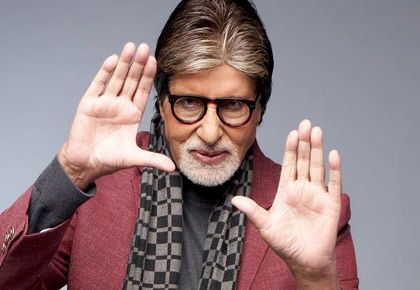