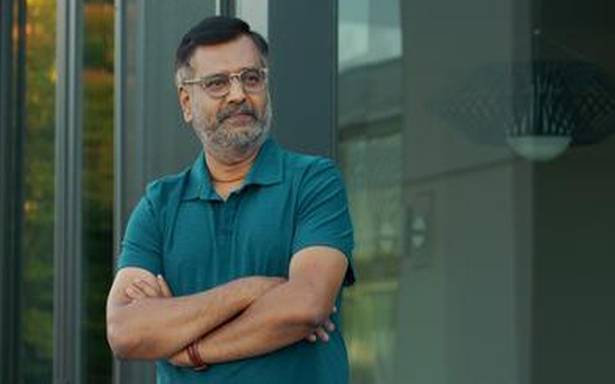 In his decorated career, Vivekh was a rare actor who practised what he preached through comedy, and lived his life based on those beliefs

Actor Vivekh died early Saturday morning (4.35a.m.) after suffering a massive cardiac arrest on Friday. He was 59. The comedian’s untimely demise has shaken up the Tamil film fraternity, and legions of fans.

Vivekh was one of the aspirants shepherded by legendary filmmaker K Balachander, who introduced the actor as ‘Vivek’ in Manathil Uruthi Vendum, in which he played a small role. But what was truly a breakthrough for Vivekh was his character in Balachander’s Pudhu Pudhu Arthangal (1989), wherein he played the hero’s manager. The film saw Vivekh doing a near-perfect impression of Tamil cinema actors, particularly of Rajinikanth, and effortlessly delivering punchlines that were so unique of its time — like, “Inniki setha nalaiki paal (today’s death is tomorrow’s milk),” which most people have pointed out on social media, drawing a parallel with the actor’s death. This rather effortless idea of comedy spoke to the audience and Pudhu Pudhu Arthangal was the launchpad for a career of more than three decades, in making the audience laugh and introspect as well.

Though Vivekh was testing waters initially by playing supporting characters, it is believed that Kadhal Mannan (1998) was the first film that established him as a comedian, almost a decade after making his debut. Since then, there was no turning back. From 1998 to till about, say, Anniyan (2005), the period can be argued as the one that brought out the best of Vivekh. He was beginning to get noticed and began churning out blockbuster comedies in films such as Eazhayin Sirippil, Mugavaree, Kushi, Pennin Manathai Thottu, Priyamanavalee, Dhill, Dhool, Minnale, Saamy and Poovellam Un Vaasam to pick a few. The 2000s saw Vivekh at his peak where he was literally the second-fiddle in every other film.

The two-star culture of Tamil cinema somehow crept into the comedy space too, for, Vivekh was always seen and pitted against his rival-friend, Vadivelu. They produced the best of comedies when they collaborated in films, like Manathai Thirudi Vittai and Middle Class Madhavan. Despite facing a tug-of-war like situation with Vadivelu, Vivekh invented his own brand of dialogue-comedy, with a tinge of social responsibility, that was born out of instinct.

There is always a Vivekh comedy for everything that is wrong in society. He questioned superstitious beliefs in movies like Minnale, Youth and Run to name a few, and took on the subject of caste in Saamy. The train journeys, for most of us, were never the same after his hysterical portions in Anniyan, one of his all-time best performances. Every outsider sympathised with his character in Run, in which he made even ₹5 biriyani look cool. The larger point is: he had always put social values above everything — to the point where actor Santhanam once famously said, “Ungalaiyellam aayiram Vivekh vandhalhum thirutha mudiyathu (Even 1000 Vivekhs cannot change you).”

Perhaps after Chinni Jayanth, one can argue that Vivekh was one comedian who defied age; he played a college mate and a sidekick to top stars including Rajinikanth, Vijay, Ajith Kumar, Vikram, Suriya, Prashanth, Prabhudeva and so on. He was among the earliest of comedians who successfully made the transition to taking up character roles during the height of his career, which is usually considered a step back. While these films may not have had a separate “comedy” track, the humour was inducted into the film and Vivekh held his own ground — whether it was the now-popular Mangalam Sir in Boys, Alaipayuthey, Kana Kanden, Perazhagan, Ennaku 20 Unnaku 18 or Chari in Anniyan. He never missed an opportunity to take a dig at actors and invariably made jokes on Kamal Haasan, and poked fun at Tamil cinema in films like Viswanathan Ramamoorthy (in which he played a struggling director), Parthiban Kanavu (known for making its parody on Mudhal Mariyathai), Guru En Aalu (in which he spoofed Thalapathi) and Bommalattam.

Vivekh was also a rare actor who practised what he preached through comedy and lived his life based on that belief. An admirer of former President of India Dr APJ Abdul Kalam, Vivekh launched Green Kalam in 2012, his eternal fight to global warming and planted over a billion tree saplings across the state. He had since then launched and been part of several initiatives for social causes — even as recently as when he took the COVID-19 vaccine, in a bid to encourage people from getting vaccinated. He was the recipient of Padma Shri, India’s fourth-highest civilian honour, for his contribution to Tamil cinema.

Vivekh redefined his own formula in the last decade; he appeared less in films and became mindful of the projects he chose to associate. Among the younger crop of actors, it should not be an exaggeration to say that Vivekh’s best collaboration came from Dhanush — something even the former himself acknowledged once. The duo complemented each other so well that their comedy seemed natural — whether it is Vivekh’s Azhagusundaram from Velai Illa Pattathari or Emotional Ekambaram from Uthamaputhiran. In the latter part of his career, Vivekh switched to playing serious, character roles that worked to the film’s advantage. These include films like Manithan, Kaashmora, Brindavanam (in which he played himself) and Viswasam to name a few. He received critical acclaim for his performance as the lead in Vellai Pookal, a crime-thriller. Last year, Vivekh delivered a heartwarming performance as Dr Kannadasan, a fertility expert in the Tamil remake of Vicky Donor (titled Dharala Prabhu). While the film received a positive response, most critics seemed to have agreed that Vivekh was the best thing that happened to the remake.

Always with a disarming smile whether on or off screen, Vivekh’s death has left the fans devastated. For, the actor has become a part of our vocabulary; of the way we think and respond to situations. As we mourn in silence, one suspects that Vivekh would have said: “Elley don’t worryyyy, be happyyyy.”