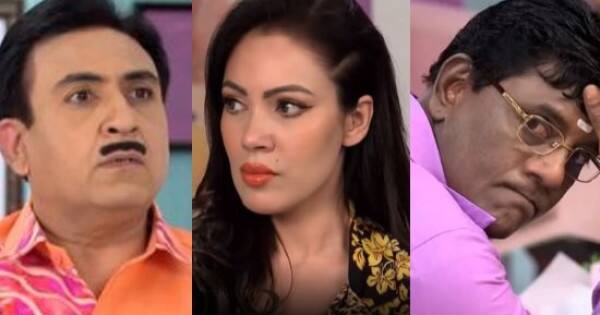 There would be a high-voltage melodrama in Jethalal Champaklal Gada aka Dilip Joshi’s life in the latest episode of Taarak Mehta Ka Ooltah Chashmah. It seems he has let down his crush Babita Iyer aka Munmun Dutta due to which she is mighty upset with him. Yes, as per the latest promo, Babita would lash out at Jethalal for not being able to comply with their request of 100 tabs for Iyer’s boss. Babita tells him, “Jetha ji, aapne humare saath bohot galat kiya hai. Aapne mera bharosa hi nahi, mera dil bhi toda hai. (Jetha ji, you have fooled us. You not only broke my trust but also my heart).” Hearing that he broke Babita’s heart, Jethalal feels very sad and tries to pacify her and asks for forgiveness. But Babita is in no mood to listen. She’ll show him the door leaving Jethalal disheartened. Jethalal will walk off, only to turn back at the door. Iyer seeing him at his door, would throw him out and slam the door on his face. Later, we will see, the bouquet that Jethalal got for Babita and Iyer as a sorry would be thrown out. That would dishearten him more. It’s very dramatic and also hilarious at the same time. Have a dekko at Jethalal’s plight here:

For those not in the know, Iyer’s boss had asked for 100 tabs. When learning that he couldn’t get those in time, he suspends Iyer from the job leading to a massive showdown between Iyer-Babita and Jethalal. How would now Jethalal make peace with Babita and Iyer? Well, it remains to be seen.

Actor Dilip Joshi aka Jethalal had done a YouTube podcast with Sorabh Pant in which the star gave his opinion on people demanding ban or end to the show. He said, “Many times on social media people say that they will ban Taarak Mehta… and say that they will end the show. I’m like if you don’t like the show, don’t watch it. Why are you telling us to end it? So many people say a lot of things and if you listen to all of them, you won’t be able to work.”