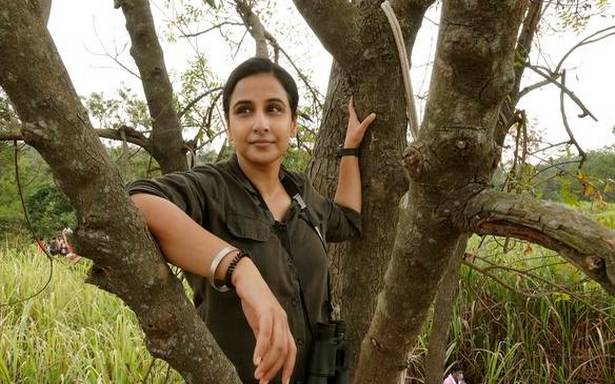 The tiger never roars in Sherni. It doesn’t need to, and neither does the protagonist, forest officer Vidya Vincent, played by Vidya Balan.

In the world visualised by director Amit Masurkar, built upon Aastha Tiku’s writing and research, the quality of quiet fortitude is to be respected, in animal and (wo)man.

This isn’t because of the director’s dislike towards histrionics, but merely a result of observation of real life people on whom he based his characters, explains Amit, over a call from Mumbai.

“For Sherni, we wanted an authentic jungle story. Aastha did a lot of ethnographic research; we met locals in Madhya Pradesh who depended on the forest, and people who worked in the field of conservation. We talked to them about their lives, trying to understand the various situations they have been in. In the process, you start drawing a mental picture of the characters you want to feature; there are little traits you pick up from them,” says Amit.

The movie, which released on Amazon Prime recently, has been praised by environmentalists for its sensibilities. “We had a consultant on board to make sure that every jungle call, every bird and insect sound that you heard was at the right location and at the right time of the day,” he says.

Sherni is also populated by actors cast from the villages where they shot, near Gondia forest in Maharashtra and Madhya Pradesh, and volunteering forest guards, who were all given acting workshops before being selected.

When the world is realistically set thus, it organically makes space for humour. This has been consistent in Amit’s limited but standout oeuvre: from Suleimani Keeda (2013) that poked fun at fledgling screenwriters, to more serious dramas like Newton (2017) and Sherni.

Introducing humour effectively into taut suspenseful storylines is not something that can be forced — “whatever humour comes in, is a result of the characters being in the situations they are in,” says Amit, who in the start of his career wrote sketches for The Great Indian Comedy Show.

He points to Brijendra Kala’s chase sequence (a hunt in the bureaucratic jungle): “He’s running around, gasping for breath while there are men assaulting him. It wouldn’t normally have been funny, but the way he played it is what made it so.”

Brijendra Kala as Bansal in Sherni

So, is it a conscious choice to cast actors who have a knack for comedy? We see this in Newton too, whether it’s Pankaj Tripathi and his straight faced snark, or Rajkummar Rao, who gave his character a distractingly insistent way of blinking and shoulder scratching. “I firmly believe that actors who can do good comedy, can do anything. An actor who has a natural sense of humour and comic timing can play any part. Vijay Raaz (known for his comedic talent) is not doing anything funny; it’s a serious character, but you can feel for the character of Noorani,” says Amit.

He was determined, in particular, to cast Sharat Saxena for the role of Pintu bhaiyya. “He is actually from Madhya Pradesh and has lived in areas near the jungle. He is fascinated by tiger behaviour; he even has a tattoo of one on his hand. We met him and thought he would be perfect,” he says.

Pintu, the hunter, is the only main character in Sherni whom Amit refuses to view with empathy, or flesh out what makes him the kind of person he is. In a movie with conflicting ideals, it perhaps helps to give audiences one person to root against.

Basking in the reviews, Amit has been sharing behind-the-scenes pictures of the shoot. “We were in a bio bubble then,” he recalls. “Everyone was working after eight months of being stuck in lockdown, so we were happy to interact with other people. We were happy to be finally doing what we love.”

His next, an OTT series, is once again with Aastha. “It’s going to be set in the city of Mumbai,” is all he is willing to reveal.