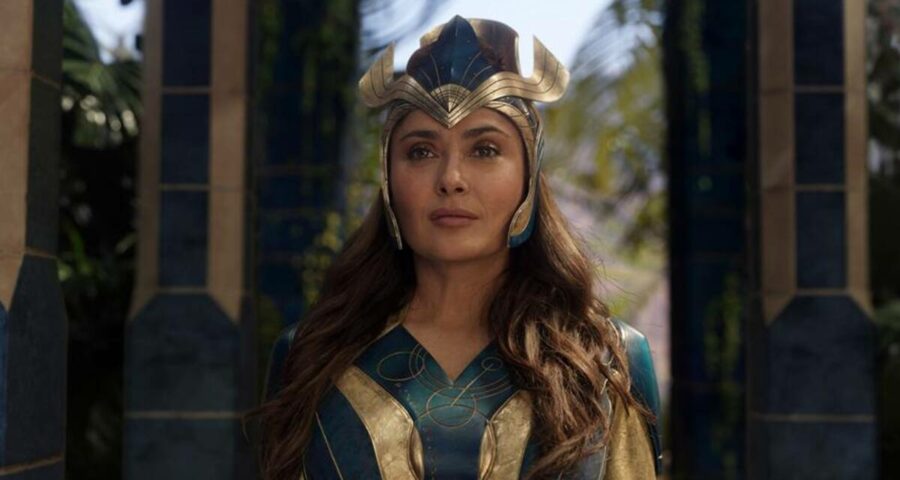 As Ajak, whose superpower is healing, Salma Hayek’s is the only character who has a direct connection to the Celestials, an ancient race of beings that possess vast abilities to manipulate matter and energy, and who sent the Eternals on a mission to Earth. Salma Hayek laughs when asked if she ever felt like the mom of the group on the set of Eternals.

“Yes, because everyone also came to tell me about their problems … and I liked it a lot,” says the Mexican actor, who at 55 plays the matriarch of the superheroes in the new Marvel movie.

And as a sample, she said she had “thousands” of anecdotes.

“For example, Barry (Keoghan), who plays the role of Druig, has dyslexia like me and came to my trailer every day: ‘Help me, help me with the lines, I’m ashamed that others hear how I read.’ And there I would sit with him and we would laugh a lot. It was like doing homework with my kid,” Hayek said in Spanish during a recent video interview from London. “He is much younger than me, and he is another actor with dyslexia.”

The film follows a group of immortal beings with superhuman powers who have secretly lived on Earth for thousands of years, and who now gather to fight the evil Deviants, a fictional race of humanoids. The cast includes Angelina Jolie, Kumail Nanjiani, Richard Madden, Gemma Chan and Lauren Ridloff, the first deaf actor to play a superhero in the Marvel Cinematic Universe.

As Ajak, whose superpower is healing, Hayek’s is the only character who has a direct connection to the Celestials, an ancient race of beings that possess vast abilities to manipulate matter and energy, and who sent the Eternals on a mission to Earth.

The actor, who had experience with CGI from Robert Rodriguez’s “Spy Kids” movies, said she was surprised by how little the technology was used in Zhao’s film. The “Nomadland” director is known for her rather naturalistic style.

“Normally they don’t use locations (for superhero movies), all the scenery is done later with computers. We filmed in the Canary Islands and here in the UK and I loved it, it all felt very organic,” she said, noting that her only CGI scenes are those in which she speaks to a Celestial.

“You are seeing a cross on a green wall while you have thousands of extensions that weigh a lot and this thing that I have on my head that also weighs, so I ended with some neck pain … but I just did that a couple of times.”

One of her biggest challenges, in fact, was related to the costumes. In addition to the headdress and extensions, some of the suits were so tight that gaining just a few pounds could be a problem.

“I was terrified because the filming took like five months. I didn’t go every day, but it was a period of five months where, if you gain weight — and I tend to be like this,” she says, making waves with her hand. “I said, ’Oh, I am not going to be able to gain or lose any weight because of those suits.” 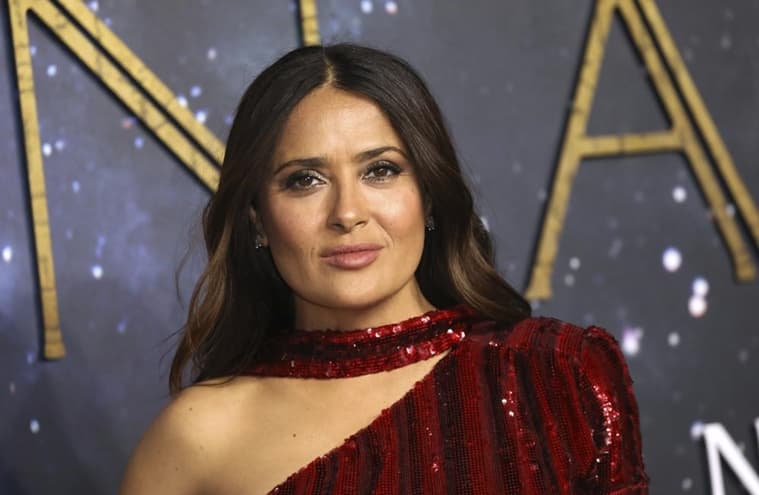 “I was absolutely right!” she added with a laugh. “After the pandemic, I had to do a couple more shots and the suit didn’t fit anymore! Good thing that it was something very small, because it was really traumatizing. But hey, it happened to many of us.”

Eternals is one of four Hayek films releasing in 2021. The Oscar-nominated actress (for 2002′s Frida) starred this year in Bliss and Hitman’s Wife’s Bodyguard, and will next appear in House of Gucci with Lady Gaga, Adam Driver, Jared Leto, Jeremy Irons and Al Pacino.

Of the four, Eternals is the only one directed by a woman.

“I have such an admiration for her,” she said excitedly about Zhao. “She is super strong, she knows very well what she wants. Some people said, ‘Oh, but she’s made very small movies, she’s not going to know how to handle such a big production.’ Uff, she is super technical, well-educated in cinema, she understands both the immense and the personal … and she handles the actors super well.”

Zhao made sure to put together a cast that couldn’t be more inclusive. In addition to Hayek as a Latina and Ridloff as the first deaf superhero, Eternals also features Black (Brian Tyree Henry as Phastos) and Asian actors (Chan, Nanjiani and Ma Dong-seok, as Makkari, Kingo and Gilgamesh, respectively) and shows the first gay kiss in a Marvel movie.

Hayek said opined that while the inclusion of a diverse cast “sometimes feels a little forced,” that was not the case for Eternals.

“Like everything Chloe does, she really does it from her gut, because she believes in it naturally,” she said.