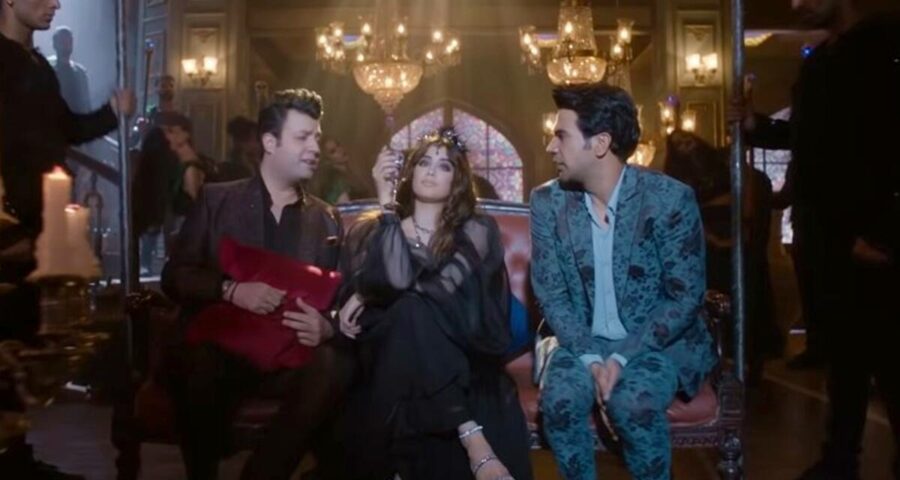 The first song "Panghat" from Hardik Mehta directorial, Roohi is out. Starring Janhvi Kapoor, Rajkummar Rao and Varun Sharma, the song has been sung by Asees Kaur, Divya Kumar and Sachin-Jigar. Actors Rajkummar Rao and Varun Sharma are clearly under Janhvi Kapoor’s spell as they dance together in Roohi’s first song titled “Panghat”. But, does that mean the men are really enjoying partying with a ghost? Likely to become the next earworm, “Panghat” is a decently created and composed track.

The makers of Roohi released “Panghat” on Monday, after giving us a teaser over the weekend. In the song video, we see Janhvi calling out Rajkummar and Varun’s characters who are dressed as grooms.

Portions of the song also show Janhvi shedding her bride look and turning into a witch-like character, reminiscent of Angelina Jolie from Maleficent: Mistress of Evil, Cate Blanchett from Thor: Ragnarok, or Sridevi from Puli. The Sachin-Jigar composition has a dark spooky setting and offers fusion of folk and techno beats.

While we’ve seen Janhvi Kapoor and Rajkummar Rao showcasing their dancing prowess earlier, it is Varun Sharma who is stealing the show this time. His character seems to be confused, yet going with the flow! Hope we get to see more of Varun on the dance floor.

Directed by Hardik Mehta, Roohi has Janhvi Kapoor playing a ghost who abducts brides during their honeymoon, until Rajkummar and Varun come to the rescue. Roohi is the the second film after Stree, in the horror-comedy universe of producer Dinesh Vijan.

Roohi, previously titled Rooh Afza and later, Roohi Afzana, was scheduled to release in June 2020. The movie got postponed after the coronavirus induced lockdown.

Roohi will finally arrive in theatres on March 11.