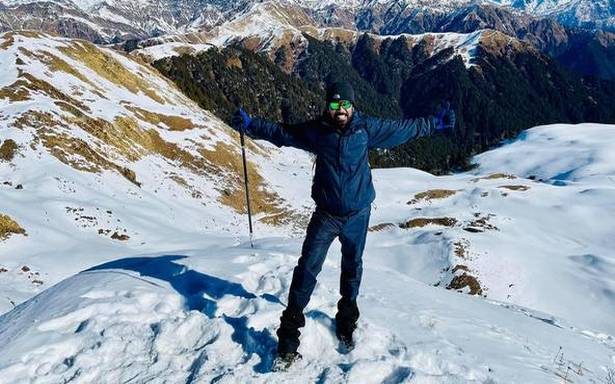 Rohit Rao is the son of the late Srinivas Rao Madasu, an Arjuna Award-winning para-athlete

Rohit Rao starts gasping for air. He is 6000 metres above sea level.

The Dzo Jongo peak (6240 metres) in July while still accessible, is not easily scalable. Rohit made it to the base camp at 5,800 metres after six days of ascent. He is tantalisingly close to the top.

As the air gets thinner, the summit seems to get farther. It is dark, too. He left base camp at around 9.30 pm; it is about 2 am now. Or maybe 3 am. After a point, he does not know what time it is, where he is or where he is going. His trek leader is concerned and advises Rohit to return.

The latter, however, is on a mission. He wants to display a photo atop the mountain. He convinces the leader and himself that he can push further.

Rohit trudges on. At 6,150 metres, he needs to climb a near-vertical slope to get to the mountain. Looking down would bring in a rush of panic. A slip could prove fatal. The following 90 meters was the biggest challenge of his life.

Rohit, however, overcomes it. At 6,240 metres above sea level, he displays a photo of his father, Srinivas Rao Madasu, an Arjuna Award-winning para-athlete who passed away in March after battling cancer.

“It is the most wonderful experience of his life,” Rohit recalls the trek he did three months ago.

Srinivas won a gold medal in the 1996 para world shooting championships in London. In 2002, he won gold in the world para-badminton championship. The following year he received the Arjuna Award.

His enthusiasm for sports, however, hardly rubbed off on his eldest son. “I was lazy. I hated getting up early. My father tried to enrol me in badminton and table tennis when I was in fourth grade. I was not interested,” says Rohit, who seemed to have a disposition for mountains even then. When his parents scolded him, he would threaten them, saying, “I will leave home and go to the Himalayas.”

Much later in life, he remembered these juvenile ultimatums when he got interested in mountaineering. Rohit started working in Accenture by now. He was the son of an accomplished athlete. And, he felt he did not have a single achievement to his name. He wanted his father to be proud of him.

In December 2018, he signed up for his first-ever trek to Kedarkantha, a 4115-metre peak in Uttarakhand. He was not sure if he could pull it off. When he scaled the mountain, however, he felt thrilled, proud, and confident. “It gives you a high. When you reach the top, everything looks small. It is as if you are on top of the world.”

Rohit was aware of taller peaks. He felt he could conquer them too. So, in 2019, he went for the Pangarchulla peak (about 4500 metres) trek and Stok Kangri (6153 metres). The COVID-19 pandemic paused his expeditions for most of 2020. In December, he scaled Dayara Bugyal (3639 metres). He started 2021 with a trek of Brahmatal (3734 metres) before his Dzo Jongo adventure in August.

That will take at least another three years, says Rohit who works in Hyderabad. “You have to increase the height gradually. I am already running and cycling in preparation for scaling greater heights. I am also looking for some financial support in my quest. I will not rest until I get to the top of Everest.”