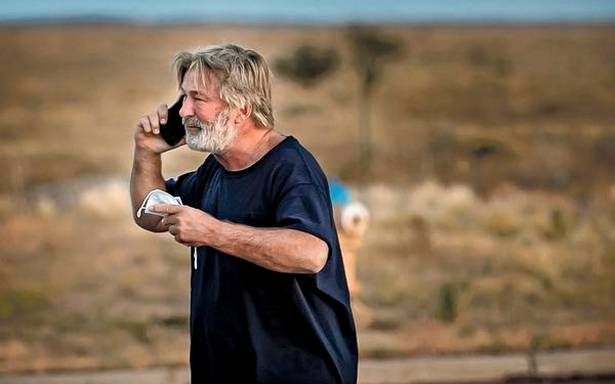 Alec Baldwin was handed what was described as a safe "cold gun" on the set of his movie "Rust", but the prop gun contained live rounds when it was fired, according to details of the police investigation into the fatal shooting released on Friday.

The shot hit cinematographer Halyna Hutchins in the chest,and director Joel Souza who was behind her, in the shoulder,according to a county sheriff’s affidavit filed in Santa Fe magistrates court.

Hutchins died of her wounds and Souza was injured but has since been released from a local hospital.

Baldwin said on Friday he was in shock over the accidental shooting as reports emerged of walk-outs on the "Rust" set earlier in the week over unsafe conditions.

The star of "30 Rock" and "The Hunt for Red October" said he was "fully cooperating" with authorities to determine how the incident occurred on Thursday.

The affidavit was filed on Friday in support of a search warrant for "old Western style clothing" worn by Baldwin that appeared to have blood stains, along with firearms,documentation, ammunition and cameras from the scene.

The search warrant was approved by a Santa Fe judge.

Mr Cano said the incident took place at the Bonanza Creek Ranch, south of Santa Fe, during a rehearsal and it was not clear whether it had been filmed.

He said the prop gun was one of three on a cart outside a building. One of them was taken by the assistant director on the movie who went inside and handed it to Baldwin.

"As the assistant director handed the gun to the actor Alec Baldwin, (he) yelled ‘cold gun’, indicating the prop gun did not have any live rounds," the affidavit said.

As the investigation proceeded, questions were raised about working conditions on the set of "Rust", a small budget Western movie of which Baldwin was both star and a co-producer.

The Los Angeles Times and Deadline Hollywood cited several members of the crew and others close to the production as saying six or seven camera operators had walked off the "Rust" set hours before the tragedy.

Both outlets also reported that there had been at least one previous misfire with the prop gun.

"We cited everything from lack of payment for three weeks,taking our hotels away despite asking for them in our deals,lack of Covid safety, and on top of that, poor gun safety! Poor on-set safety period!" one camera crew member wrote on a privateFacebook page, according to Deadline.

Reuters could not immediately confirm the accounts. Rust Movie Productions did not respond to a request for comment on Friday but said in a statement it was investigating.

"Though we were not made aware of any official complaints concerning weapon or prop safety on set, we will be conducting an internal review of our procedures while production is shutdown," the company said in its statement.

Baldwin, 63, on Friday expressed his "shock and sadness regarding the tragic accident" that killed Hutchins. In a message on his social media accounts, he said his "heart is broken for her husband, their son, and all who knew and loved Halyna."

The International Alliance of Theatrical Stage Employees (IATSE) said in a statement that it was devastated to learn of the death of Hutchins,who was a member of the union.

Hutchins’ representatives in a statement said they "hope this tragedy will reveal new lessons for how to better ensure safety for every crew member on set."

Hutchins, 42, who was originally from Ukraine, was named one of American Cinematographer’s Rising Stars of 2019. Her last social media post, two days ago, shows her grinning under awide-brimmed hat as she rides a horse. "One of the perks of shooting a western is you get to ride horses on your day off:)" she captioned the video.

Known for his impersonations of former U.S. President Donald Trump on sketch show "Saturday Night Live," Baldwin has appeared in more than 100 TV and film comedies and dramas, and won Emmy awards for his role as an egotistical TV network executive in the satire "30 Rock".

The accident renewed debate about whether certain types of prop guns should be banned on TV and movie sets.

Brandon Lee, son of martial arts legend Bruce Lee, died at age 28 after being fatally wounded in 1993 by a prop gun in a non-set accident while filming "The Crow."

"I don’t understand why we would still use blank rounds in a day when you could simulate them," indie film director and producer Ben Rock told Reuters on Friday.