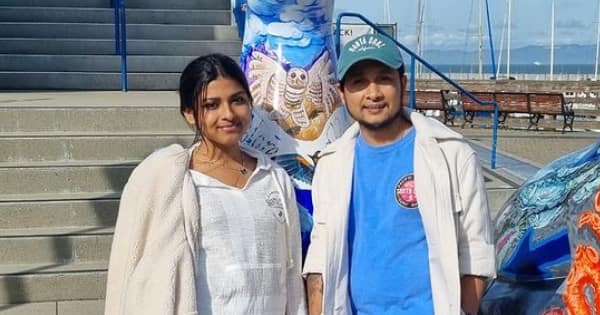 Pawandeep Rajan and Arunita Kanjilal are rumoured to be dating. And however much they deny it, their fans (AruDeep shippers) love to believe that there’s a spark between them. Arunita and Pawandeep are busy performing at various concerts and events. And the videos from these events and concerts keep going viral. And that’s what happening as you read this. A dedicated fan page has been sharing adorable videos of the Indian Idol 12 contestants Pawandeep Rajan and Arunita Kanjilal. Fans of Arunita and Pawan cannot stop gushing over how much they compliment each other.

Another video is also going viral wherein the Idols were going on stage. Arunita was about to trip when Pawandeep who was right behind her caught her. Seeing how they care for each other, AruDeep fans believe that they’ll forever be together so. Aww!! Check out the videos below:

Earlier, Arunita had stayed at Pawandeep’s hometown and attended his sister’s wedding. Pawandeep never left her alone and took care of her all the time. Fans were super happy to see them together. Pawandeep and Arunita have denied dating rumours a lot of times. They have maintained that they are best of friends and have spent a lot of time together during Indian Idol 12, their bond has just grown thus.