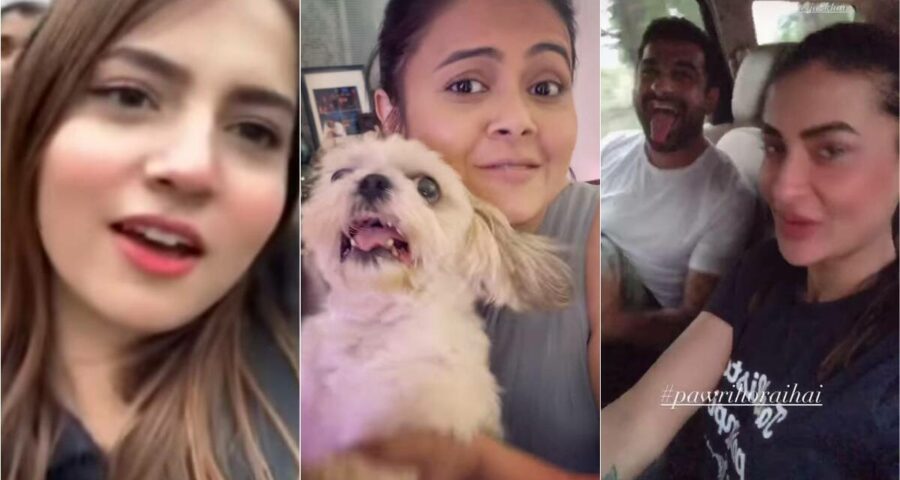 In the last few days, social media has been abuzz with the “Humari pawri ho rahi hai” trend. After fans took to creating memes, now television celebs have also shared hilarious videos on the same.

Eijaz Khan and Pavitra Punia, who found love on Bigg Boss 14, have been spending a lot of time together outside the house. Pavitra posted a cute video with Eijaz on her Instagram story, as they drive along the city having their ‘pawri moment’. Fans just do not seem to have enough of this latest video of Pavijaz, as the couple is fondly called.

Devoleena Bhattacharjee, who recently exited the Salman Khan-hosted as Eijaz’s proxy also shared a fun video with her pet dog. In the video, the Saathiya actor is seen saying that “Yeh main hu, yeh meri angel hai, and yeh humari pawri ho rahi hai (This is me, this is my Angel, and we are having a party).

On the other hand, Neil Bhatt and Aishwarya Sharma, lead cast of Ghum Hai Kisikey Pyaar Mein enjoyed a different take to their ‘pawri’. The actors, who recently got engaged recreated the video while driving to work. And as Neil laughs while speaking the lines, Aishwarya sulks and tells her fans “humari pawri nahi ho rahi hai (we are not having a party).”

Pakistani influencer and content creator Dananee is to be credited for the popular trend. Her video on how privileged people in her country pronounce ‘party’ has led to the world creating funny memes on it.

Now, a viral sensation himself, Yashraj Mukhate had recreated her video recently, adding his dash of creativity and some peppy tunes to her ‘Pawri’ comment. It soon led to everyone latching onto the trend — from Indian brands to government agencies, all seem to be hooked to this trend. Earlier, Bollywood actor Randeep Hooda had also uploaded a video on the viral meme from the shoot of his upcoming film.