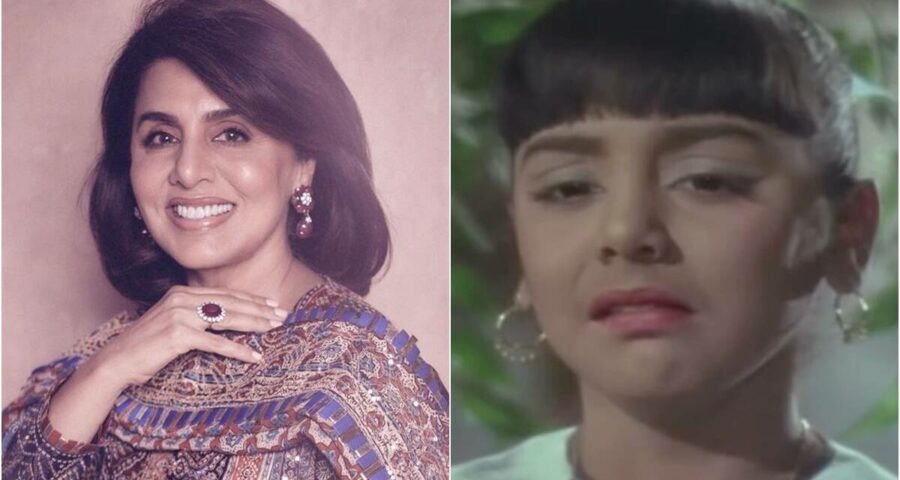 Neetu Kapoor took a jibe at her song "Murga Murgi Pyar Se Dekhe" from her film Do Kaliyaan, which she did as a child artiste in 1968. She said she used a lot of make-up back then. Veteran actor Neetu Kapoor was already a successful child artiste before she made her debut as a leading actor in Rickshawala (1973). Many might remember her younger self for her innocent roles and mischievous smile. But, Kapoor has a different way of looking back at her work as a child actor.

In an Instagram post, she shared a clip from the song “Murga Murgi Pyar Se Dekhe” from her hit film Do Kaliyaan (1968). Neetu took note of the amount of make-up she had to use back then, even at the age of 10. “#dokaliyan thopoed a lot of make up though,” wrote Neetu along with the video, sung by Lata Mangeshkar.

Do Kaliyaan is a remake of Tamil movie Kuzhandaiyum Deivamum, which was an adaptation of The Parent Trap (1961). It also starred Biswajeet and Mala Sinha, and had Neetu in a double role of daughters Ganga and Jamuna.

Soni Razdan also wrote, “Omg. You haven’t changed a bit you know ! Cute then and now.” Others who commented included Pakistani actor Mawra Hocane who believes her granddaughter Samara is a reflection of Neetu’s expressions. She wrote, “So cute Neetu aunty!! Samara gives the same expressions now! Haha.”

Neetu had last month too, taken a jibe at her song “Tere Chahne Wale Aaye Hain” from Aatish (1979). Posting a clip, she wrote, “I always wondered why I was made to look like a bird.”

Having worked in over half a dozen films during childhood, Neetu was already a popular face before she did Rickshawala. Her work as child artiste includes movies like Suraj, Dus Lakh, Waris, Ghar Ghar Ki Kahani and Pavitra Paapi.

Neetu made her Bollywood debut in the main lead at the age of 15 and went on to star with almost all the mainstream male actors of 1970s. Her onscreen pairing with Shashi Kapoor, Rajesh Khanna and late husband Rishi Kapoor were among the most successful ones.

Neetu, however, retired early at the age of 22 and tied the knot with Rishi Kapoor. She later made a comeback with Love Aaj Kal (2009). She went on to do Do Dooni Chaar, Jab Tak Hai Jaan and Besharam.