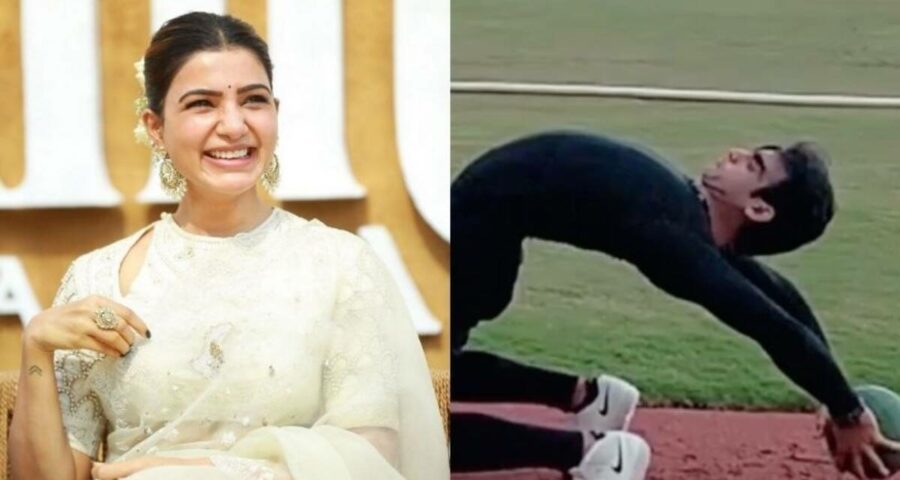 Neeraj Chopra, who made history on Saturday with his javelin at the Tokyo Olympics, can be seen bending backwards fully in the video, before throwing a heavy ball. Actor Samantha Akkineni is rather speechless after seeing gold medalist Neeraj Chopra’s flexibility in a video that’s going viral. Neeraj, who made history on Saturday by clinching gold with his javelin at the Tokyo Olympics, can be seen bending backwards fully in the video, before throwing a heavy ball.

23-year-old Neeraj from Panipat set a new record as he won the Men’s Javelin Gold Medal at the Tokyo Olympics, becoming the first Asian man to win the competition at the Olympics, as well as the first Indian track, field athlete to become an Olympic champion. He landed his spear at 86.65m, acing the qualifying round. On August 7, his final throw landed at 87.58m, scripting history for India.

After his win, Indian celebrities took to social media and celebrated his victory, including Ajay Devgn, Richa Chadha, Kapil Sharma, Taapsee Pannu, Nivin Pauly, Neha Dhupia, Sudhir Mishra, Aishwarya Rajesh and Vikram Prabhu. They hailed it as a ‘watershed moment’ and noted it as an incredible achievement.

It has been a series of euphoric moments for India at the Tokyo Olympics, as PV Sindhu won bronze. Samantha Akkineni said she respects PV Sindhu’s “hardwork” and called her “special.” On Instagram stories, she mentioned, “And she does it again. I can’t imagine what this takes. We absolutely love you and respect your hardwork and dedication. You are so special.”

Samantha has been following the Olympics closely, and after Mirabai Chanu won a silver medal in the weightlifting category, the actor was inspired and decided to train harder in her workouts. She shared a workout video on Instagram and tagged the Olympian. “Sunday inspiration,” she wrote. Samantha‘s trainer Arunava Bhattacharyya also reposted the video and wrote, “Yeah!! We killed it on a Sunday as well.”

On the work front, Samantha was last seen in The Family Man, Season 2, where she played the main antagonist.