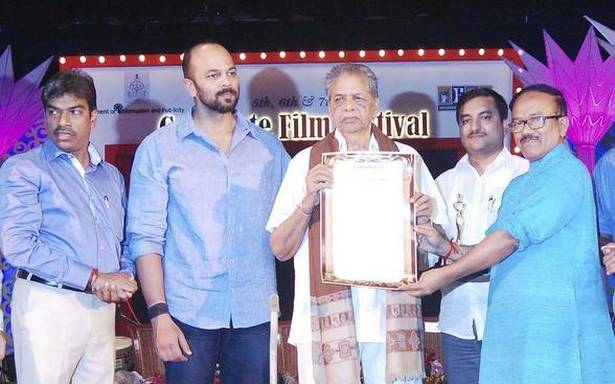 National-award winning editor Waman Bhonsle passed away on Monday morning at his residence in Mumbai due to age-related issues, a family member said. He was 87.

Bhonsle, who won the best editing award at the 25th National Film award for "Inkaar", died at 4.25 a.m. at his Goregoan residence, his nephew Dinesh Bhonsle said.

"Last year, because of the lockdown, his routine life and movement were restricted. He started losing memory and appetite," Dinesh told PTI.

Born in Pomburpa village in Goa, Bhonsle came to Mumbai in 1952 in search of a job and later started training under his family-friend, "Pakeezah" fame editor DN Pai, at the Bombay Talkies.

He then worked as an assistant editor at Filmistan and Famous Studio for more than a decade and eventually made his start as an independent editor for Raj Khosla’s film "Do Raaste" in 1967.

“It was the first national award in the technical category, he was immensely happy,” recalls Dinesh.

Amol Palekar-directed “Kairee” was Bhonsle’s last film as an editor.

He took a retirement from editing in early 2000.

Bhonsle’s last rites were performed at a crematorium in Goregaon in the afternoon. The film editor is survived by his wife, one son and three daughters.

Several colleagues and his industry peers took to social media to offer their condolences.

Filmmaker Subhash Ghai fondly remembered Bhonsle as a “genius” and a “great teacher”.

“RIP Waman Bhonsle sir. A GENUIS film editor in my first film KALICHARAN remained my editor teacher in all my films till Khalnayak and inspired me to edit my film like TAAL and so on. A Great teacher,” he wrote.

Filmmaker Madhur Bhandarkar said he feels fortunate to have worked with Bhonsle in the initial days of his career.

“Sad to know demise of Master film editor Waman Bhonsle ji. I was fortunate to have worked with him during my initial days in my career. He will always be remembered for his craft #OmShanti,” he said, naming a few films of Bhonsle’s career.

“RIP Waman Bhosle. A sad day for cinema!” he said.

Noted writer-lyricist Varun Grover shared the news of Bhonsle’s demise alongside a link of a rare video interview of the legend.