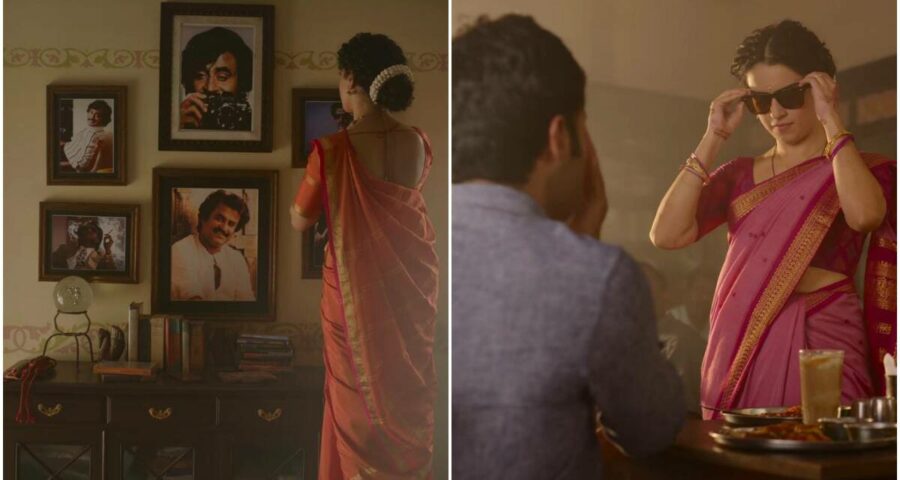 Meenakshi Sundareshwar is about a couple from Madurai, Tamil Nadu, who is forced to make a long distance relationship work. Sanya Malhotra and Abhimanyu Dassani starrer Meenakshi Sundareshwar got a rough reception after its teaser was released earlier this month. Netizens took to Twitter to express their displeasure for stereotyping Tamil culture and adding forced references, including the one for Rajinikanth.

At the trailer launch of the Netflix film in Mumbai on Thursday, the director of the film Vivek Soni addressed the issue. While he said he can only comment on his film and not Bollywood at large, he addressed the Rajinikanth reference, “I know there are a lot of great actors down south, like Ajith, Surya, Vijay, but for me personally, after MGR, there is no bigger superstar than Rajinikanth. He is my personal favourite, and that is the reason we chose Meenakshi to be a fan of Rajini sir as such.” He added, “Apart from that I don’t think there is any stereotyping in the film.”

About using certain Tamil words in the film, the debutant filmmaker said, “We have made a Hindi film set in the south, eventually it is a Hindi film. I could make a Tamil film, then it would become a regional film, which wouldn’t be a bad thing either because we have some fantastic films there. But, I essentially wanted to make a Hindi film. We could have kept an accent too, but we didn’t want to do that, because that would be stereotypical. We didn’t want to do that, because then it would look like we are making fun of the language. We have only used a few words to add flavour.”

Head of Creative Development (Scripts) at Dharma, Somen Mishra pointed out that there are no ‘aiyyos or accent’ in Meenakshi Sundereshwar. He said, “Let’s watch the film and then discuss this issue, let’s not shoot after just seeing the teaser or the trailer. Let’s not bring down a new filmmaker’s work based on past mistakes of other filmmakers. It takes years to make your first film so it is important for us to understand what is their gaze, and where they are coming from. Their love, passion and honesty build their gaze, and it can’t be exactly similar to what previous filmmakers have done in their films in the past.”

Meenakshi Sundareshwar is backed by Karan Johar’s Dharmatic Entertainment. Starring Sanya Malhotra and Abhimanyu Dassani, the film will stream on Netflix from November 5.