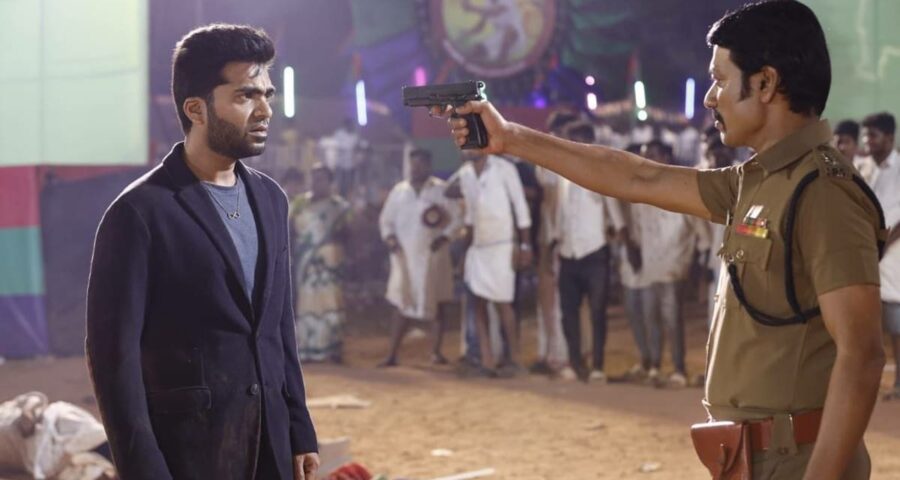 Maanaadu movie review: Director Venkat Prabhu has several catchy ideas and has engagingly strung them together. If somebody were to write a book on Simbu’s life, there won’t be a boring or uneventful page in it. So much has happened in Simbu’s career and life in the last 10 years: he found love, he lost love. He flaunted six pack abs and then he became overweight. He had blockbusters and he had none. At times, his career seemed to be picking up and then it seemed it was verging on total collapse. Some big names in the industry threw their weight behind him during his trying times. And then it seemed he was all on his own and became an outcast of sorts in the industry, which he has been part of since he was a child.

In the past year, Simbu seems to have hit the reset button. And he’s trying to reverse all his past mistakes by not repeating the same going forward. From losing all the extra weight he gained during his downtime to completing the shoot ahead of schedule, he seems to be getting on the right track. And he couldn’t have asked for a better film than Maanaadu to begin his new innings in his career. The film is about a hero who has the power to reset the day, which allows him to right every wrong he committed at every step of his way.

You see our hero Abdul Khaaliq (Simbu) is not travelling back in time. He simply gets to live the same day over and over again, until he gets it right. It calls to our mind at least three major Hollywood blockbusters where the protagonist is in the same predicament: Bill Murray’s classic Groundhog Day, Tom Cruise’s modern epic Edge of Tomorrow and of course, Andy Samberg’s latest romantic comedy Palm Springs.

Abdul Khaaliq travels to Ooty from Dubai to help his friend, played by Premgi Amaren, whose girlfriend is about to get married. The plan is simple: gatecrash the wedding, find the girl, take her and drive away from the wedding venue before anyone could notice that the bride is missing. But, Khaaliq ends up being part of a big conspiracy to assassinate Tamil Nadu Chief Minister Arivazhagan (SA Chandrasekhar). Masterminded by Dhanushkodi (SJ Suryah), the conspiracy is to kill the CM, blame it on a Muslim man, and orchestrate communal riots to disturb the peace of the state for the political gains of a few. Again, with Khaaliq’s arrival, Dhanushkodi’s perfect murder plan gets upset.

Khaaliq has to keep dying until he prevents maanaadu (the political gathering) from happening or many innocents will get hurt. Director Venkat Prabhu, who has also written the film, gets many things right. And he has also been very clever by embracing ambiguity in dialogues, which gives him protection from endless controversies and lawsuits. Khaaliq refers to many incidents that caused political storms in the country but never gets specific. “Something like this happened some time back no here.” And when Khaaliq says it more often than once, we know what exactly he is talking about without Venkat getting into trouble.

Venkat also gives a mythological heft to Maanaadu by effortlessly weaving the legend of Kala Bhairava into the backstory of communal riots. Venkat has several catchy ideas and has engagingly strung them together. But, when all the fun settles, if you are burned by some knowledge of film history, you will understand that this movie is nothing more than Venkat piecing together different bits from various blockbuster films. And what’s missing is some detailed writing that lets us into the minds of the characters. What we get instead is a few generic lines about how it is wrong to alienate a whole community for political gains. We already know it’s bad, no need to repeat it. What we want is films dealing with such subjects to take us to a different place and open us to a new emotion, which remained buried in plain sight until now.

But, Maanaadu offers more reasons to celebrate it. In particular, SJ Suryah’s performance, which brings the circus to the town. He draws genuine laughter with his reactions to mind-boggling events. And also he knows exactly what is expected of him and he delivers it perfectly. The editing of the movie is another big plus. Editor Praveen KL’s work brings a lot of clarity to the movie, which makes it enjoyable for a wider audience, who doesn’t have to break their head to understand the concept before they could appreciate the narrative, which plays in a loop.

The endless loop and the seemingly endless efforts of the protagonists to get out of the time trap has an innate novelty to it. You respond to such movies like many characters in these films as if you are watching such a concept for the first time. We don’t get bothered by the last film with the same theme as long as the current movie is enjoyable.