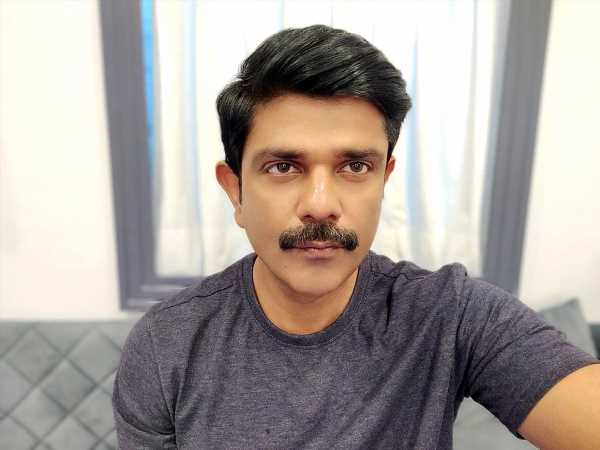 ‘And it always should be.’
‘I believe nothing should come easily to anyone because then there is no thrill in it.’

Amit Sial has been acting for close to two decades, but gained attention for his role as the devil-may-care Devender Mishra in Amazon Prime Video’s Inside Edge. His resume also includes Mirzapur, Jamtara: Sabka Number Ayega, Maharani, Kathmandu Connection and the recently released Qala.

The actor, who will be seen next in Kathmandu Connection S2, is now aiming to notch up leading roles.

“I am trying to wake up from the world that I have become comfortable in,” Amit Sial tells Rediff.com Contributor Mohnish Singh.

The first season of Kathmandu Connection was well-received. Tell us something about season 2.

Season 2 is connected to the first season. There are some new entrants this time around, specifically Prashant Narayan who is one of my favourite actors.

There’s Harleen Sethi as well, who is amazing in the show.

And since the story moves forward from the first season, you will see some those primary characters in season 2 as well. They will be reprising their roles in a new environment and in new surroundings. Do you feel OTT has shaped the career of many actors like you who probably did not get the right opportunities in the movies?

And it’s not just actors; OTT has opened doors to more opportunities for every creative person, be it writers, directors or (film)makers.

See, the world of films is very small; it does not have enough space for everybody.

OTT offers a larger space for people to play around in as compared to films. It has obviously opened doors for everybody.

How would you say OTT has contributed to your career?

It has contributed immensely.

I got my recognition with Inside Edge, which is an OTT show. I have done a few more shows on various OTT platforms.

It is not just me; a lot of other actors got their due on OTT. Some of them are now jumping into films now because now they have become known.

There is a huge amount of economics involved in creating something, be it films, TV shows or OTT shows. Producers and financiers need to have some kind of confidence when they invest their money on actors and technicians. I think OTT has given them that confidence. What convinced you to leave your hometown, Kanpur, and come to Mumbai to become an actor?

All I wanted to do in life, even when I was a kid, was to become an actor.

But I never thought — in fact, I never even dreamed — that one day, I’d be living here in Mumbai and that my passion would become my source of livelihood.

I have always been happy, content and relaxed in whatever I am doing; I live in the moment.

I just want to progress in life; I want to keep evolving. And I always jump at an opportunity when it presents itself.

After finishing school, I left Kanpur to join a college in Delhi. It was a new place; I was exposed to a new kind of life. I met new people — people who were better than me. I learned a lot of new things from them.

That’s where I bumped into Barry John. I worked with him for 3-4 years; I did theatre.

Then, I went to Melbourne. There was another set of life experiences waiting for me there.

Now I am in Mumbai, working as a professional actor. And it is my life’s journey that has made me the actor I am today.

Surviving in a city like Mumbai is not easy. How challenging was it for you?

Challenges are only presented by your inner self.

You have to overcome your insecurities and your fears. That is what life is all about.

You have to persevere; you have to go through the grind and be hopeful that, one day, all your experiences and all your learnings will come in handy.

If you are persistent enough, things do fall into place. In a recent interview, Nawazuddin Siddiqui revealed how there was a time in his career when some people did not give him certain roles because of the colour of his skin. Have you ever been in a similar situation? Does such discrimination still exist?

Yeah, it does; it is bound to. And there are no wrongs and rights about it. It is what it is sometimes and you have to take it at face value.

But that does not stop anybody from striving hard and creating a niche for themselves.

When he got the opportunities, he made the best of them and see where he is now.

In an earlier interview, you said you want to headline projects. Are such opportunities coming your way?

Life is difficult. There is no question about that.

It will always be difficult and it always should be; I personally believe nothing should come easily to anyone because then there is no thrill in it.

If you are content with what you are doing, then there is no growth. You won’t evolve.

But life happens to everybody at some point. It has happened to me.

And I want to do this for myself and not for anybody else.

Now, I am trying to wake up from the world that I have become comfortable in. And I am doing it for myself rather than for anybody else. I have done some things which are completely different from what I have been doing in the past. Hopefully, they will release early next year. What has been the turning point of your career?

Definitely Inside Edge. I got a lot of freedom in what I wanted to do with that character.

People and the critics noticed my work. As I said before, the opportunity presented itself and I made the most of it.

Is there any genre that you have not yet explored and want to?

Yeah, I really want to do some romantic roles.

I have been playing these intense parts for a long time now. I want to do comedies.

And I have done it in one of the projects set to release next year. So, while that hunger is somewhat satiated, I want to do more of it.

I would like to do lighter roles, common man’s roles.

I am trying to get away from doing intense performances all the time. But people think I am more suited to them, so they keep offering me such roles. And I do not mind that at all.

At the same time, I would like to explore all genres. Any actor would.

On a lighter note, who would you like to romance on-screen?

I have no idea, man.

I feel we have so many beautiful actresses out there. Hopefully, one day, I will get to work with some of them.

It has to be a good story, helmed by a good director with a good team. How has your friendship with Randeep Hooda stood the test of time?

It is still going pretty strong.

We are more than friends; we are like brothers. We have known each other for almost 25 years. We have seen each other’s ups and downs in life and shared every important moment together.

It is a very strong bond. Hopefully, it will stay that way for the rest of our lives.

Why should the audience watch Kathmandu Connection 2?

It is a thriller, but it is also very dramatic. There are some great actors working in it.

It is an interesting entertainer. We have done what we had to. The ball is now in the audience’s court. I hope they watch it and let us know what they think, so that we can create the next instalment.