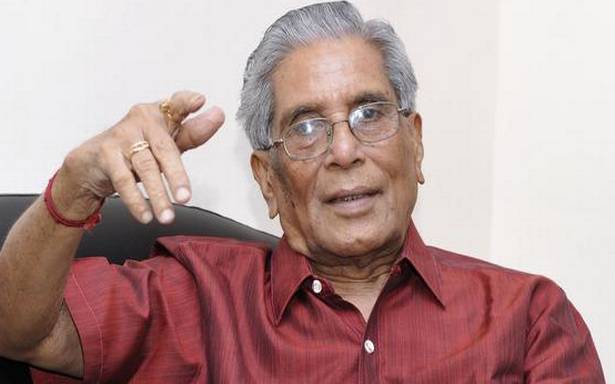 Award-winning legendary filmmaker K S Sethumadhavan, who helmed a handful of iconic and path-breaking movies in Malayalam, died at his residence in Chennai, film industry sources said on Friday. He was 90 and was not keeping well for some time due to age-related ailments, they said.

A multi-time recipient of the national and state awards, Sethumadhavan directed over 60 movies in five languages during his career spanning many decades since early 1960s.

Besides Malayalam, he directed movies in Tamil, Telugu and Hindi.

Born in 1931 in northern Palakkad district of Kerala, he entered into tinsel town as an assistant director to K Ramnath. After launching himself as an independent filmmaker through the Sinhalese movie “Veeravijaya” (1960), he directed his first Malayalam film “Jnana Sundari”.

It was Sethumadhavan who introduced the iconic Kamal Haasan as a child actor in Malayalam through the movie “Kannum Karalum” and in the lead role through his film “Kanyakumari”. He was also known for giving silver screen adaptations for iconic works in Malayalam literature. ‘Venalkinavukal,’ a 1991 movie based on the script of Jnanpith laureate M T Vasudevan Nair, was his last outing in Malayalam.

Sethumadhavan received the J C Daniel Award, the highest honour in the film sector instituted by the Kerala government, in the year 2010. He is survived by wife Valsala and three children.

People from various walks of life condoled the death of the veteran filmmaker.

In his message, Chief Minister Pinarayi Vijayan said the demise of Sethumadhavan was a loss not only to the film industry but also to the entire cultural arena of the southern state.

Stating that he was a director who introduced an innovative approach in the Malayalam industry, Vijayan also said Sethumadhavan’s role in making movies acceptable to all sections of the society is noteworthy.

The filmmaker also paid attention in making the themes of Malayalam movies, which had once been confined to the stories of Gods and kings, to be more “human-centric”, the Chief Minister added.