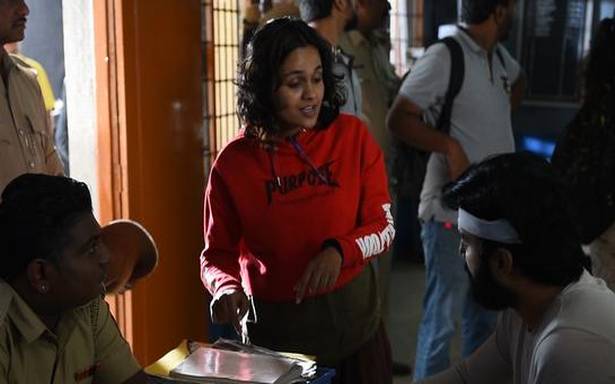 She is a familiar face on Kannada news channels. Sheethal Shetty, who has anchored many news shows is now creating news herself. She is not only acting in the thriller 96, directed by Jayanth Seege, but is also set for her directorial début with Window Seat. Produced by Jack Manju, the film stars Nirup Bhandari, Amrutha Iyengar amd Sanjana Anand.

The songs composed by Arjun Janya, were released online to much appreciation from stars and audience.

Sheethal’s career in films started off with a role in Rakshit Shetty’s Ulidavaru Khandante, where she plays an investigative journalist. 96, where she plays herself, is set for a theatrical release.

She talks to MetroPlus about the challenges of making a film.

When did the switch from journalism to acting happen?

I was always interested in movies and have been a film buff. The actual trigger happened when I worked in Ulidavaru…. I was bowled over by the theme of the film and the manner in which it was made. That inspired me and I started writing Window Seat.

Has your profession helped you in your passion?

Definitely. Being a journalist, you are well informed, have easy access to information, contacts, get to meet people from various fields and know many stories.

Making a film is tough. Conceptualising a film and realising your vision are very different things. I discovered the challenges of making a film when I actually stepped into the pool of filmmaking.

Could you tell us about your role in 96?

I play myself. I have used my name in the film and play an ex-journalist. The film was shot in my office, but only that much of Sheethal Shetty is true to life. The character and the story is a blend of fiction and reality. It is similar to AK v/s AK. Jayanth had crafted the idea long ago, but we did not get attention because we are a small budget film. The film was screened in BIFFes last year and was received well.

When did the direction bug bite?

I met with an accident in 2014. I was advised bed rest and had nothing to do. That is when I started writing Window Seat. When friends heard it, they encouraged me to direct it. I laughed hard at the thought, but they pushed me into it and that is when I took the plunge.

You have made short films earlier…

Yes. I had to see if I had it in me. I directed Kaaru and Sangaati, which are now available on Shee Tales. When I approached a few major producers, these were the films I showed along with the script of Window Seat. That brought Jack Manjoo on board as the producer. He was a huge strength as I was a first time director and his experience in promotion and releasing the film came in handy.

What has your experience as a director been?

One observation I made was that there are hardly any women directors. When you approach people, they look at you with doubt wondering if you will be able to pull it off… But, luckily for me, with Window Seat Nirup was encouraging.