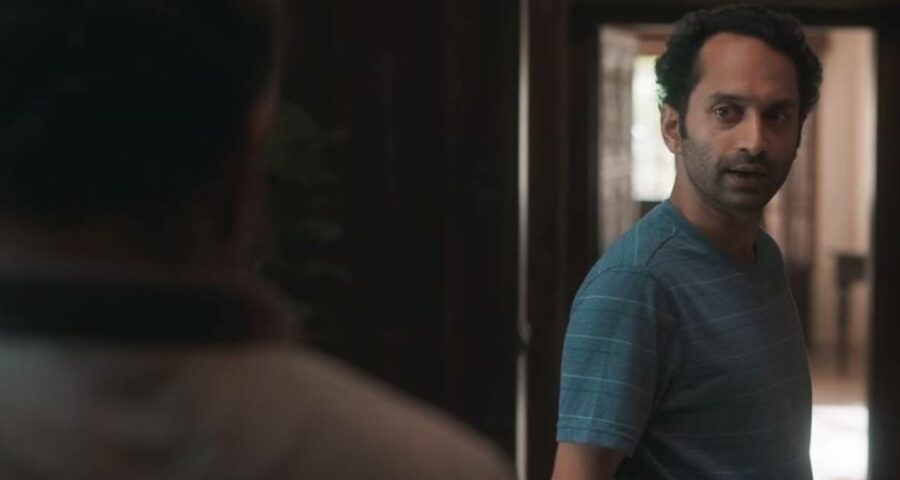 Joji movie review: Scriptwriter Syam Pushkaran, director Dileesh Pothan and actor Fahad Faasil are long-time collaborators, and the smoothness in their latest coming together is proof that story is king. The powerful head of a wealthy Kottayam-based family is felled by a stroke. How the impact of Kuttapan PK’s (PN Sunny) illness ripples outwards into his large homestead, makes up the bulk of Joji. Grown men infantilised by a domineering father scramble to make sense of their world, which has till now been a one-way ticket — the meek execution of orders rapped-out-and-received. Roiling frustration, anger and fear make for a combustible situation. Something has to give, and of course it does.

Joji, based on Macbeth, doesn’t waste a single moment in getting into the meat of the story. The bull-like ageing patriarch towers over his sons, the heavy-set Jomon (Babu Raj) who most resembles his father in build; the stocky Jaison (Joji Mundakayam) who is the obedient, dutiful one; and the slight Joji (Fahadh Faasil) an engineering drop-out with wayward ways. Teenaged grandson Popy (Alister Alex) wanders about aimlessly. In this universe of men, a sole woman, Bincy (Unnimaya Prasad), folds the fort, crumbling under the upheavals caused by the old man’s now-critical-now-stable condition. How long will he last?

The slow burn of tension and dread is skillfully built up in the ace writing of Syam Pushkaran, whose last outing was the wonderful Kumbalangi Nights. Pushkaran, director Dileesh Pothan (Maheshinte Pratikaaram, Thondimuthalam Driksakshiym) and Fahad Faasil are long-time collaborators, and the smoothness in their latest coming together is proof, if it were ever needed, that story is king, and that everything flows from a great screenplay.

Each character is etched with care. The high prevalence of alcoholism, a serious problem in Kerala, shows up in Jomon’s constant state of belligerent inebriation. Jaison is hobbled by his habit of being a pleaser. And Joji, who feels his father’s lashing contempt the deepest, goes down a path from where there’s no coming back. Jincy, who is as desperate to be free of the shackles of the toxicity surrounding her, is complicit: everyone is flawed, everyone is responsible for the multiple tragedies that follow.

Shakespeare’s grand meshing of crime and punishment in Macbeth has spawned many film and stage versions in many languages around the world. Joji picks up the overarching theme beautifully (both writer and director have incorporated crime and punishment most innovatively in their previous work). The only time the film loses its grip, ever so slightly, is in the way it slides on the guilt which is part-and-parcel of a killing, and rolls towards an ending which feels pat. I wanted to see more of how the ‘damned spot’ would deepen, and how everyone, especially Joji, would experience it: the climactic coda feels a tad hurried.

Other than that, what a pleasure to see a richly atmospheric film in which everything works according to plan, the performances all spot on. Sunny’s empty glare is shudder-inducing; Raj’s love for his father, despite everything, floats like curdled cream; Prasad’s Bincy reveals what a burden it is to be the wife of a man who cannot stand up for himself.

Faasil makes the most of his weak, silly Joji, whose craftiness is not enough to save him from his sins. A newly arrived parish priest (Joseph) who presides over the old man’s funeral senses the unease in the house, which starts emptying of light as we go along. Did the sinner get his just desserts? Or was he just a victim of his circumstances? And who really is the victim? The man who is killed, or the man who kills? These are storytellers who know their craft, and they know not to spoon-feed us: we, the viewers, get to decide.