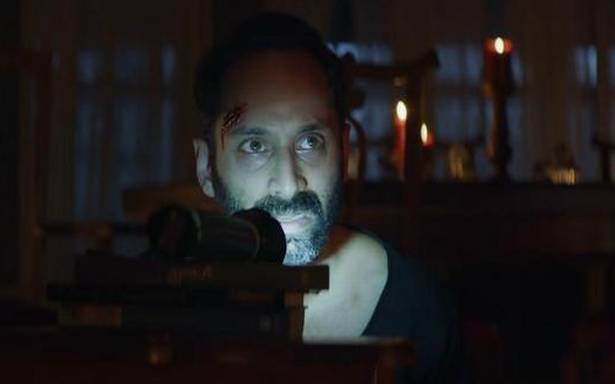 Despite a great cast, the accomplished performers do not really get to show their prowess, due to the weak script and dialogues

In the initial parts of Irul, when one sees the usual tropes of horror-thrillers, complete with a grand mansion in a secluded area at night, a stranded couple, and a mysterious man who seems to own that mansion, one expects the script to have some delightful tricks up the sleeve to upset our expectations.

However, here the effort seems to be to ensure that the viewers don’t get too much of a surprise and to not try anything out of the tested path. A writer Alex Parayil (Soubin Shahir) takes his girlfriend Archana (Darshana Rajendran), a lawyer, on a weekend getaway. During the night ride, in the pouring rain, the car breaks down. They take shelter in a nearby mansion, where they are welcomed by a mysterious man (Fahadh Faasil). But things, as expected, take a darker turn soon, with events paralleling those from Alex’s recent book Irul seeming to have taken place there.

Right from the beginning, director Nazeef Yusuf Izuddin places the viewer in Archana’s shoes. She does not know where Alex is taking her. She has not read Alex’s book, which she learns from the conversations between him and the man at the mansion, is about a serial killer. She is also, just like the viewer, caught in confusion of whom to trust between the two men, both of whom tell her equally convincing stories to explain the happenings in the mysterious mansion.

Yet, beyond the customary jump scares, the film never really manages to send chills down your spine, even at the heights of the confrontation between the two men or when the three of them go down to the cellar to explore the mysteries in there. One standout scene is a shouting match between the three characters, which might serve to disorient the viewer, who is already confused about the motives of the two men.

Some of the dialogues and exchanges have a tinge of artificiality and a staged feeling about them. This is especially so in the discussion about Alex’s book. Those discussions though throw up interesting tangents on how much the personal experiences of writers matter in the content that they produce, but these remain as mere diversions. Even in a film with just three characters, the accomplished performers do not really get to dazzle the audience.

If only at least half of the attention that was paid to the sound design and the art direction, was given to fleshing out the script and working on the dialogues, Irul would not have felt like the half-baked, half-hearted effort that it ended up as.

Irul is currently streaming on Netflix