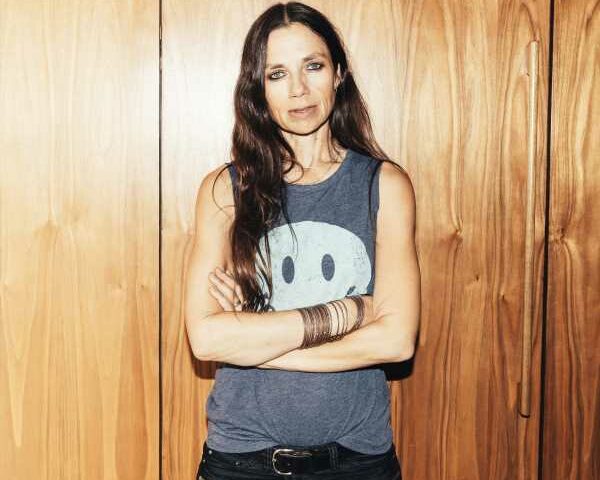 ‘If someone is consistently horrible to you, for me, I would ask myself, what am I doing?’
‘Why am I continuously putting myself as a target for this?’ Bateman went on to act in several films and television shows, including Arrested Development and Desperate Housewives.

Decades after she entered the entertainment industry, Bateman has directed her first feature film, Violet.

The film premiered at the SXSW festival this spring and was recently shown at the Toronto International Film Festival.

In the film, Olivia Munn plays the title character Violet, a successful executive in a small Hollywood film production company.

Despite her career success, Violet’s mind is preoccupied with negative thoughts, spoken out in the voice of Justin Theroux.

Scribbled messages on the screen also play with Violet’s state of mind.

Violet is a woman on the verge of a nervous breakdown when she moves in with an old friend named Red (Luke Bracey).

Bateman’s smartly edited and terrifically directly film shows us how Violet will find the way out of the mess around her and how the puzzle in her head will be solved.

Bateman tells Rediff.com Senior Contributor Aseem Chhabra, “A lot of my life was based on fear-based decisions.”

Justine, I have mostly known you as an actress from the time I saw you in Family Times, You have made a couple of short films, but why did it take you so long to direct your own film?

I thought I was more of a writer.

I fell into acting and it was good to me for a long period.

But then I was writing again.

I wanted to direct since I was 19, but the timing never felt right.

I then went to school and got a computer science/ management degree. When I came out, I thought I would have an executive job in entertainment.

But that is when I realised the timing felt right to direct one of the scripts I had been saving in my computer.

So I made two shorts.

I highly recommend anyone who wants to direct a feature to first make shorts.

Then I raised the money to make Violet.

We were prepared to have it premiere at SXSW in 2020 but it got cancelled.

After all the time of waiting to direct, raising the money, making the film and finally, you are ready to put it out, and it gets cancelled at the last minute. That was very disappointing. You have worked with so many directors on TV shows and films. Who were the directors and what kind of cinema inspired you?
This is a very complex film in terms of layering so many thoughts, ideas and voices.
Where does the director come from within you?

Almost every weekend we would go to the arthouse theatre in Los Angeles called the Nuart. I would see double bills of Antonioni’s and Fellini’s films and Godard.

That was foundational in my film development.

I love films that have metaphors.

I like those kinds of films because they jumble what you expect.

When that jumble happens, I am so much receptive to where the filmmaker is going.

I am paying attention more closely.

Or films that take place in a parallel universe such as Yorgos Lanthimos’s films (Dogtooth, The Killing of a Sacred Deer). He’s a fantastic director.

Or any film where they use the camera that realigns how I look at things.

Even what the Coen Brothers did in Raising Arizona, where the camera is almost a character.

I love that kind of film-making where someone is making an art project with the film, not just recording what’s happening.

Sometimes just locked up recording can be interesting too, but there has to be a reason behind it.

You have to be able to explain and defend everything you are doing.

I was told when I was growing up that your inner voice speaks the truth, it’s pure and we should believe it.
That’s the good voice that guides you through your life. But you do the opposite in the film.
Violet’s inner voice in the film is frightening, and Justin Theroux is so good as the narrator.

For me, there are essentially two things going on.

My instinct about things and my critical or fear-based thoughts — oh no, if I do that then this will happen?

Violet is living a life that is mainly made of fear-based decisions, and she realises that doesn’t work anymore.

She wasn’t aware of it before.

Red is, of course, leading an instinct-based life. He’s guided by his instincts.

I understand there is something inside us. It’s not necessarily between what’s right and wrong but the sense that it feels right or wrong for me to go in a particular direction.

I feel that instinct is tapped into the timing.

When people turn away from the timing and try to force things into happening, it doesn’t feel right when it occurs and the results will be some kind of a mess you will have to clean up.

Violet and Red are two ends of the visible life spectrum.

She needs to traverse that life spectrum to the way Red lives his life. In that sense, Violet is a map to that bridge. You mentioned earlier about experimental cinema and how important it is for you to be engaged with what’s happening on the screen.
Your film is so immersive and as an audience member, one is completely pulled into it. And there are so many different thoughts that are happening. Tell us about the different ideas.

Thank you. Yes, immersive was exactly what I was going for.

A lot of my life was based on fear-based decisions.

There were a few things that got me out of that.

One was taking those thoughts and looking at them objectively.

Yes, they are in my head, but what if someone else was saying it instead.

Wouldn’t I have a little doubt about the voracity of what they are saying?

That helped me think, would that really happen? That worst-case scenario.

That’s why the inner voice is very different from hers.

I wanted the audience to reflect on their lives as they heard the voice.

I wanted the viewer to be the most important character in the film.

I didn’t know I would be doing that but after I looked at what I thought was a final cut with my editor Jay Friedkin, I knew I didn’t have a thesis statement.

It’s important for me to have that statement in every film I do or every scene I shoot.

I knew I hadn’t locked into that yet.

What I was missing was passionate desperation to get out of where she was. So I realised that I could just write it on the screen.

I didn’t know it would work but in doing that, it created this great pressure cooker on Olivia Munn’s performance, where you have the voice that is pressing down, the writing that is trying to emerge.

In between, she is barely holding it together.

Have you heard of the Kuleshov Effect (named after the Russian film-maker Lev Kuleshov)?

He recognised if he juxtapositioned two shots, say a man reacting to something and another shot of a bowl of soup, and asked the audience what the man was feeling, they would say he is hungry.

But instead of the soup, you showed a woman in a bathing suit, the audience would say the man is lusting after her. But, in fact, we are shown the exact same footage of the man.

Advertising uses that a lot.

They will take an image and then put a word on it. That will inform you about the image.

It’s hard for the brain to separate that afterwards. The brain marries the two sets of information.

Finally, the red tone is used in the film, when Violet is numbing out.

So you can hear her thoughts and sometimes it becomes too overwhelming to reject them, so you wind up saying them yourself.

That also happens to her boss. He’s seized by all these fearful, negative thoughts.

He feels unappreciated and let these thoughts speak out to other people. It’s an exciting challenge for the audience. I was so engrossed in it and didn’t want to miss out on what was happening. The film is not a thriller, but it keeps you on the edge of the seat. Was that your intention?

I’m glad it feels like that. I think it’s definitely a film that people, who are interested in it, might want to watch a couple of times.

The reason why I showed all of it is because that is what’s happening when we are in these situations. And it’s all happening within fractions of a second.

We are accustomed to negative thoughts even if they are not in the forefront.

The desire not to make a decision is there. At the same time, you are having a conversation with somebody else.

Incredible number of things happen in our brain at the same time.

I am illustrating just a few elements of that.

It’s even far more complex than what I show in the film.

You make Violet do a few things in the end — burning bridges is the expression I can think of.
Her aunt is mean to her and her brother is not the nicest person. Her mother has messed up her life. But we still expect people to maintain these relationships.
You make her do the exact opposite and her character is happy.
I wonder if that’s your message that we should do what is important in life to us first and foremost and we should forget about nasty relatives?

Well, if someone is consistently horrible to you, for me, I would ask myself, what am I doing? Why am I continuously putting myself as a target for this?

Violet has these people who are consistently trying to push her buttons.

So she has to ask herself, is there a fear that keeps her from not participating anymore? We should ask, what would happen?

It is a question for each individual person.

There are people in our lives that aren’t so nice, but we have a long relationship.

We may know how to deal with them and not take them seriously.

But when you are in situations that are so aggressive and there’s nothing to counteract that, then it is good to ask, what will happen if I don’t return their call?

Sometimes we are so accustomed to going along, we don’t realise we have a choice.

I do believe that any kind of expected relationship — a teacher-student or with a family member — only makes sense when both sides are holding up the ends of their bargain.

If one person is behaving so carelessly with your feelings that if you were only friends, you would definitely not see them again… Or at least you say, I am going to take a break from this for some time.

You have been in the entertainment industry for so long. The story you narrate — Violet’s story and her life in the film business — is that all true? The sexism, the parties, the office atmosphere.

I set it in the entertainment business because I wanted to put Violet in an aspirational position of what she does in this nice town.

I wanted to eliminate all the variables outside of her that any viewer might point out to say, ‘Oh, that’s why she feels insecure because she has this bad job’ or ‘She’s in a bad town.’

I also wanted it to be helpful to some who’s having a challenge with the negative thoughts and to see someone who’s in an enviable position who is also going through a struggle.

I have not personally experienced sexism or misogyny in the entertainment business.

But I have definitely experienced it outside of the entertainment business, just in everyday life.