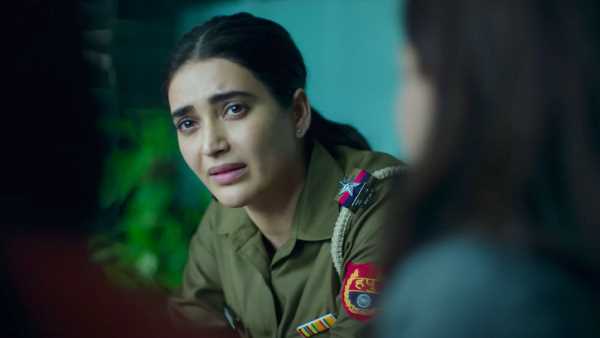 Hush Hush starts on a mysterious note that sustains our curiosity for the first few episodes. Then it veers off in different directions aimlessly, notes Divya Nair.

If you were to log in to any OTT service today, chances are at least one or two of the top five ranked series is a crime thriller.

So what inspired Tanuja Chandra to be a part of yet another?

In fact, the talented director roped in both Juhi Chawla and Ayesha Jhulka to make their OTT debut with her.

Hush Hush, directed by Tanuja along with Kopal Naithani and Ashish Pandey, is the story of four friends, who get tangled in a murder mystery involving one of them.

Zaira (Shahana Goswami), a leading fashion designer, Saiba (Soha Ali Khan), a former journalist with a happy family of a supportive husband and two children, and Dolly (Kritika Kamra), an unhappy daughter-in-law of a business magnate, are friends with Ishi (Juhi Chawla), a successful public relations professional, who is caught in a scandal.

At a party, the friends bump into Ishi, who is arguing with a man who also threatens to kill her.

In order to save their friend, Dolly fires her gun, but ends up killing the man whose identity is unknown.

Zaira and Ishi dump the body in a nearby lake.

Ishi then convinces them to go home and promises to take care of everything.

The next day, Ishi is found dead in a closed room.

Although forensics paint a certain story, it is not clear if Ishi was murdered or she committed suicide.

Enter Tehlan (Karishma Tanna), a no-nonsense cop, who picks up the scattered pieces of this puzzle and tries to solve the case.

Among the last people to meet Ishi is Meera Yadav (Ayesha Jhulka), her childhood buddy, who runs a shelter home.

As skeletons tumble out of the closet, the friends are in for a surprise.

It would seem like the Ishi they knew had a lot of secrets.

Was she a liar, an enigma, a fighter or a soft target of an unscrupulous system of hypocrites?

As the investigation proceeds and the noose tightens around the culprits, the plot thickens, presenting several perspectives of a dark crime.

The seven-episode series starts on a mysterious note that sustains our curiosity for the first few episodes.

Then it veers off in different directions aimlessly.

Instead of creating shock and awe, what you get is a predictable template.

The series is let down further by lack lustre performances of the leading women, particularly Juhi Chawla, whose enigma doesn’t excite you enough to discover the truth behind her death.

While Shahana and Soha have meatier roles to play, their characters lack the depth it requires for you to relate to them.

Unlike in Delhi Crime, where you are presented a realistic portrait of the honest, hard-working cop, it is surprising to see Tehlan get her work done without much hiccups purely because of her ‘gut feeling’ and trust with her senior.

Kritika Kamra, as Dolly, is perhaps the only character I could somewhat relate to. You will agree with her natural annoyance for her in-laws and family members, all of whom convince her to ‘adjust’ and ‘ignore’ the unsuccessful parts of a marriage.

At the end of seven episodes, each lasting over 40 minutes, it is not clear how the four of them met each other or became friends.

Or how Ishi, who grew up in an orphanage, rose up to the ranks and became a successful professional.

Juhi Chawla should have chosen a better OTT debut because this one is as forgettable as the body dumped in the pond that no one truly cares about.