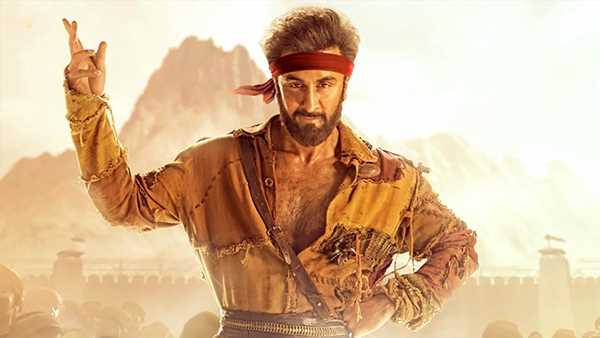 ‘Everything happens at the right time.’
‘Shamshera came at this time, but unfortunately, my father is not there to see it.’

Ranbir Kapoor says wife Alia and he want to have “lots of kids”.

But before Alia and Ranbir’s first child is born in November-December, work beckons.

Ranbir, who is promoting Shamshera, his first film in four years, tells Rediff.com Contributor Sameena Razzaq, “We take it for granted that in a Hindi commercial film, leave your brains at home and come. But you can’t be part of those films anymore. Today, the audience is not forgiving.”

Shamshera has you play a double role and it is your first period action film. How will you define this experience?

The script inspired me.

I offered myself to play Shamshera, and said baap bete ka rishta hai, it will be okay if the same actor plays both roles.

The selfish actor in me came out because it was a good opportunity for me as an actor.

We worked really hard to make the father and son different, not just in terms of looks, but also as individual personalities.

Both are different characters, so we had to give different shades to them.

Two big releases for you this year and quite close to each other. Will the performance of one film impact the other?

I didn’t plan this.

Having said that, they are very different films.

I have always believed that films are above me.

As an actor, I’m part of both these worlds.

Thankfully, both trailers are out. The audiences know what Shamshera and Brahmastra are about.

I’m keeping my fingers crossed that both work. Director Karan Malhotra feels you can’t get too loud; that you are subtle as an actor. What challenges did you face when you did Shamshera?

But it is important for an actor to understand the tone of every film.

The tone I had in Sanju is vastly different from Barfi! or Wake Up Sid.

If you don’t have conviction, it wouldn’t look great.

I am nervous as I don’t know whether the audience will like me in this film.

But I had great fun doing it as an actor.

Your characters have always been relatable. This is your first outing as the quintessential massy hero. What were your thoughts when you were offered this space?

I have been offered films of this nature, but this genre is the most difficult to pull off.

We take it for granted that in a Hindi commercial film, leave your brains at home and come.

But you can’t be part of those films anymore.

Today, the audience is not forgiving.

They want something entertaining, something new, refreshing and amazing.

When this film was offered to me, I was very grateful that they considered me.

It is a multi-genre film. You get to do action, romance, comedy, drama…

I have played characters who are coming-of-age, the underdog, where the conflicts have been inner.

I think for the first time, I had a villain — Karan Johar in Bombay Velvet — and you know the result of that.

This time, I have the great Sanjay Dutt.

All the key aspects of making a good Hindi commercial film are there in this project, and that’s how I came on board. Your late father Rishi Kapoor never approved of your choices of movies. What did he think of Shamshera?

My father was very happy that I signed Karan’s film.

He used to complain about my choices.

He told me never do those dhoti-wali films.

I told him that I am doing a Karan Malhotra film.

He asked me what the film was about.

I said it is about an 18th century dacoit.

He cautioned me that this director is not easy to work with. He will give you stress.

I had given the script to my mother to read. She is the only sounding board that I have.

She was very excited.

Rishiji always felt that you hardly do commercial films. How did you overcome ideological differences with your late father?

When he saw Barfi!, he had said’ acting tu theek karta hai, but try and do more commercial films.

He always had this complaint with me, but I was not convinced about doing films like the ones I am doing right now.

If Shamshera came to me 10 years back, I don’t think I would have the conviction to pull off a character like this.

Everything happens at the right time. Shamshera came at this time, but unfortunately, my father is not there to see it.

Hopefully, somewhere he is up there, smiling that finally I have done a film of his choice.