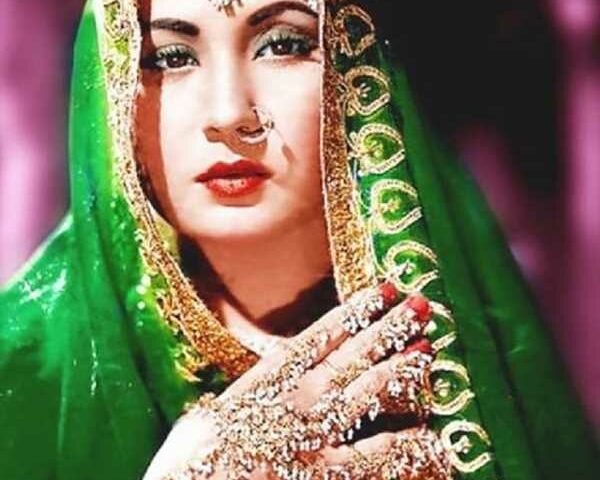 Did you know that Meena Kumari, on whom Pakeezah‘s greatest songs were picturised, couldn’t dance at all in the film?

Subhash K Jha gives us some lesser known about the late actress on her birth anniversary, August 1.

She was not much into worldly things and gave away all her possessions to her relatives. She died in the servant’s quarter of a mansion that she had gifted her sister. 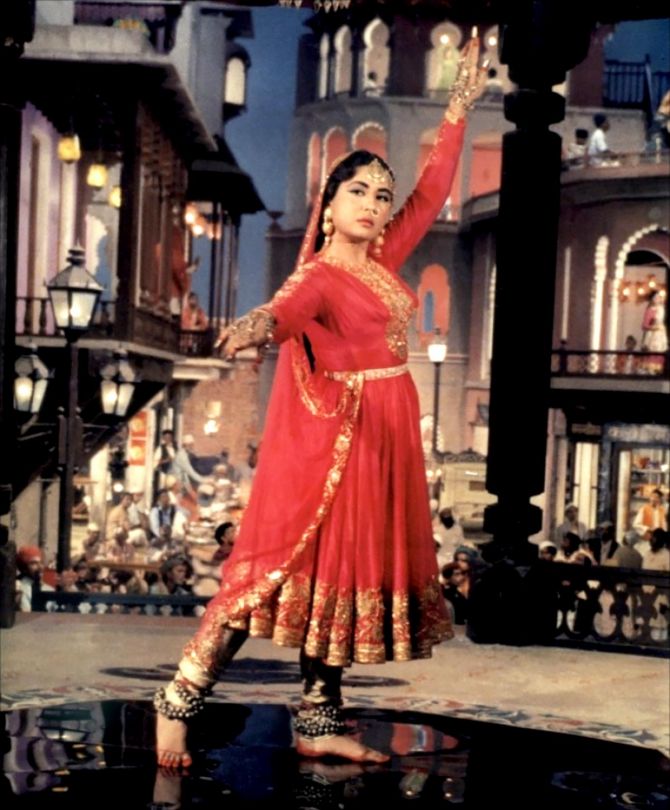 Meenaji couldn’t dance at all in Pakeezah.

But she loved to sing and has recorded an entire album of her own poetry I Write I Recite, composed by Khayyam.

In her films, she wanted only Lata Mangeshkar to sing for her.

Lataji recalls her association with the legendary actress: “I remember one day she called and introduced herself. She wanted me to come and sing in her house. I declined saying I don’t sing for private functions. She never held that incident against me.

“She often used to land up at the recording studio for my songs. One day for a recording for Hemant Kumar, I had washed my hair and left it open. Meena Kumari, who was very proud of her hair, looked at my hair and exclaimed, ‘Kitne lambe baal hain aapke!’ I told her I had never cut my hair in my life.

“My voice used to match her to perfection. What an artiste and fine human being!

“During the making of Pakeezah (which went on for a good 20 years), Director Kamal Amrohi, who used to treat me like a daughter, invited me home for song rehearsals. Meena Kumari was practicing her steps for my songs in Pakeezah. She turned to me and said, ‘When you sing, I don’t have to make any effort to act.’ I cherish that compliment. Sadhana had said something similar to me once.

“Meena Kumari often called to chat. She seemed very unhappy with her life.

“I met her at the Filmfare awards in 1968. She had became thin and pale. That year I had given up the awards, and she said, ‘It’s like the queen abdicating her throne.’ Later, I came to know she was extremely ill. When I reached her place with flowers, she said, ‘Allah, aap yahan aaye, main badi khush-kismat hoon.’ We chatted. She asked me for tea, though I sensed she was in no position to offer me anything except her warmth in that condition. She passed away a little later.

“Then Pakeezah became a legend. Meena Kumari was so ill that she could not dance for the film. But I cherish my songs for her in that film.”

Meena Kumari was too frail to even stand straight for the climactic song and dance in Pakeezah, Aaj Hum Apne Duawon Ka Asar Dekhenge.

Kamal Amrohi had to get Padma Khanna to dance for Meena Kumari.

Meena Kumari had injured the little finger of her left hand in a car accident early in life.

In all her films, she kept her left hand covered with her sari or a dupatta.

Directors would tell her to not hide the finger as it took nothing away from her beauty and screen presence. But she remained self-conscious about her injury till the last. 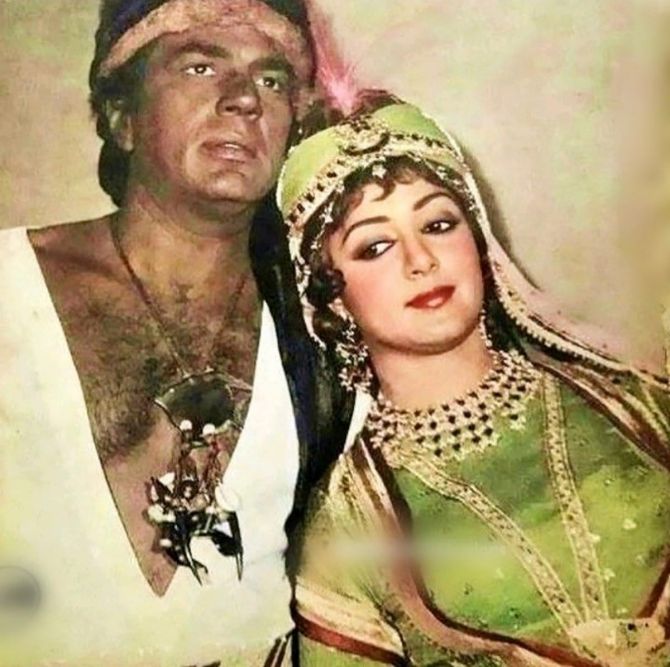 Meena Kumari was rumoured to have shared intense romantic relationships with Gulzar and Dharmendra, though neither men has ever spoken it.

She agreed to do Gulzar’s Mere Apne for almost no fee.

As for Dharmendra, probable proof of Meenaji‘s relationship lies in her husband Kamal Amrohi’s film Razia Sultan where he cast Dharmendra and then painted him black from head to toe on screen. It is said this was Amrohi’s revenge on the man who snatched his wife’s affections.

A formidable actress and a big box office draw, she insisted that producers who wanted her for their films sign Dharmendra opposite her.

Some of the films that she did only to boost Dharmendra’s career were Chandan Ka Palna, Main Bhi Ladki Hoon, Baharon Ki Manzil and Purnima. 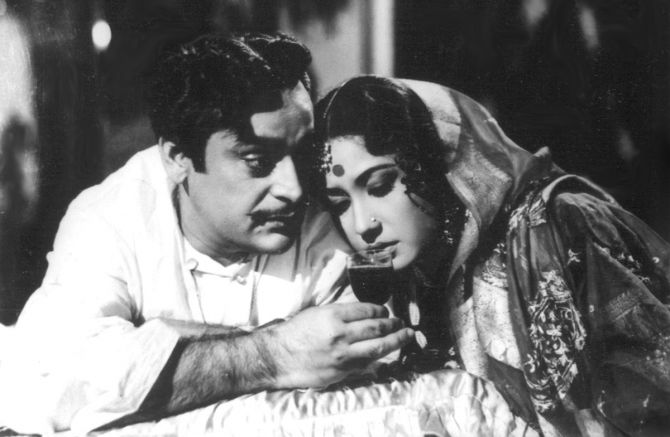 Meena Kumari’s most celebrated film is Pakeezah, but her finest film and performance was in Guru Dutt’s production, Sahib, Biwi Aur Ghulam.

She played the neglected alcoholic wife of a feudal family. The role was first offered to famous photographer Jitendra Arya’s wife Chhaya.

Meena Kumari had missed the opportunity to play a Bengali woman in Devdas and had her heart set on the role of Choti Malkin in Sahib Bibi Aur Ghulam.

Kamal Amrohi asked for a price for his wife that Guru Dutt could not afford. Meenaji personally intervened to sort out the matter. 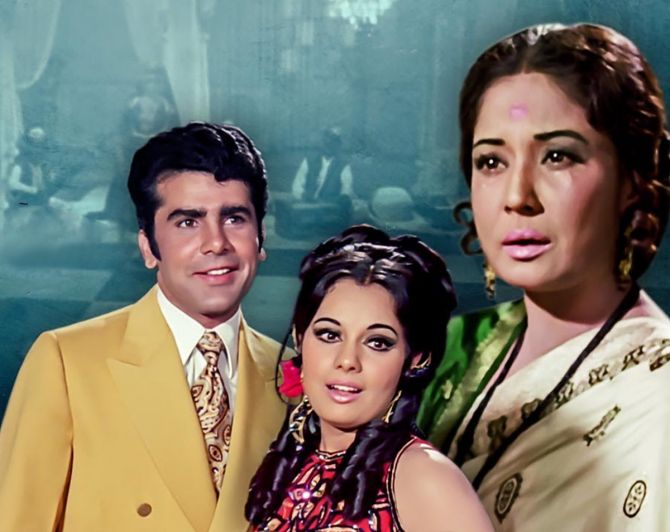 Contrary to belief, Meena Kumari’s farewell film was not Pakeezah, but Sawan Kumar Tak’s Gomti Ke Kinare, where she played a tawaif again.

She shot the film through her failing health as a favour to the debutant director. 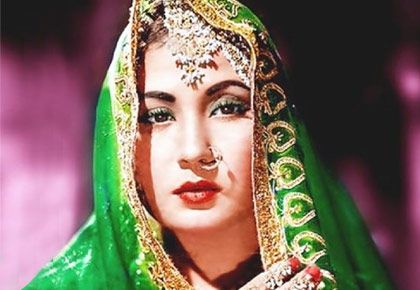