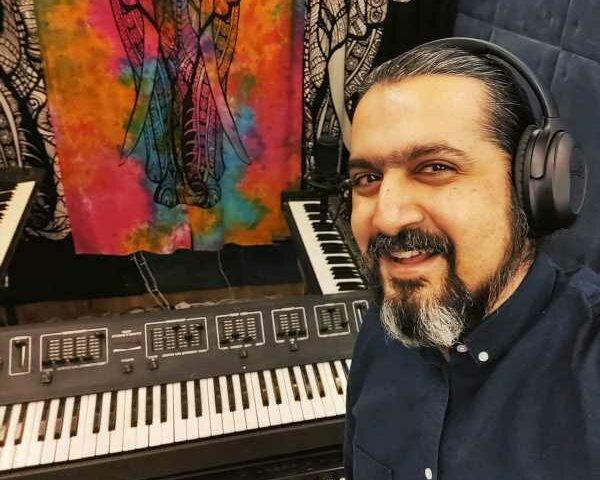 ‘Now, no one can stop me from making music till the day I die.’

With two Grammys in the Best New Age Album category — for Winds of Samsara in 2015 and Divine Tides this year with the former drummer for The Police Stewart Copeland — Ricky Kej should have been floating on air.

But he remains firmly grounded.

Even though it’s just 9 am, he is all vim and vigor as he speaks long-distance from Bengaluru to Rediff.com Senior Contributor, Roshmila Bhattacharya, saying, “Purely as a musician, if there is one parameter for success, this would be it. (Laughs) Maybe as I grow older, the music will go downhill, but that’s okay, as long as I can continue making it.”

Five years from now, when you look back on your second Grammy win, what will you remember of the evening?

The moment that will always remain engraved in my head is when they call out your name.

Back in 2015, my first thought was: Now, no one can stop me from making music till the day I die.

Purely as a musician, if there is one parameter for success, this would be it.

(Laughs) Maybe as I grow older, the music will go downhill, but that’s okay, as long as I can continue making it. What were you thinking the second time?

This time it was more emotional and there was only gratitude for those who have collaborated with me, made me who I am.

Would you believe that I didn’t even have a speech ready?

No, a couple of days before the ceremony, we were told that if there were two winners, only one could speak and no longer than 45 seconds.

If you went beyond or if the second winner took the mike, the conductor of the orchestra would increase the volume of the music to drown out your voice before they switched off the mike.

I was disappointed and told Stewart (Copeland) he should be the one to speak if we won because people would expect it.

He was hesitant, but finally agreed and on the day of the awards, when I reminded him, he assured me he had his speech worked out.

When we were on stage together, I touched his feet as a mark of respect and Stewart took the mike, made a joke, then handed it back to me, saying, ‘This album is all about Ricky Kej, so let him speak about it.’

He then turned and glared at the orchestra, warning them not to drown me out.

Only Stewart can get away with something like this because he is such a legend.

And because he is such a legend, he can be so generous, making my day by sharing the spotlight with me.

But as I said, I had no speech since I was unprepared so I thanked a few people and spoke about how the album is about co-existence.

Happily, it went viral with a couple of million views on YouTube. On April 15, you posted two pictures with Prime Minister Modi, the first after your win in 2015, the second, after the second Grammy.
Describing them as a ‘seven year challenge’, you pointed out that while he looked exactly the same, you had aged a lot and wondered what the PM’s secret is. What exactly transpired during these two meetings?

When I was invited by the PMO after the first Grammy win, I was told the meeting would be a maximum of five-ten minutes. It turned into almost an hour-long discussion on environment and climate change.

The PM was to address the plenary session at the COP 21 Summit in Paris soon after and he told me a little about what he was going to say.

He then suggested I make an album which he could launch at the climate change conference and I made Shanti Samsara with 500 musicians from 40 countries.

But what made the meeting life-changing was that back then, I was doing a lot of commercial music for TV and radio, and seeing how passionate I was about the environment, the PM advised me to dedicate my life to making only this kind of music.

I took his advice seriously and embarked on a new journey to make music geared towards creating a positive social impact.

After that, I have performed before the PM multiple times, including on the World Environment Day in 2018 when India was the global host and in Johannesburg before his speech to the Indian Diaspora.

What happened at the second meeting with the PM?

That was shorter, with me updating the PM on all that had happened in the last seven years and him, excited and proud, motivating me to continue along the same path and assuring me that he would support me in whatever I did.

Back in my hotel room, looking at the pictures, I was astonished to find that while he looked exactly the same, I had changed considerably and posted the tweet which caught people’s fancy.

When you win a prestigious award like the Grammy, it can bring vanity, which I don’t subscribe to, or you can use the platform for social good.

I would like to believe that I have been able to create awareness about environmental issues as a UN Goodwill Ambassador. Actor, production designer and author Janki Das who worked in over 1,000 films between 1930s and 1997 was your maternal grandfather. Did he influence you too?

I was very close to him till the day he died.

He was a huge influence.

What set him apart was that he had to excel in whatever he did.

When he was a cyclist, he was at the top of his game.

He broke world records between 1934 and 1942, went to the Berlin Olympics in 1936, and was the sole Indian representative at the British Empire Games in 1938.

He hoisted the Indian National Congress flag that Mahatma Gandhi had given him at the World Sports Congress in Zurich before the ceremony saying he could become the first Indian to hoist an Indian flag on foreign soil.

He did, was arrested and deported, and became a freedom fighter.

When he got into the film industry, he acted with Madhubala in her first film in the lead, the Sohrab Modi-directed Daulat.

He introduced Mala Sinha to Hindi films and entered the Limca Book for acting in the maximum number of films.

You must have got plenty of offers to compose for Bollywood and Hollywood films after the two Grammys. Will you follow in your grandfather’s footsteps?

Ramesh Aravind, who played the lead and directed the first two films, is a respected actor-filmmaker and a dear friend.

The soundtracks were very successful, but I did not want to carry on.

I gave music for a natural history documentary, Wild Karnataka, just before the pandemic.

It’s on the state’s rich bio-diversity and narrated by Sir David Attenborough.

It premiered on March 3, 2019, in an open-air theatre in Bangalore, with a screening at the UN headquarters on the same day, and bagged two National Awards. So we won’t get to hear a Bollywood film scored by you despite the family connection?

When Van Gogh painted, he did not tour the art galleries first to check out current trends. His art was an extension of his personality.

The problem with the film industry is that you are asked to compose either a love song or an item song and if I do this kind of music for money, these songs could end up becoming more popular than my own.

I would rather be less known for songs that define me than for those that don’t.

If I do a film, it won’t be a masala movie, but one that can bring about social change and is made by a film-maker with the best of intentions and not for commerce.

I would much rather do a documentary like Who Is Baul, the mystic musicians of Bengal.

It’s a 1,000-year tradition that is slowly dying because the songs which have passed down generations have no written texts.

With two film-maker friends, I travelled across Bengal, searching for the original sanyasi Bauls and recording them.

They were difficult to trace because they have no homes, live on alms and look for God through their voices.

Filming took us four years and we finished the post-production during the pandemic.

The documentary had a successful release on MUBI and can now be watched for free on YouTube.

You have been quoted as saying you want to collaborate with The Lion King composer Hans Zimmer and Pharrell Williams, who has scored the Despicable Me series.

Yes, I admire both.

Pharrell Williams is a multi-instrumentalist who has done pop, hip hop, rap, movie soundtracks and so much more.

I’ve seen him at parties and he comes across as very down-to-earth, with no airs, so I’d really like to collaborate with him.

Hans Zimmer is like a chameleon who adapts to any musical form.

In every film that he has done, be it The Lion King, Gladiator, The Last Samurai, Pirates of the Caribbean, The Dark Knight trilogy, the Christopher Nolan films (Inception, Interstellar and Dunkirk) or the more recent Dune, which bagged him his second Oscar, music has played an important role. And every single piece is epic!

We have met on three occasions and collaborating with him would be a learning experience. Another Indian origin singer, Falu Shah, also won a Grammy this year for Best Children’s album for A Colourful World.

Yes, I have spoken to Falu a few times, but not since the Grammy win. She lives in New York.

You’ve done some work for children too, including composing some new-age nursery rhymes.

The United Nations has 17 sustainable development goals that need to be achieved by 2030 by all 190-odd member states.

They touch on complex ideas like zero hunger, zero poverty, education for all and climate action.

With two friends, Dominic D’cruz and Lonnie Park, I wrote 27 earth songs on these goals which were fun, positive, energetic and easy to memorise for children.

The idea was to create a conversation on sustainability and environment at an early age.

They have currently been incorporated in 11 million textbooks across India.

Next to the lyrics, there are QR codes which when parents and teachers scan, can give the child access to them.

They are available in the public domain for free and can be used for any purpose with no copyright issues.

And since the narrative on the environment is constantly changing, we replaced three songs last year with new ones and will replace two more this year.

This is such an innovative project.

(Laughs) Yes, and the feedback from 40 schools has been fantastic!

We were told that after learning the song on plastic, kids shamed adults into action by thumbing down single use plastic in schools.

After translating them in Kannada, Tamil and Hindi, we have just completed the Spanish versions so they can go out to Spanish speaking countries.

I want to spread these songs across the world.