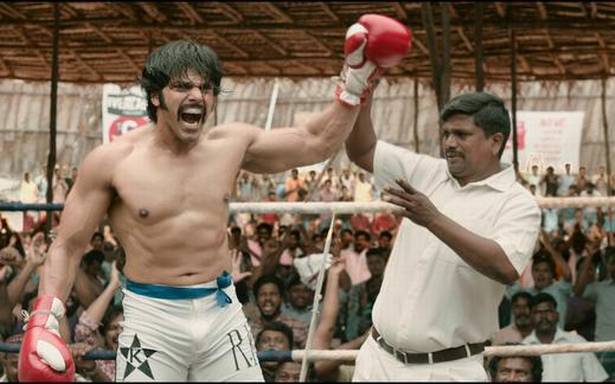 Pa. Ranjith has shown that real political history can provide a rich canvas for an entertaining film

Sarpatta Parambarai (The Sarpatta Clan), touted as one of the most intense sports dramas to emerge from India, is Director Pa. Ranjith’s fifth film. Sarpatta’s story has been brewing within him from the days of his debut film Attakathi. Like the rest of Ranjith’s oeuvre, Sarpatta is set within a conscious framework of historicity, political contestations, and ideological assertion. In the opening credits, the film pays affectionate homage to the boxers and coaches from Black Town in north Madras, and to the numerous contractors, commentators, and working-class audiences who contributed to the flourishing of the boxing culture there in the 1970s.

North Madras had a very rich heritage of boxing traditions initially inherited from the British, later carried forward by dedicated indigenous boxing clans. Ranjith, through his meticulous scripting of that boxing culture, has ingeniously brought the social history of those marginalised communities into the limelight.

The feuding among the boxing clans of Black Town, both in and out of the ring, constitutes the crux of Sarpatta’s story, but the sporting rivalry unfolds against a vivid political backdrop, depicting the imposition of the 1975-77 Emergency. The milieu of Black Town in the 70s — home to the protagonist, Kabilan — is brilliantly reconstructed and becomes a signifier for urban ghettos with predominantly Dalit population.

In Tamil Nadu, politics and cinema have a long and intertwined history. The Dravidian movement has used cinema to communicate its ideals from inception. The Dravida Munnetra Kazhagam (DMK) employed drama and cinema to break the hegemony of Congress propaganda and build a counter-narrative, with party leaders C.N. Annadurai and Muthuvel Karunanidhi writing numerous screenplays that attacked the inegalitarian status quo and boosted the Dravidian ideal, even as M.G. Ramachandran (MGR) built up his screen persona as the saviour of the poor and the weak.

In Sarpatta, Rangan, the head coach of the Sarpatta Parambarai and a legendary boxer of his times, is shown as a member of the DMK, the ruling party of Tamil Nadu in the 1970s. In the opening shot, he wears a dhoti with red-and-black trim, the DMK’s colours. In addition, framed portraits of Periyar, Anna and Karunanidhi adorn the walls of his home and training centre. Possibly the most obvious symbolism is the rising sun printed on the robes of the Sarpatta clan boxers in the initial bouts.

Rangan makes a speech in a public square, explaining the Emergency and referring to ‘our leader’, obviously the then chief minister of Tamil Nadu, Karunanidhi: “The prime minister’s autocratic rule is degrading the essence of democracy. Tamil Nadu is in safe hands under the protection of our leader,” he declares in the speech.

In another scene, a senior DMK member says it is their leader’s courage that has made possible the conduct of a boxing contest even during the Emergency. Sarpatta thus becomes a showcase for the resilience of the Dravidian government against pressure from Delhi, with Tamil Nadu shown as ‘an island of democracy’ for seven months. In July 1975, Karunanidhi addressed a one-lakh-strong audience, condemning Delhi’s dictatorship. For such defiance, his government was dismissed on January 31, 1976.

While several Tamil films have used the tired trope of the corrupt politician, only a few have aspired to a nuanced engagement with the political milieu. On that count, Sarpatta has shown that real political history can provide a rich canvas for an entertaining film. It brings to life how the Emergency became both a heroic and tragic moment for the DMK. The film’s recounting of the dismissal of a democratically elected State government and the imposition of President’s Rule gains significance at a time when the usage of ‘Union’ vs ‘Centre’ is being hotly debated.

Most importantly, Sarpatta is not all praise for Dravidian politics. While it shows Dalit participation in the Dravidian movement, it touches upon how the hierarchies of caste penetrate into emancipatory politics as well. When Rangan vathiyar (coach) asks why only a handful of party members are present to greet him when he is released from prison, he is told that most of them have gone to receive ‘Mudaliyar’, the last name indicating a higher-caste member. Rangan’s reaction captures his disillusionment. It’s a moment that underlines the complexly layered nature of casteism, which duplicates itself even in a movement that vows to fight against it. Moreover, the social decadence portrayed in the film is made to subtly correspond with the political ascendancy of MGR and his party.

In his debut film Attakathi, Ranjith demonstrated his deft handling of complex social realities. In Tamil cinema, the imagery of the omnipotent hero, who wins over all circumstances by sheer will and superhuman actions, has been pervasive. But in Attakathi, the protagonist navigates a world that does not bend as per his desires or ambitions. Rather, myriad social forces co-author the arc of the protagonist’s life. By accommodating broader social forces, Pa Ranjith masterfully integrates his politics and aesthetics into his filmmaking. This approach isn’t entirely new to Tamil cinema; Karunanidhi’s masterpiece Parasakthi (1952) foregrounds such an approach, where the protagonist is pushed and pulled by the currents of his times.

Sarpatta, too, is not a story only of Kabilan’s success, but reveals an underbelly where for every Kabilan, thousands of others are pushed out by discrimination or forced into criminality. By exposing these structural faultlines, the film shows how even an innately good-natured man can be pushed into violence and crime.

The beauty of Sarpatta is that it provides a glimpse of Tamil political history in all its storied and complex richness. It begins with the fight against Emergency, the participation of Dalits in the Dravidian movement, and Dravidian parties adjusting themselves to the caste status quo, and ends by showing the seed planted for the emergence of autonomous Dalit politics, as signaled by the blue robe donned by Kabilan in the final bout.

The legacy of the Dravidian movement in deploying cinema to advance an emancipatory brand of politics is being taken forward by the cultural renaissance initiated by Pa Ranjith. In the climax, Kabilan’s clan-mate-turned-rival Raman tells him, “Your victory is undeniable.” We might say the same for Pa Ranjith.

The writer is co-editor with Kancha Ilaiah of The Shudras: Vision for a New Path (Penguin, 2021), and is pursuing his Ph.D. at the Centre for Political Studies, JNU, New Delhi.