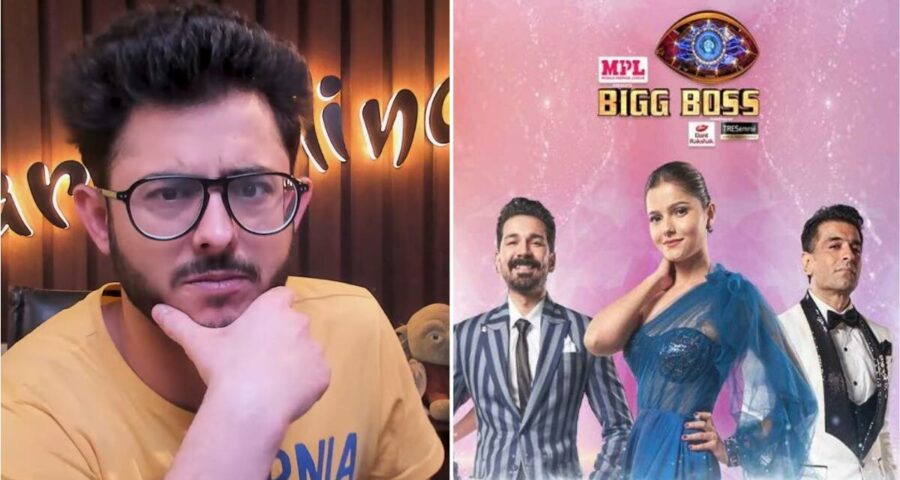 CarryMinati has uploaded a new video dissing Salman Khan and his Colors reality show Bigg Boss. The video also offers commentary on the ugly side of the internet.

The video opens with CarryMinati finding an objectionable video with his face. While the YouTuber hires an agency to salvage the crisis, he also ends up getting trolled by a bunch of young content creators. And soon enters a Salman Khan-inspired animated figure wearing the trademark blue bracelet and speaking with too many pauses. He also makes some silly jokes like “linein yaad nahi, maari jaati hai”. The character, who leaves from the ‘I love Sohail and Arbaaz club’, also ends up getting involved in a car crash. Ahem ahem!

Out of nowhere, CarryMinati starts talking about Bigg Boss. He shares that he could have done the show, but his ambition in life isn’t to be in a Tony Kakkar video. This is a dig at Bigg Boss contestants appearing in music videos.

He goes on to diss the show’s contestants, starting with Eijaz Khan and Jaan Kumar Sanu. While Khan and his unsuccessful strategies in the game are mocked, Jaan’s love story with Nikki Tamboli is also highlighted by the popular YouTuber.

CarryMinati then focuses on Rahul Vaidya and calls him a backbencher who doesn’t even want to perform tasks. He further makes fun of Vaidya’s decision to quit the show, and then coming back. Jasmin Bhasin is criticised for her aggressive fight with Rahul and even tagged as Jas-mean by CarryMinati. Her habit of crying at the drop of a hat also gets a mention.

Rakhi Sawant, who was one of the most popular contestants in season 1 and a wild card last season, is also not spared. Criticised for her behaviour on the show, CarryMinati also gave a special mention to winner Rubina Dilaik. Both these women and their various monologues are decoded by the YouTuber. And towards the end, he gets back to saying how it’s time for all these popular faces to feature in Kakkar siblings’ music videos. As readers would remember, while Abhinav Shukla-Rubina Dilaik worked with Neha Kakkar, Jasmin Bhasin-Aly Goni featured in Tony Kakkar’s music video.

While the video is quite unsavoury for the ‘aam janta’, CarryMinati’s fans would enjoy him dissing Bigg Boss.