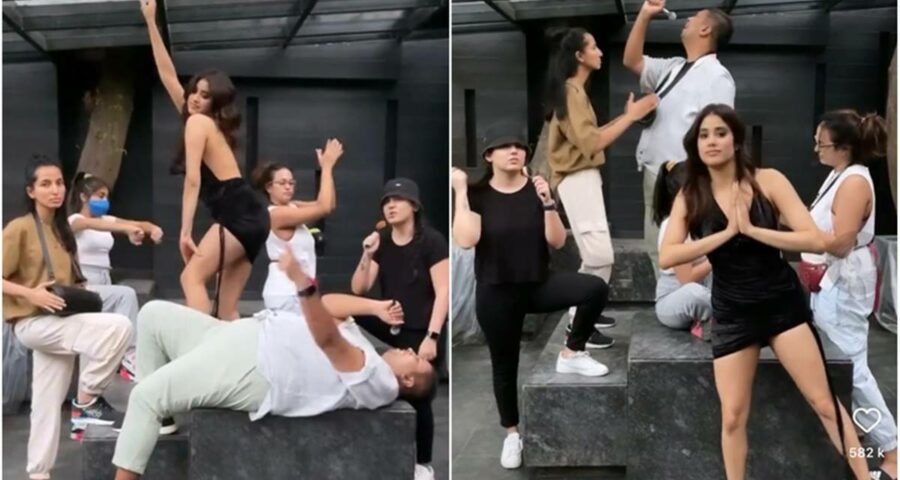 After giving a sneak-peek into her different moods via Instagram reels, Janhvi Kapoor treated her fans to a fun video in which she is seen dancing her heart out with her gang. Janhvi shared the video with a caption that read, “Aksa gang is back.” She, along with her gang, performed on Sean Paul’s ‘Temperature.’

The video shows Janhvi at her most candid, performing moves that she seems to be enjoying way too much. While her fans found the video cute and funny, Arjun Kapoor said it needs to be discussed over dinner.

“This needs a separate whole dinner to discuss,” he commented. Sanjay Kapoor wrote, “Awesome” while Maheep Kapoor loved the video. Masaba Gupta expressed she is “dying.” Namrata Purohit, Janhvi’s friend and her Pilate trainer, loved the video but was sad that she missed the fun. Replying to Namrata, Janhvi wrote, “You should have come.”

Janhvi dropped the video a week after her beach photos, which went viral on social media. In the photos, Janhvi was seen enjoying sunset at the beach with her friends.

“Maybe half the beauty of every blurred sunset is that it is fleeting,” she captioned the post. On the work front, Janhvi has a couple of interesting projects to her credit. The actor, who started off her 2021 with Roohi, has Goodluck Jerry and Dostana 2. While she has wrapped the shoot of Goodluck Jerry, she is yet to complete the shoot of Dostana 2.