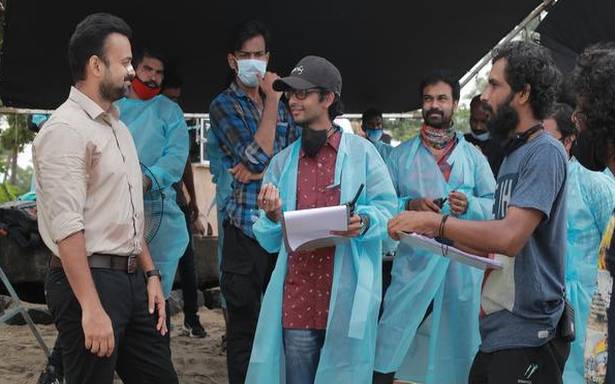 Appu N Bhattathiri is living his dream when Nizhal (shadow) reaches cinemas today. A State award-winning editor, Appu and script writer S Sanjeev had been working and talking cinema, scripts and themes till it all fell in place during the lockdown.

“That was when I was able to concentrate on my film and take it ahead as all editing work came to a temporary stop once I had finished the work on Maniyarayile Ashokan and Anugraheethan Antony, “ says Appu. Even while Anugraheethan Antony is playing in theatres, Appu directorial venture has also released. Rare distinction indeed for the 31-year-old cinemaphile.

Appu says Nizhal, starring Kunchacko Boban and Nayanthara, is about the events that unfold in a particular phase in judicial magistrate John Baby’s life, Kunchacko’s character, when he hears about a child, Nithin, and happens to meet him. Intrigued by the boy’s stories, John starts delving into them and from that moment onwards, his life changes significantly. Nayanthara plays the child’s mother.

“It was Fellini, one of the five producers of Nizhal, who suggested Chackochan’s name (Kunchacko Boban). He enjoyed the script and the narrative and agreed to play the character. Then the problem was to find the right actor to play the seven-year-old. The characters of the child and the mother move the narrative forward. So, we needed an actor who had that heft,” says Appu.

Kunchacko suggested Nayanthara’s name and though they wondered if she would agree, she liked the script and the movie began rolling in Kochi in October 2020 in adherence to COVID protocol. Nayanthara returns to Malayalam film after a break; Kunchacko and Nayanthara are acting together for the first time.

The film was announced and shot during the lockdown and exit lockdown stages. The director says that the circumstances, though challenging, proved fortuitous for the team because many scenes were conceptualised indoors. “We did not have to change the script and it was smooth going with cinematographer Deepak D Menon behind the camera. There are scenes outdoors but many important scenes of the intense thriller were visualised indoors. It is a conversation-driven film in some ways,” says Appu.

Most of the film was shot in Kochi with certain scenes canned in Bengaluru and Hogenakkal.

He says one of the breaks he got was in the form of child actor Izin Hash, a pro who has acted in several ad films. “It is true that working with children can be challenging and all the more so for a newcomer. Izin astonished all of us with his confident act. His ability to grasp and emote is truly commendable. Although he does not read Malayalam, he was able to reel off the dialogues without any difficulty once he faced the camera. Since the film hinges on the child, it was a relief to have an actor like Izin working with us,” says Appu.

Since his tryst with feature filmmaking began with director Jayaraj’s Of the People during his Plus Two days, Appu has travelled a long way in cinema. He had met Srinath Rajendran during the filming of Jayaraj’s film and worked as assistant editor in Srinath’s debut film, Second Show.

During that time Appu, an undergrad in digital communication in Chennai, was sought after by his school mates and friends who were making short films. He evolved into a trustworthy editor who could be entrusted with fine-tuning the narrative of the film. Appu has shaped some of the much-talked about films such as Oralppokkam, Kunjiramayanam, Lily, Udalazham, Theevandi… He won the Kerala State film award for the best editor (2017) for his work in Jayaraj’s Veeram and Rahul Riji Nair’s Ottamuri Velicham.

Nizhal is being edited by Appu and his friend Arunlal SP. Sooraj S Kurup is the music director.

And has that extensive work as an editor helped him to make the move to the director’s chair? “Yes, and no. Direction is exciting but it is also filled with stress. I intend to be choosy while stepping into the director’s shoes,” says Appu.