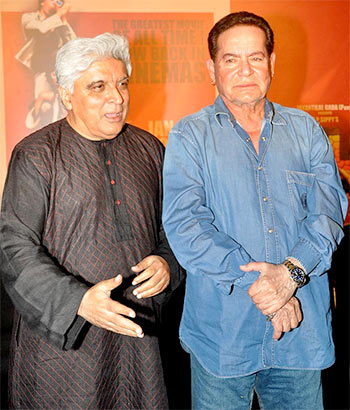 In much of the 1970s, Salim Khan and Javed Akhtar revolutionised the way the film industry looked at screenwriting and screenwriters with their stream of phenomenal hits — Zanjeer, Deewaar, Sholay, Don, Trishul, Shakti and Mr India.

Salim-Javed re-wrote the entire profile of screenwriters with their uninterrupted run at the box office. And now Javed Akhtar’s son Farhan Akhtar and the latter’s partner Ritesh Sidhwani of Excel Entertainment are all set to produce a documentary-drama on the Salim-Javed phenomenon.

A source very close to the development informs Subhash K Jha, “It will contain extensive interviews with Javed and Salimsaab and also with Amitabh Bachchan whose career was spectacularly amplified by the films that Salim-Javed wrote for him. It will also have extensive footage from the phenomenal films that the duo wrote.”

There were rumours that Javedsaab‘s daughter Zoya Akhtar will direct the documentary. This is untrue.

“We are on the verge of finalising the director,” says the source. “It will be someone new.”