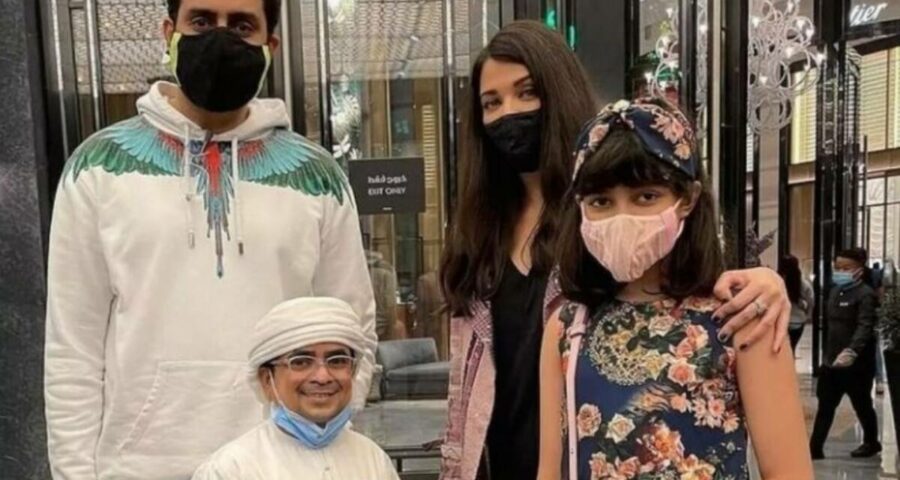 Abhishek Bachchan, Aaradhya and Aishwarya Rai Bachchan had made a visit to Dubai earlier this month after Aishwarya walked the ramp for a cosmetics brand at the Paris Fashion Week. Fan clubs of Bollywood’s power couple Abhishek Bachchan and Aishwarya Rai Bachchan shared a photo of them with a fan. The photo, it appears, is from their time in the UAE this month and also features their daughter Aaradhya. Aaradhya is clad in a floral dress and a matching headband, while Aishwarya wore a black outfit underneath a pink coat. Abhishek’s hoodie had a bird design on it. All three of them had masks on.

The trio had made a visit to Dubai earlier this month after Aishwarya walked the ramp for a cosmetics brand at the Paris Fashion Week. During their time there, she had taken a photo of Abhishek at the sea, which he had shared on his Instagram account. “Sun, sand and sea! #dubai @ooroyalmirage,” he wrote, crediting Aishwarya as the photographer.

The couple has a busy year ahead of them. Abhishek has been filming Breathe: Into The Shadows, while Aishwarya has Mani Ratnam’s Ponniyin Selvan in the pipeline. Ponniyin Selvan marks Aishwarya’s fourth collaboration with Mani Ratnam, and it will be released in two parts. The actor-director duo has worked together in Iruvar, Guru and Raavanan.

Ponniyin Selvan is based on writer Kalki Krishnamurthy’s historical fiction novel of the same name. Set in the backdrop of Chola Dynasty, the novel has been adapted for the big screen by Ratnam along with writer B. Jeyamohan, who has penned dialogues for the movie.