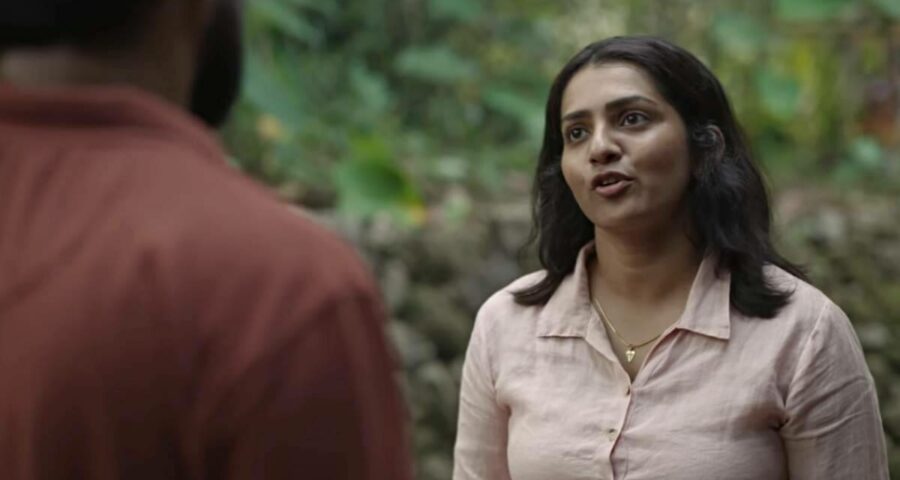 Aarkkariyam movie review: The film presents lives in disarray, looking for moorings and closure, in the most natural way in a most unnatural year where we all were forced to live in isolation. The beginning of the pandemic, in early 2020, already seems like a life-time ago. Aaakkariyam opens with a couple who live on the outskirts of Mumbai getting ready to drive down to Kerala. The two-day road trip is the only way to get from one place to another, and even this needs to be done fast, as crossing state borders may also soon become impossible.
Like millions of hapless people, the harsh lockdown has left Sherly (Parvathy Thiruvothu) and Roy (Sharafudheen) in a tight financial bind. The only way out is for them to head south, where Sherly’s father, 73-year-old Ittyavira (Biju Menon), and young daughter (Tejaswini), are eagerly waiting their arrival. The palpable sense of relief when they reach home is evident; you can see the tension leaching out of the exhausted couple. It even begins to look as if the resourceful Ittyavira may have a solution to their problems, and then, wham, a flying missile encapsulated in a throwaway remark strikes. And everything crumbles.

This, the delivery of the bombshell, is the most artful part of the film which knows how to incorporate artlessness in its telling. In his debut directorial, Varghese, who has been the cinematographer on such films as ‘Kartik Calling Kartik’, ‘Badhai Ho’, ‘Wazir’, ‘Android Kunjappan’ and ‘Take-Off’, among others, shows that he knows exactly how to recreate life on screen with such ease that you forget you’re watching stuff mediated by a camera.
What we get is a well-knit plot that gives up its secrets as it goes along. We learn why Sherly’s daughter is living away from her, and our assumption about Roy being the father is just that, an assumption. Sherly’s painful backstory threatens to come alive again, as Roy begins unravelling the dark secrets that lie buried. Can we ever fully escape our past? Can our faith save us from mortal sin?

I was completely engrossed in the film up until it begins telegraphing its punches. Once Roy has been let in on the secret, he’s shown constantly expressing a horrified fascination for a specific spot in the backyard. The repetition is not a good idea, because with each iteration, it loses its power. And the other thing which bothered me was the calmness with which a principal character confesses to a crime. How did it change him? Can there be a human who does not, in some deep fundamental way, get impacted by the taking of a life? We are never made privy to the inner life of this principal character. We are never shown any turmoil. And that takes away from the impact.

But still, this is a film which presents lives in disarray, looking for moorings, and some kind of closure, in the most natural way in a most unnatural year where we all were forced to live in isolation. It’s the kind of film where less is more: you see Sherly resting her head on a C-shaped airplane pillow which hangs by the car window, and you know that the people in the car are aware of the tiredness that comes with long drives. It’s a tiny detail, but it’s telling. Parvathy, her face devoid of make-up (this is what real people look like; not the no-make-up make up look that takes hours to get right) delivers a heartfelt performance, and both the men are fine, too. And the film leaves you thinking, can we ever know anyone completely? What lies underneath the most placid surface? Who, really, knows?