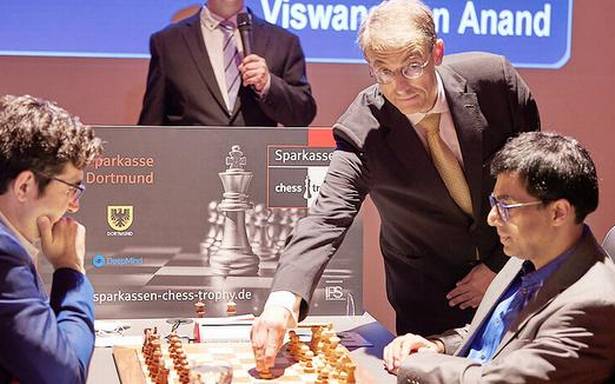 The last time Viswanathan Anand was in Germany, the world was slowly waking up to the reality of a pandemic. He was stuck there for three months before he could finally fly home to Chennai.

It was a pleasanter Germany he found when he landed in Dortmund last week for his No-Castling chess match for the Sparkassen Trophy with Vladmir Kramnik. He won the four-game event in convincing style.

The match was Kramnik’s idea. By doing away with castling — a single move by which you can take your king to safety even as making the rook more active — the Russian wanted to make the game less theoretical and predictable. If the chess played by the two former World champions is anything to go by, the new variant holds promise.

“I was surprised to find that the game was much richer and more complex than I realised while I was studying it before the match,” Anand told The Hindu over phone from Germany.

“Lots of things change with the king stuck in the centre. Many new plans come in. I would be interested in trying No-Castling more at some point of time.”

He said he was delighted to win the match, especially after defending correctly in the last game. “Considering the fact that Kramnik is the person who had been thinking more about the match, having come up with the idea, it certainly was a good result for me,” he said.

About all the four games being played from the English Opening, he said it was a good option with the king not knowing where it wanted to go.

“We stuck to the same opening because we had studied it and decided to build on that,” Anand said.

It was right after finishing runner-up at the strong Grand Chess Tour that he travelled to Dortmund. The 51-year-old said that the two excellent back-to-back shows motivated him to work harder.

“After a long break, I was apprehensive how it would be to return,” he said. “I am open to playing more chess now that travelling has become easier.”