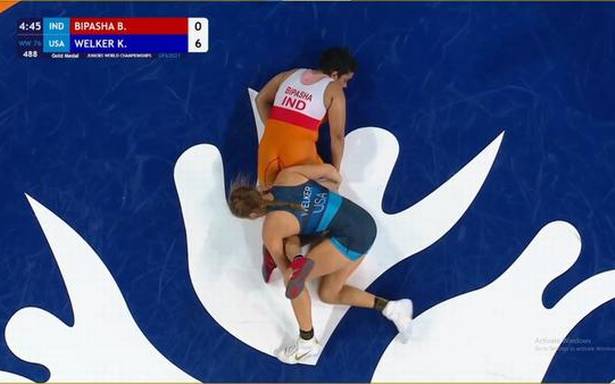 Bipasha got India another silver medal after she lost to Kylie Renee Welker of the USA in the women’s 76kg gold medal bout at the World junior wrestling championships on Thursday.

Bipasha was outclassed by Kylie 10-0 in a minute and 25 seconds.

Sanju Devi and Bhateri booked their berths in the final of the women’s 62kg and 65kg weight categories respectively.

Sanju defeated Luisa Scheel of Germany (5-2), Iva Geric of Croatia (4-3) and Birgul Soltanova of Azerbaijan (8-5) to set up a title clash with Russian Alina Kasabieva.

Bhateri beat Khadija Jlassi of Tunisia (2-1) and Amina Capezan of Romania (2-2, via criteria) to make the final where she will meet Irina Ringaci of Moldova.

In other bronze medal matches, Kusum (59kg) lost to Azerbaijani Zhala Aliyeva (3-1), while Arju (68kg) gave a walkover to Zsuzsanna Molnar of Belarus.

Saneh (72kg), who lost to American Kennedy Alexis Blades (11-0) in the semifinals, will fight for bronze.