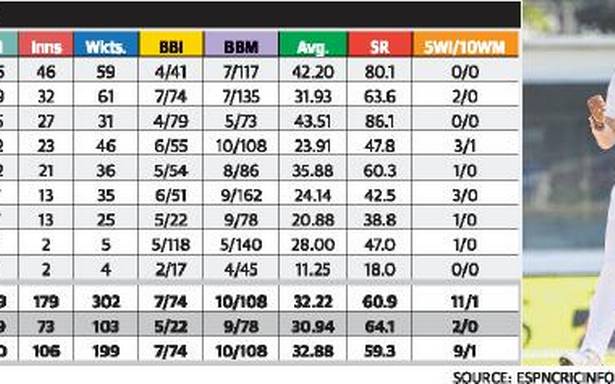 On the verge of playing his 100th Test, Ishant Sharma looks back at a storied career and lists his immediate goals

From a promising fast-bowler who bamboozled the great Ricky Ponting in Perth in 2008 to a seasoned campaigner whose short-ball ploy gave India a rare victory at Lord’s in 2014 to the leader of arguably the best pace attack in the world in 2020, Ishant Sharma has got better just like the fermented grape juice that gets better with age.

On the verge of becoming only the second India pacer to earn 100 Test caps, Ishant sat down for a virtual interaction from Ahmedabad ahead of the third Test against England and looked back on his career. Excerpts:

On reaching the milestone

When it comes to the 100th, I honestly feel it’s just a number. I never thought of playing 100 Test matches and once it happens, I won’t set a target in terms of games. I will play the 100th with the same feeling, intent, the same aggression that I played my 99th with. As long as it keeps reflecting in my bowling, I would love to keep representing India.

On how he treats exclusion from the limited-overs set-up

Generally I think of it as a blessing in disguise. Obviously I love to play white-ball cricket. But I don’t feel that had I been playing all three formats, I wouldn’t have played 100 Tests.

I am just 32, not 42 years old. Had I been playing white-ball cricket, maybe it wouldn’t have happened so early but I am sure with the longevity I have and the kind of effort put in on my body to remain fit, it wouldn’t have been a problem for me.

On his immediate goals

I have just one format to play, so [World] Test Championship is like the World Cup for me. If we can make it to the final and go on to win it, for me, it would be the same feeling as winning the World Cup or the Champions Trophy.

On his memories from his debut Test in Dhaka in 2007

Luckily Ravi [Shastri] sir was the cricket manager then and now he is the coach in my 100th. I was obviously nervous, with a noisy crowd at the stadium, but he told me: