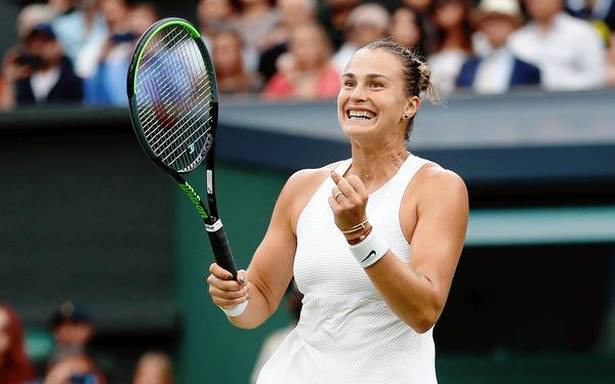 The Belarusian’s power too much to handle for the Tunisian; Czech cruises past Golubic; Barty takes on Kerber in the other semifinal

Aryna Sabalenka ended Ons Jabeur’s historic run at Wimbledon on Tuesday, the second-seeded Belarus player’s power getting the better of the guile of the Tunisian. Sabalenka won 6-4, 6-3 in 74 minutes.

The 23-year-old, who had only won one match on her three previous visits to SW19, will play former World No. 1 Karolina Pliskova who eased into the last four with a straight sets win over Viktorija Golubic. Jabeur lost for the second time in a Grand Slam quarterfinal.

Sabalenka may sport a tiger tattoo — it prompted her parents not to speak to her for a week in 1998 — but the broadest of smiles spread across her face as she soaked up the reality of her achievement.

She will try and go one better than compatriot Victoria Azarenka who twice reached the last four in 2011 and 2012.

“I mean I am really happy with this win,” she said. “It’s always tough against Ons, she’s an amazing player and person. I’m happy it looks like everything is working for me.”

Sabalenka said she was anticipating a tough battle on Thursday against Pliskova.

“It doesn’t matter what happens in the past in tennis (playing Pliskova),” she said. “Pliskova’s a great player and she’s serving well. Her game fits really well on the grass and I’m going to do all I can to enjoy this one."

Pliskova’s tennis success revolves around her big serve, which rewards her with plenty of easy points and gets her out of trouble when needed. She claimed 24 of 26 points on her serve in one stretch, hit eight aces and saved the only three break chances she faced on the way to a 6-2, 6-2 victory over Viktorija Golubic.

“I feel like I’m improving with every match. Everything was working quite well today,” said Pliskova, the 2016 U.S. Open runner-up and a former No. 1. “I just feel my game has been good the last two weeks, even during training.”

Pliskova averaged 106.5 mph on her first serves, 20.5 mph faster than Golubic, with the retractable roof at No. 1 Court shut because of rain.

The crowd on the No. 1 Court — and Centre Court — was at full capacity on Tuesday for the first time during the tournament after COVID-19 restrictions placed a 50% cap on attendance when the fortnight began.

Former champion Angelique Kerber reached the Wimbledon semifinals for the fourth time with a 6-2, 6-3 win over Karolina Muchova of the Czech Republic.

In the day’s first match , No. 14 seed Hubert Hurkacz came back to beat No. 2 Daniil Medvedev 2-6, 7-6(2), 3-6, 6-3, 6-3 in the resumption of a fourth-round match suspended on another court Monday night. Hurkacz’s first Grand Slam quarterfinal will come against 20-time Major champion Roger Federer on Wednesday.

“Roger, what he does, the way he plays, the titles he has won — he has inspired so many people," said Hurkacz, a 24-year-old from Poland. “It’s going to be fun. I’ll be hoping to get a little bit of support.”

On Monday, Federer, who will be 40 in just under five weeks’ time, eased past Italy’s Lorenzo Sonego 7-5, 6-4, 6-2 to make the last-eight for the 18th time. “I felt after the first set I was able to control things. I couldn’t be more excited to be in the quarters,” said Federer.