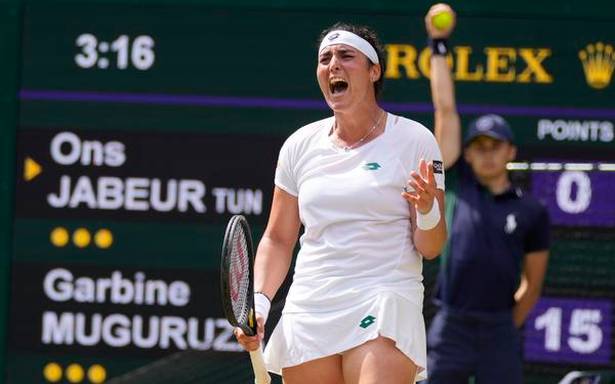 The 26-year-old was so nervous when she moved to two match points that she knelt down and was physically sick in the corner of Centre Court.

Muguruza saved one of those, but Jabeur made no mistake on the second, before falling on her back in celebration and getting back up to a standing ovation.

She will next meet Poland’s 2020 French Open champion Iga Swiatek, who was ruthless in her demolition of Romania’s Irina-Camelia Begu 6-1, 6-0.

It was another landmark performance by Jabeur, who only last month became the first Arab woman to win a WTA Tour title, triumphing on grass at Birmingham.

Jabeur, whose best Grand Slam finish is quarter-finals at the 2020 Australian Open, said she was nervous at the outset but gradually settled into a rhythm.

Muguruza had taken a tight first set but Jabeur worked her way back and by the third set, she clearly had the upper hand.

Muguruza’s serve was continually under pressure with Jabeur breaking her on her first service game of the deciding set.

The Spaniard saved several break points on her next service game but Jabeur broke again for 4-1. From then on, the Tunisian was never really under pressure save from herself, as she closed out the match.

On Thursday, Roger Federer became the oldest man to reach the third round at Wimbledon in 46 years, following a 7-6(1), 6-1, 6-4 victory over Frenchman Richard Gasquet.

Australia’s Ken Rosewall was 40 when he made the third round at the All-England Club in 1975.

After a tight first set, it was pretty much one-way traffic as Federer, 39, beat Gasquet for the 19th time in 21 meetings.

“I’m happy with my performance,” Federer said. A tough first set, I was happy with the second and I was better in the third.”

The Centre Court crowd may have split loyalties when he faces 25-year-old Cameron Norrie of Britain on Saturday. “Cam is a good guy and is having a wonderful year. He has done well here but it’s time for him to go out!”, Federer said with a laugh.