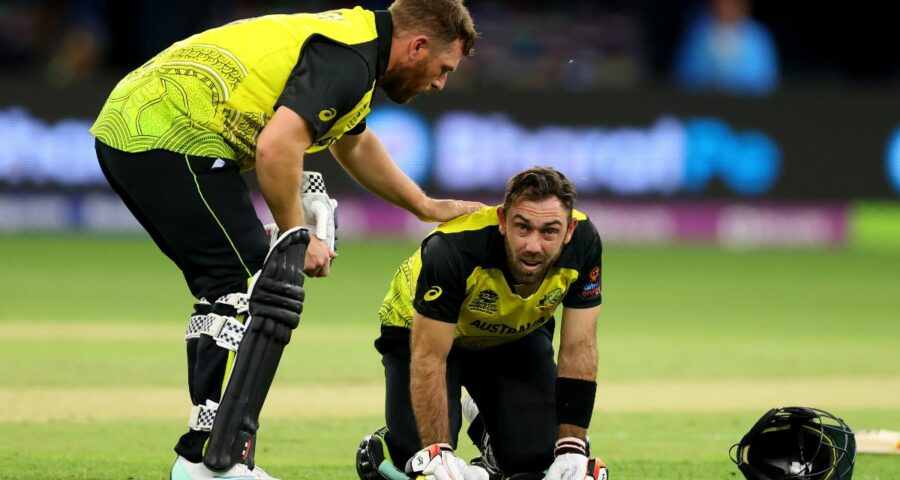 Once promising a clash of favourites, the Super 12 showdown between Australia and England at the Melbourne Cricket Ground on Friday now appears more of a desperate battle for survival for two humbled teams.

Australia, thrashed by New Zealand in their opener, have looked like a shadow of the side that triumphed in the United Arab Emirates last year, with captain Aaron Finch’s batting struggles topping concerns.

Finch’s tortured 31 not out from 42 balls in Tuesday’s win over Sri Lanka was widely mocked on social media as one of the most awkward knocks in World Cup history and did little to ease pressure on the seasoned skipper.

With Steve Smith unused thus far, former captain Allan Border called on selectors to drop Finch for the England match, a must-win for both teams.

“It doesn’t mean ‘Finchy’ doesn’t come back in. But what is our best side for England? I just reckon Smith has to be in there somewhere,” Border told News Corp media.

Finch bristled when asked to address Border’s comments, saying his slow knock was an anomaly and he was still 100% confident in his game.

“I don’t feel any more pressure than I ever have, the only pressure is the expectation you put on yourself,” he told reporters on Thursday.

Australia also have other concerns, with test captain and fast bowler Pat Cummins under rare scrutiny, after a poor start to the tournament.

Matthew Wade, the only specialist wicketkeeper in the squad, has tested positive for COVID-19, the team confirmed on Thursday, but could still play.

Whether England have the means to exploit Australia’s vulnerable position is no certainty following their morale-sapping defeat to Ireland at the MCG, on Wednesday.

Barring a fiery 3-34 from express paceman Mark Wood and solid death bowling, Jos Buttler’s side were mostly poor in the field and their batsmen were culpable for a slow run-rate before the rain and the Duckworth-Lewis method sealed their fate.

England coach Matthew Mott said the players know exactly what is at stake.

“We’re playing against the host, the defending champions, so there’s no need for us as a coaching group to motivate the group. They’ll play well and come out firing,” said the Australian.

England thrashed Australia in the Super 12’s in the UAE last year, leaving many to write off Finch’s team to then eat their words when they stormed to the title.

Both sides have ample quality to rebound but only one will emerge from the tournament intact if the forecasted rain abates long enough for a contest.

The clash of the Ashes foes headlines an MCG double-header which starts with another virtual knockout match between Ireland and Afghanistan.

Ireland, who eliminated West Indies during qualifying, hope to keep the good times rolling against the Afghans, another side with aspirations of being counted among the elite.

Ireland were brave against the English pace attack on a tricky MCG wicket but face a different challenge against the spin-heavy Afghans led by talisman Rashid Khan.

Comfortably beaten by England in their first Super 12 match, Afghanistan are chomping at the bit after their New Zealand game was washed out by Melbourne rain on Wednesday.

“The MCG will be ideal for our spinners. Yes, Ireland beat England, but we are ready to play good cricket,” said assistant coach Raees Ahmadzai.