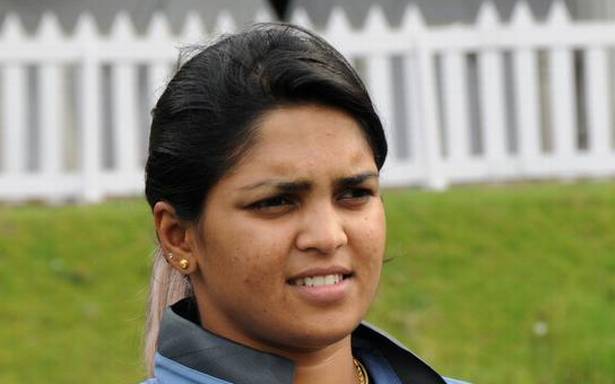 "Completely destroyed" after losing her mother and sister to COVID-19 recently, Indian women’s team cricketer Veda Krishnamurthy says she is slowly learning to tune herself out of that grief and stressed on the importance of mental health assistance in crisis situations.

Nine members of Krishnamurthy’s family battled the disease and her mother and sister passed away within two weeks of each other last month in Karnataka.

"I’m a big believer in what destiny holds for you, but I really hoped that my sister would come back home. When she didn’t, I was completely destroyed. All of us were broken to pieces," Krishnamurthy told ESPNcricinfo in a lengthy post detailing her trauma.

"…I still had to put up a brave face for the rest of the family. What I had to do in those testing couple of weeks was learn to tune myself out of my grief. But it keeps coming back to haunt you," she said.

The middle-order batter said she was the only one in the family not to contract the virus and ended up coordinating all the medical needs at that time. It was then that she realised how difficult it would have been for several other people to access basic care.

"Going through my Twitter feed at the time, I felt a lot of people were struggling with something as basic as getting a doctor to instruct them on what they should be doing – whether that was isolating at home or something else," she recalled.

Speaking about the mental aspect of dealing with a health crisis and the ensuing tragedy of such a magnitude, Krishnamurthy said her mother and sister also suffered from anxiety while battling the illness.

"Mental strength is important. My oldest sister, Vatsala, had panic attacks before she passed away from COVID," the 28-year-old said.

"My mom might also have panicked, because the night before she died of the virus, in my home town, Kadur, about 230 km north-west of Bangalore, she learned that everybody else in the family had tested positive, including the kids. I don’t know, but maybe that affected her," she said.

Krishnamurthy revealed that she has dealt with mental health issues of her own in the past and called for a structured support system for those in need.

"A lot of people who are playing cricket currently know what mental health is, but it is also important to accept that if the system is not doing anything to offer you mental-health assistance, you can and must find the support for yourself if you can afford it.

"I’ve had mental-health issues and I’ve sought support to resolve them myself."

Krishnamurthy, who has played 48 ODIs and 76 T20 Internationals, was excluded from the Indian squad for this month’s tour of England, where the team is scheduled to play one Test, three ODIs and as many Twenty20 matches.

The BCCI had drawn flak from several quarters for not keeping in touch with the bereaved player after which Krishnamurthy received a phone call from Board secretary Jay Shah.

"I’m not upset with people who didn’t call me or message me. I thank everyone who checked on me.

"I did get a call from the BCCI secretary, which I didn’t expect, to be honest. He said when he is in Bangalore, he will visit me," she said.