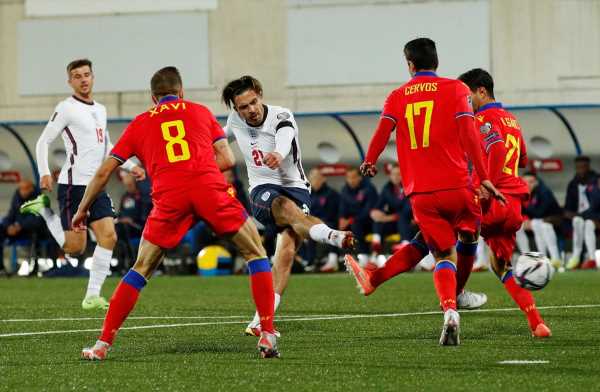 Jack Grealish came off the bench to score his first goal for England and complete a 5-0 rout of Andorra, on Saturday, which edged his side a step closer to sealing their place in next year’s World Cup finals.

Manchester City’s Grealish, who came on for his 16th cap in the 73rd minute, produced a trademark dribble and finish to round off a satisfactory night for England manager Gareth Southgate who rested most of his big guns.

Ben Chilwell began the scoring in Andorra’s tiny national stadium, also with his first England goal, and Bukayo Saka made it 2-0 shortly before the interval.

AS Roma’s Tammy Abraham, given a first start for four years, made it 3-0 with a tap-in and James Ward-Prowse then had a 79th-minute penalty saved before converting the rebound.

But the best was saved for last as Grealish dribbled around a tiring Andorra defence before slotting in a low shot.

“It has been a long time coming and it’s about time that I scored because everyone has been saying it to me,” Grealish said. “I’m just delighted that I’ve got off the mark.

“In the back of my mind there has been that feeling that I’ve just wanted to score, just to get off the mark. I’ve done that tonight, I’m delighted and it’s a night I won’t forget.”

In another mismatch, similar to England’s 4-0 win at Wembley last month, Andorra offered hard graft and defended robustly but were no match for Southgate’s much-changed side who eased to their sixth win from seven matches in the group.

England now have 19 points, four more than Albania, who won in Hungary, and five more than Poland. Two wins from their last three games, at home to Hungary and Albania and away to San Marino, will book their place in Qatar. Poland thrashed San Marino 5-0 in their Group I World Cup qualifier on Saturday as Paulo Sousa’s side remain one point behind second-placed Albania, who defeated Hungary in Budapest.

Sousa started the game with just two players from the starting line-up against England in September, resting players such as Piotr Zielinski, Kamil Glik and Grzegorz Krychowiak ahead of Tuesday’s crunch match against Albania.

Poland’s Karol Swiderski put the hosts ahead after ten minutes with a close-range header, followed by an own goal by San Marino ten minutes later, after defender Christian Brolli deflected a pass from Kacper Kozlowski.

The hosts increased their lead shortly after halftime when defender Tomasz Kedziora struck the ball into the roof of the net. Striker Adam Buksa scored in the 84th minute having grabbed a hat-trick against San Marino in September.

Krzysztof Piatek tapped the ball into the net in stoppage time in his first match since recovering from the injury that prevented him from playing at Euro 2020.

Poland travel to Albania on Tuesday in an attempt to reclaim second spot in the group. Serbia boosted their hopes of reaching the 2022 World Cup after a moment of individual skill from striker Dusan Vlahovic gave them a barely deserved 1-0 win at Luxembourg in a turgid Group A qualifier on Saturday.

The result lifted Serbia to the top of the group on 14 points from six games, one more than Portugal who have a game in hand. Luxembourg stayed third on six points from five games.

Serbia lacked pace and intensity for much of the contest as manager Dragan Stojkovic’s formation that included four forwards left a gaping hole in the centre of midfield, limiting the supply routes.

Anthony Moris blocked wing-back Filip Kostic’s close-range shot in the second minute and Serbia failed to trouble the home goalkeeper before Vlahovic broke the deadlock from out of the blue in the 68th minute.

The Fiorentina striker took a long ball from Milos Veljkovic into his stride with a classy first touch and beat Moris with a crisp shot inside the near post from 14 metres after cutting into the penalty area.

Vlahovic had a carbon copy goal ruled out for offside in stoppage time after a VAR check as the visitors missed several chances on the break to score a second.

In the group’s afternoon fixture, fourth-placed Ireland celebrated the first win of the campaign with a 3-0 away rout of bottom team Azerbaijan.

Serbia are at home to Azerbaijan and Portugal host Luxembourg in the next round of games on Tuesday. Armando Broja scored 10 minutes from time to hand Albania an upset 1-0 away victory over Hungary in Budapest on Saturday and keep up their hopes of an unlikely World Cup qualification.

The English-born Broja, who is on loan at Southampton from Chelsea, scored for a second successive Group I game against Hungary after also netting a dramatic late winner in last month’s 1-0 home success in Elbasan.

The game was played behind closed doors at the Puskas Arena after Hungary were fined and given a stadium ban after the racist abuse of England players in their World Cup qualifying clash last month.

The points kept Albania in second place in Group I, one ahead of Poland, who were 5-0 winners over San Marino, and four behind leaders England, who won easily at Andorra.

Albania, who used to be one of the whipping boys of European football, now have the opportunity of moving even closer to the minimum of a playoff berth in March if they beat Poland in their next match in Tirana on Tuesday. Steven Zuber and Christian Fassnacht both scored as Switzerland defeated 10-man Northern Ireland 2-0 in their World Cup Group C qualifier after the visitors had defender Jamal Lewis bizarrely sent-off in the first half for time-wasting.

Zuber produced a calm finish from the edge of the box just before the break when the pacey Breel Embolo broke forward and managed to squeeze the ball to the midfielder after skipping past two weak defensive challenges.

Denis Zakaria had an early goal ruled out for offside, while the home team also missed a host of second half chances before substitute Fassnacht finally added a second in stoppage time.

The win moves second-placed Switzerland to 11 points from five matches in the group, three behind leaders Italy with a game in hand. Northern Ireland stay in third with five points from as many games.

Switzerland had long been knocking on the door when left back Lewis received his marching orders on 37 minutes, a huge blow for the already stretched visitors.

He had earlier been booked for pulling back Embolo and was shown a second yellow by Slovenian referee Slavko Vincic for what was perceived to be delaying tactics at a throw-in.