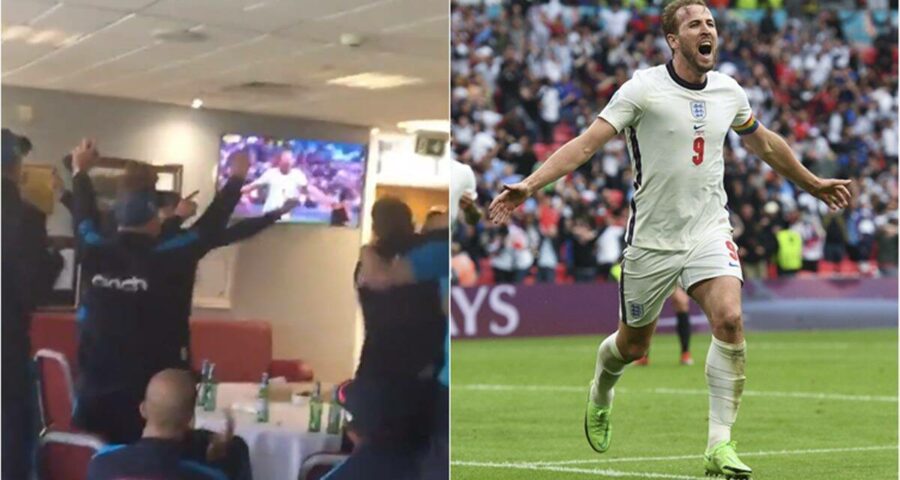 A video of Eoin Morgana & Co. celebrating the goal scored by Harry Kane was posted on the England Cricket Twitter account. England football team created history as they beat Germany by 2-0 in the round of 16 of the ongoing Euro 2020 at Wembley Stadium, London. The England cricket team also got a chance to watch the match together in the dressing room as they finished the first ODI against Sri Lanka early. A video of the team celebrating the goal scored by Harry Kane was posted on the England Cricket Twitter account.

The 2-0 scoreline against Germany also meant that the English finished the game within 90 minutes for the first time in the knockout matches of Euro.

Before Kane ensured victory with a pin-pointed header in the 86th minute from Jack Grealish’s cross, it was Raheem Sterling who broke the deadlock in the 75th minute to get England in front. England will play Ukraine in the quarter-final on July 4 in front of an Italian crowd.

Earlier, England finished the run chase against Sri Lanka before 10 PM IST. Despite losing four wickets in a space of 26 runs, veteran Joe Root ensured there was no anti-climax in the game with his unbeaten 79-run knock. The hosts chased down the target of 186 with 15.1 overs to spare. In the powerplay overs, it was opener Jonny Bairstow who got England off to a flier with his 21-ball 43.

After being put to bat first, Sri Lanka struggled as they lost three wickets for 46. In a team filled with all-rounders, opener and wicketkeeper-batsman Kusal Mendis scored an 81-ball 73. Wanidu Hasaranga also contributed with his knock of 54 sharing a 99-run partnership for the fourth wicket with Mendis. However, eight of Sri Lanka’s batsmen failed to score in double digits as visitors were bundled out for 185 in 42.3 overs.