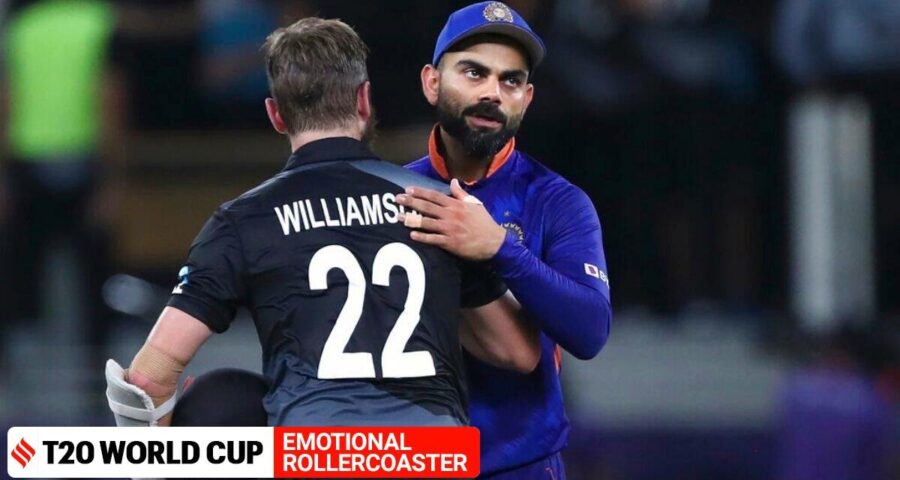 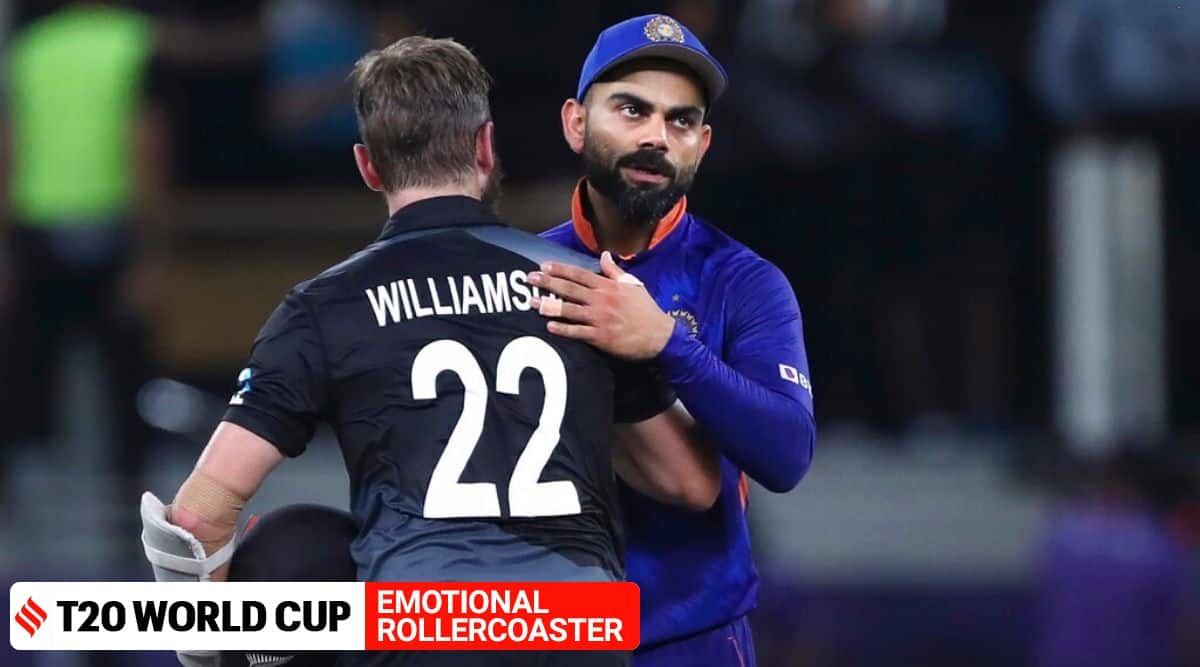 Not long after Kane Williamson hit the winning run, Virat Kohli lifted his cap, scratched his head and ruffled his hair. The face was grim. The expression that was ever present through the evening – when he sat in the dug-out after he had been dismissed, when he watched the wheels come off India’s batting, and now at the end of the game. On the field, a short while before the end, he failed to collect a throw at non-striker’s end and the ball rammed into his knee. He hobbled away to his fielding position in pain. It was that kind of night: nothing he tried had come off. The rejigged batting order hadn’t come off. It would have been one thing had they tried to hit and got out but it was a strange meandering of sorts. To borrow Kohli-speak, the intent wasn’t visible, they weren’t “brave enough”. There were 54 dot balls; nine overs of nothingness in a T20 over, surely that wouldn’t have been the plan. He drove a leg-break from outside off to wide long-on; usually he would have gone over covers. He saw most of his top order batsmen combust. In the end as he walked away, MS Dhoni followed Ravi Shastri on to the field to shake hands with New Zealand players. There were lots of cooks in the team and we know how that cliche goes.

With New Zealand needing just 13 with another six overs to go, knocking the ball around would have sufficed. Kane Williamson’s side was going for the slow kill and wisely so by taking singles and twos. With the classy New Zealand skipper guiding the ship home, the Indian bowlers could expect some mercy — they would not be bludgeoned to humiliation. Williamson is more of a laser-beam surgeon than a farmer with a sickle. Hardik Pandya ambling in rather than running in full steam would get the Williamson treatment. Hardik went for the slower bouncer hoping to get Williamson to mistime. Cool Kane though waited and guided it over the leg slip region rather than over the standard first slip area. It wasn’t an upper cut nor a ramp shot but the lightest of touch bundled with timing. Two balls later he stepped down the track and unfurled the extra cover drive for another four. This was Williamson’s version of the iron fist in velvet glove.

How does Kane Williamson finish a game? The ball might have been full, pitched on his leg and seemed to be asking to be hit. It would have been so tempting to do a Dhoni, swing the ball, send it sailing over the cow’s corner and seal it with a six. Not Williamson, he nudged the Shardul Thakur ‘bad’ ball to deep square and walked to the non-striker end, pushing India to the brink of WorldT20 elimination. The deed done, two points in kitty and campaign back on track. Williamson might not believe in Dhoni’s turbo charge towards the finish line but he does have a blank face after crossing it. The finish might be low-key but an over before Williamson had probably played the shot of the game that would have made the fans and pundits shake their heads in disbelief. The world plays the ramp-shot over the slips or keeper but Williamson has the poise and skills to send the ball to fine-leg. Indian keeper Rishabh Pant was stunned as the New Zealand skipper sent a short ball from Hardik Pandya over this out-stretched left hand. It was the kind of demoralising stroke that brings a collective realisation to the opposition camp that they are up against a far superior opponent, who wouldn’t give you an inch, wouldn’t slip up and show no emotion.

You can never read Virat Kohli’s mind when it comes to the playing XI. Him playing Shardul Thakur was not a surprise, but the faux all-rounder getting picked for Bhuvneshwar Kumar might have disappointed fantasy team gamers. The switch meant those on the field for the crucial World T20 game were Hardik and Shardul – remember he had been included in the squad at the 11th hour as the former’s back-up. Pre-match there was speculations that India might have three spinners, with R Ashwin replacing one of the pacers. No, wrong again. Some even said mystery spinner Varun Chakravarthy shouldn’t have played before Ashwin even in the first game. Would Kohli get the most-experienced spinner for the make-or-break game? No. The conservative among the pundits, though, were clear – since you might have played your best eleven for the Pakistan game there was no reason for changing things after just one loss. Kohli stumped them too. One last bit. After India lost the toss, you anticipated Rohit Sharma and KL Rahul to walk out. No, Ishan Kishan came up the order. Didn’t Kohli get all sarcastic when someone suggested something similar at the press conference after the Pakistan loss?

The pat on the back

If only Adam Milne had taken a regulation catch at deep backward square leg, it would have been utter chaos in the Indian camp. At least in the stands where wives of the cricketers were sitting. Trent Boult had just taken out Ishan Kishan with a leg side half volley which was drop-kicked straight to man in the deep behind square. Boult then hurled a well-directed bouncer, angling away from Sharma, who was demoted to No.3 and had walked in at the fall of Kishan. It was hooked almost instinctively by Sharma and it flew straight to Milne, who dawdled towards it and waited. Perhaps, he could have taken one more step and the ball would have dropped into his palms at a comfortable height. Instead, he waited and the ball dipped towards his shoe laces and he clanged it. In the stands, Mrs Sharma buried her face into her palms and Mrs Ashwin, sitting beside her, rubbed her back to soothe her jangled nerves. Awwww.

If Milne doesn’t, Guptill will

Rohit Sharma is a compulsive puller/hooker and Trent Boult, a teammate at Mumbai Indians, threw in the bait with a short one. Rohit, in at No.3, as India gave Ishan Kishan his spot at the top of the order, must have been itching to have a go. The ball went to Adam Milne at deep fine leg, who lost sight of it in the blinding ‘ring of fire’ lights installed on the stadium roof. The ball went through his hands and Milne looked downcast. Earlier he had advanced too much from the edge of the circle when KL Rahul lofted it over mind-on. Milne was drafted into the squad in place of an injured Lockie Ferguson. If he wanted to make a good first impression at the T20 World Cup it was not to be. His first over, the fifth of the innings, made things worse as KL Rahul and Sharma took 15 runs off him. Good ‘ol Marty Guptill though would shun all sweaty palmy grips and run and fall forward, clutching onto the catch.

The balle-balle buoy for Black Caps

It wasn’t his best ball but it was enough to take out Rohit Sharma. It was a pretty short leg break from Ish Sodhi but Sharma couldn’t find any timing on his heave-ho and holed out to long-on. Sodhi got greedier and knocked out Virat Kohli too. A floated leg break outside off stump and Kohli chose to go across the line rather than an inside-out hit over covers, and holed out to long-on.

Sodhi was born in Ludhiana in Punjab and went to New Zealand at the age of four. He speaks Punjabi and can even do a nifty Punjabi rap on demand. When he played IPL for the first time in 2018 for Rajasthan Royals and was warming up ahead of the game, the crowd chanted ‘Ish Sodhi, Ish Sodhi!” And he was pretty touched by it. Since he was a kid, he has come to India often to visit his birth town, a small pind called “Sidhwana”. Whenever he visits his hometown, he gorges on Makkah wala Alu Parthaa and Kaju ka Barfi and lots of chicken tikka and fish. That’s where his interest stops, though. “I have never thought about playing for India since I have played cricket all my life in New Zealand,” he said once. He grew up idolising Anil Kumble and Mohammad Azharuddin and walked with a jersey with VVS Laxman’s name after the wristy batsman’s 281 against Australia. Now, kids in New Zealand walk around with his name on the back. From a small pind to a small country with big achievements.

Haunting to a hello-in catch

Gathering himself after snaffling Virat Kohli’s catch at long-on—a skier that could have been easily lost in the floodlights—Trent Boult’s eyes flickered backwards to see if his heel had nudged the ropes, and he took a deep sigh of relief. A broad smile crackling on his face, he pointed his index finger at the ropes, as if the ropes had life and he was exchanging a pleasantry or a word with them. A fairly standard catch, there was nothing spectacular about it other than good hands. Except that, for Boult, it would mean the semi-exorcism of a ghost that could still be haunting him. The ghosts of the 2019 World Cup final, where he devoured a terrific catch of Ben Stokes in the 49th over, only to lose his balance and fall over the ropes. In the context of the game, the catch was defining. Perhaps, in the context of the tournament, too, this catch could turn out to be defining.