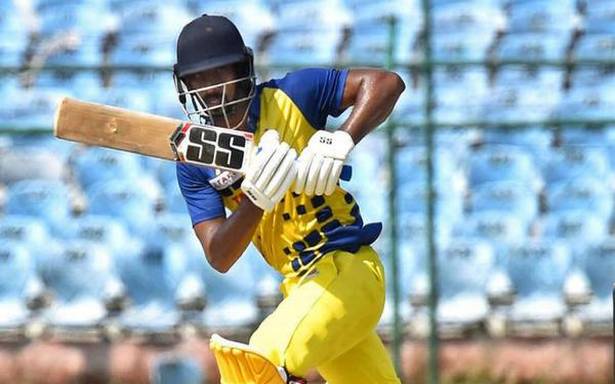 Baba Aparajith smashed 122 to help Tamil Nadu eke out a two-wicket win over Saurashtra here on Friday, and enter the final of the Vijay Hazare Trophy One-Day Championship.

This was after Saurashtra rode on a blistering 134 by Sheldon Jackson to post an imposing 310 for eight.

But Saurashtra’s effort was overshadowed by Aparajith’s master-class coupled with half-centuries by his brother Indrajith (50) and Washington Sundar’s (70) late cameo as TN chased down the stiff target in the final ball.

TN needed seven runs off the final over and tail-enders R Sai Kishore (12 not out) and R Silambarasan (2 not out) brought it down to 1 of the last ball off medium-pacer Chirag Jani.

Sai Kishore finished off the chase in style with a boundary.

Medium pacer Silambasaran (3/54) trapped Desai in front of the wicket to give his side the first breakthrough.

Then Jackson joined Jadeja and the duo added 92 runs runs for the second wicket. Jackson, who was more aggressive, upped the ante.

It was 23-year-old spinner M Siddharth (1/46), who broke the partnership after dismissing Jadeja.

After Jadeja fell, Jackson and Prerak Mankad (37) continued the onslaught.

While Jackson struck 11 fours and four sixes in his 125-ball knock, Mankad hammered four boundaries and a lone six. Jackson and Mankad conjured 81 runs for the third wicket as Saurashtra cruised ahead.

However, it was Silambasaran once again, who did the trick for his side, dismissing Mankad.

From there on, Jackson was unstoppable as he went all guns blazing.

Jackson departed in the 46th over after doing bulk of the damage but Vasavada’s late cameo ensured Saurashtra crossed the 300-run mark.

Sakariya struck again, removing Shankar (4), who drove straight to point, as TN slumped to 23 for two.

However, Aparajith, who hammered 12 boundaries and 3 maximums, and Indrajith (50; 5x4s; 1×6) then steadied the ship as they took the game deep and conjured crucial 97 runs for the third wicket to keep TN in the hunt.

Leggie Yuvraj Chudasma (2/69) pegged TN back by cleaning up Indrajith. Dinesh Karthik (31) was also unable to convert his falling to Jaydev Unadkat (1/66) with TN reeling at 168 for four.

Tamil Nadu’s hope was pinned on Aparajith and the determined opener and Sundar forged a 76-run stand for the fifth wicket to take their side closer to the target.

But the match was far from over as Apararajith was holed out at deep extra cover in 43rd over and then burly Shahrukh Khan (17) also fell in the 47th over.

Sakariya the dismissed Sundar and Siddharth in the penultimate over to raise Saurashtra’s hopes.

But it was not to be as Tamil Nadu tail-enders held their nerves to take their side into the title clash, where they will face on Himachal Pradesh on Sunday.