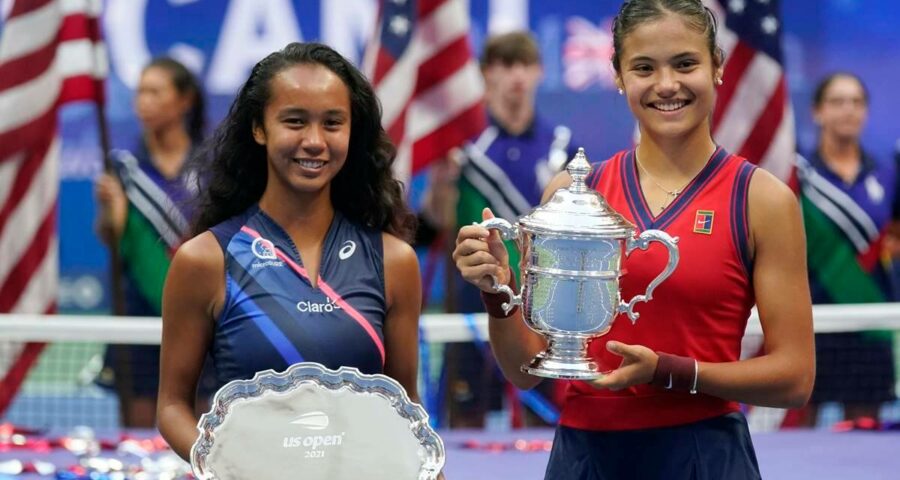 By Saturday, when Fernandez, 19, and Raducanu, 18, took to the court for one of the most unlikely Grand Slam finals, we already had a connection. 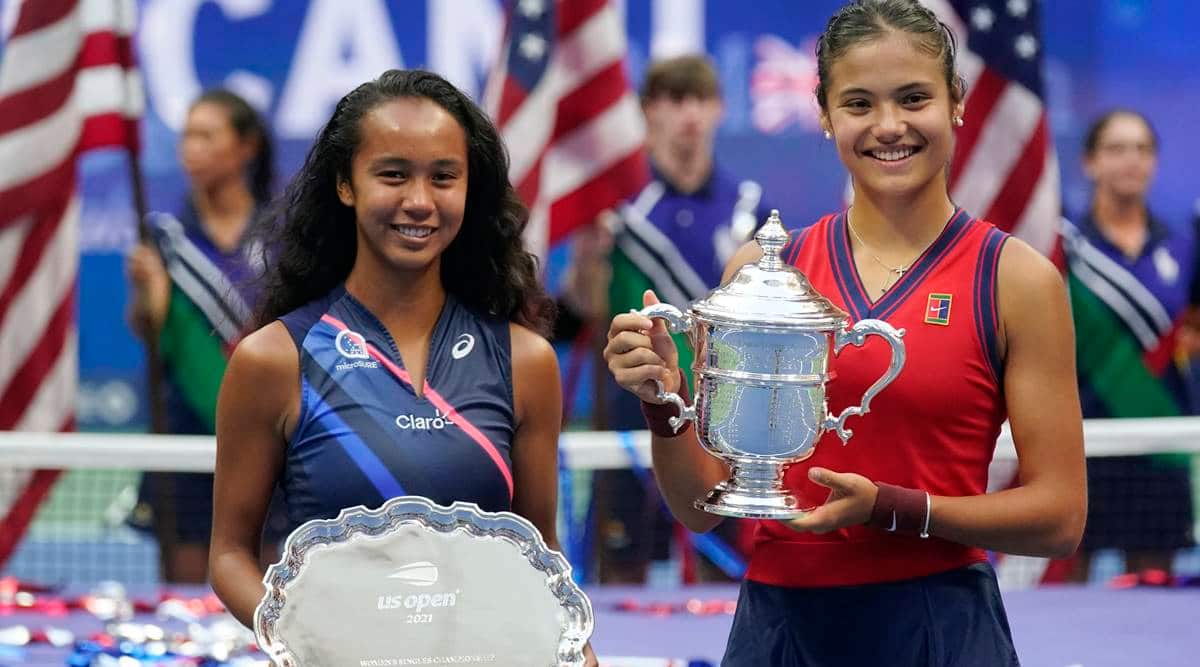 We adapt quickly. It’s part of the human spirit, whether we are teenage tennis stars or the people who line up and take a seat to watch them in the world’s biggest tennis stadium.

Two weeks ago, the vast majority of us had never heard of Leylah Fernandez or Emma Raducanu. Fernandez had never been past the third round in a major tournament and had struggled to find her best form in recent weeks. Raducanu joined the tour in earnest only this summer and had to make it through the off-Broadway qualifying tournament to secure a spot in the U.S. Open.

But by Saturday, when Fernandez, 19, and Raducanu, 18, took to the court for one of the most unlikely Grand Slam finals, we already had a connection.

They had boldly worked through the women’s draw during this special U.S. Open, which was full of communion between the players and the public after all the distancing of the last year and a half.

By Saturday, those who had been following their unexpected progress already knew about their strengths, their multicultural backgrounds and even their quirks: Fernandez’s jig behind the baseline before walking forward to serve, Raducanu’s habit of blowing on her fingers between points as if to cool off a very hot hand.

But what was most striking Saturday was how quickly both unseeded players adjusted to this grand occasion, calmly giving thoughtful prematch television interviews, walking past Billie Jean King’s quote on the tunnel wall, which says that “pressure is a privilege,” and then walking past King herself as they emerged into the late-afternoon sunshine for the biggest opportunity of their short careers.

It was all new, but you would not have known it once the ball was in play, as both attacked their groundstrokes and did their best to seize the occasion even after having nearly two full days to think about the occasion once they had won their semifinals.

But Raducanu and Fernandez both held firm, extending rallies with their quickness and defensive skills on the move, smartly sending lobs high into the atmosphere when cornered. But just as impressively, they finished points with authority when they had created the space to go for winners.

Their styles contrast in some ways. The left-handed Fernandez uses more spin and enjoys deploying the drop shot. Her technique is more artisanal than textbook, with her hands often far apart on the grip on a two-handed backhand as she improvises on the fly. The right-handed Raducanu favors more direct power and has fabulous fundamentals that allow her to control the ball even while swinging ferociously. She has a knack for making the tricky shot look smooth and an ability to run around her backhand in a flash and rip an inside-out forehand that Roger Federer could relate to.

But Fernandez and Raducanu are very contemporary tennis talents in their ability to sustain pace and consistency from low body positions, their knees often touching the court as they counterpunch.

Some of their extended rallies were spectacular Saturday as they exchanged backhand bolts with nary a grunt, their sneakers squeaking on the hard court as they focused on becoming a U.S. Open champion.

Only Raducanu would get that great satisfaction, and although the score of 6-4, 6-3 will look fairly lopsided in the history books, anyone who watched will know that the match was much more tenuous than that.

“These two young women are a gift to tennis, an absolute gift,” Andy Roddick, the 2003 U.S. Open men’s champion, wrote in a post on Twitter.

Raducanu will get no shortage of attention at home and abroad for her breakthrough. A fine student in the classroom, she is clearly a very quick study on a tennis court, too. But women’s tennis is a wide-open world these days: Fourteen players have won their first Grand Slam singles title since 2015.

More big trophies are no guarantee, no matter how phenomenal Raducanu’s run was in New York. But she seems wise beyond her years and not entirely of her generation: “I still haven’t checked my phone,” she said Saturday night.

Riches, unlike trophies, surely await. Raducanu is from Britain, a major market, and is telegenic with a global appeal as the well-spoken daughter of parents with roots in Romania and China. Also, her agent is Max Eisenbud, who helped turn Maria Sharapova’s unexpected Wimbledon victory at age 17 into gold and now has an even more unlikely success story to work with.

Raducanu finished her high-school exams shortly before Wimbledon, where she reached the fourth round in her Grand Slam debut and got a taste of “Emmamania” only to struggle with her breathing and nerves and retire mid-match against Ajla Tomljanovic.

I asked Raducanu if she viewed her ability to rebound so quickly from that setback as a triumph. “I think the biggest triumph for me is how I managed to just not think of absolutely anything else except for my game plan,” she said. “I just completely zoned in and focused on my craft.”

Roddick was right to shine a light on both players on Saturday. Fernandez is not yet a Grand Slam champion, but she is a world-class fighter who walks between points with the steely determination of someone on her way to break up a bar brawl.

She and her family have sacrificed plenty for her tennis career, and after losing a back-and-forth first set, Fernandez had every reason to still believe in her chances — given all of her successful battles with top players at Flushing Meadows. She upset three players ranked in the top five — Naomi Osaka, Elina Svitolina and Aryna Sabalenka — as well as Angelique Kerber, a former No. 1 in resurgent form.

Fernandez had beaten them all in three sets, so when Raducanu took a 5-2 lead in the second set but was unable to convert her first two match points on Fernandez’s serve, Fernandez grinned as if she knew something that nobody else yet suspected.

Why should she not have believed in another comeback? But when she got a break point in the next game, she had to wait to play it as Raducanu, who had scraped her left knee while sliding for a shot, took an injury timeout to clean up trickling blood and have the wound bandaged.

The stoppage was well within the rules, but in this thinker’s sport of ebbs and flows, it may have made the difference. Raducanu said she was concerned about losing her rhythm, as well. But it was Fernandez who expressed displeasure about the long pause to officials and then pushed a forehand long. Raducanu then saved a second break point with a leaping tap of an overhead.

She was back to deuce with Arthur Ashe Stadium abuzz and presumably most of Britain wide awake, as the match was broadcast in prime time in Raducanu’s home country.

This time, she did not flinch, surprising Fernandez with a fine serve down the T that gave her command of the rally and brought her a third match point.

She mulled her options, tossed the ball high and smacked an ace to become the first qualifier in the long history of tennis to win a Grand Slam singles title. In 10 matches, she never lost a set.

“I never thought I would see it, so I’m in shock,” said King, who watched from the stands as Raducanu dropped her racket and fell to the court, her hands covering her face.

It was a transformative moment, one that left both players in tears. But what seemed remarkable when the match ended was the same thing that had seemed remarkable as it began: the poise and adaptability of both young finalists.

And when Fernandez, her eyes still red, seemed to have answered her last question at the awards ceremony, she had the presence of mind to ask for the microphone one more time and say what she had planned for this bittersweet Saturday, the 20th anniversary of the Sept. 11 attacks.

“I know on this day it was especially hard for New York and everyone around us,” she said. “I just hope I can be as strong and resilient as New York has been the past 20 years.”