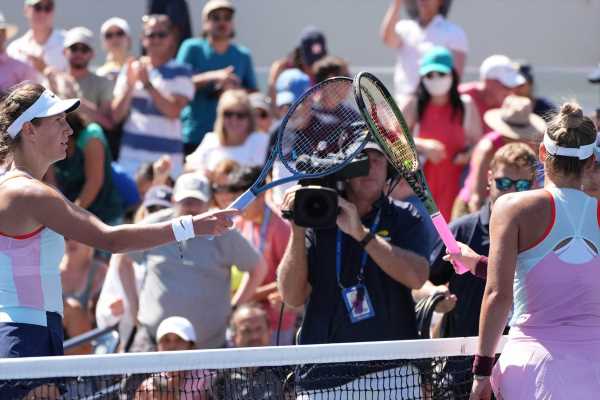 Geopolitical tensions simmered at the US Open on Thursday as Ukrainian Marta Kostyuk refused the customary handshake at the net when Belarusian Victoria Azarenka defeated her 6-2, 6-3 in the second round.

The pair exchanged a quick tap of the racket on Court 17 after Kostyuk whacked the ball into the net on the third match point and the three-time Flushing Meadows finalist let out a triumphant roar.

“Well, I wasn’t surprised. I don’t believe that making a big deal out of it is important. I always shake hands with my opponents,” said Azarenka, who added that Ukrainian Dayana Yastremska had done the same in Washington, D.C., last month.

“I cannot force anybody to shake my hand. It’s their decision. How did it make me feel? It’s not the most important thing in the world right now.”

It marked the latest uneasy moment at the year’s final major, where Russians, Belarusians and Ukrainians compete alongside one another against the backdrop of military conflict.

Belarus is being used as a key staging ground for Russia’s war in Ukraine, which Moscow terms a “special operation.”

Ukraine and the West accuse Russia of waging an unprovoked imperial-style war of aggression.

Kostyuk has repeatedly called for the WTA to ban Russian athletes from the Tour and told the Times last month that the invasion made Russian players on the tour into “enemies in a matter of minutes,” detailing how her family huddled in Kyiv amid assaults on the capital.

Days before their second-round meeting, it was the 20-year-old Kostyuk’s objections that helped prompt Azarenka to pull out of the tournament’s “Tennis Plays for Peace Exhibition” to raise humanitarian aid for Ukraine.

Azarenka said she was asked by the USTA to participate in the event and said at the time it was “a no-brainer” to accept.

“I thought that this was a gesture that really shows commitment. I’m not sure why it wasn’t taken that way. I don’t want to judge that, that’s what happened,” she told reporters.

Most of the global sporting community moved swiftly to isolate Russia and Belarus after the invasion began in February but tennis players from the two countries avoided tour-level suspensions, with the sport’s governing bodies requiring they compete under neutral flags.

Wimbledon took it one step further when they banned athletes from both countries at this year’s major, which meant Russian men’s world number one Daniil Medvedev could not take part.

The US Open said Russian and Belarusian athletes could compete without their flag or country displayed, a move that frustrated some Ukrainian competitors, including 2019 semi-finalist Elina Svitolina who said organisers “should have taken more serious action,”

Defending his title at the hardcourt major, Medvedev faced questions about the conflict almost immediately and told reporters after his opening night win over American Stefan Kozlov that he was trying to “learn every day.”

“Most of my really good friends, they know who I am. I’m still Daniil Medvedev, still play tennis,” he said.

Asked what the tour could do to resolve the bitterness between players, top seed Iga Swiatek said: “Basically I think it’s already too late.

“The best time for ATP or WTA to do anything was when the war started, and where the tension was pretty big, I mean, in the locker rooms,” she told reporters after beating Sloane Stephens in the second round on Thursday.

Swiatek added that she hoped the governing bodies could arrange meetings between some of the players, “showing that we should be united”.