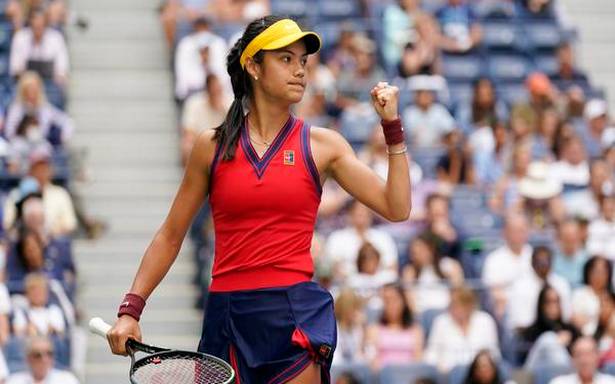 Raducanu was nearly as ruthless against Rogers, dispatching the last American in the women’s draw in 66 minutes.

Going through qualifying to get to the last eight at a major is a stunning accomplishment by itself, but the 18-year-old has done it without dropping a set.

Raducanu, who burst onto the scene this year by reaching the fourth round at Wimbledon in her first Grand Slam appearance, has gone one better at the U.S. Open in dominant fashion.

After a 6-0 6-1 hammering of Sara Sorribes Tormo in the third round Raducanu was nearly as ruthless against Rogers, dispatching the last American in the women’s draw in 66 minutes.

“It feels absolutely amazing to play in front of all of you and Shelby is a great opponent… she’s had a great week so I knew it was going to be a tough match,” Raducanu said on a packed Arthur Ashe Stadium buzzing over what they had witnessed.

Up next for the youngster is Swiss 11th seed and Olympic champion Belinda Bencic, who advanced with a 7-6(12) 6-3 win over Polish 2020 French Open champion Iga Swiatek.

“Belinda’s a great player who’s in great form so I know I’m going to have to bring it on Wednesday,” said Raducanu.

The teenager got off to a nervous start with world number 43 Rogers taking the early break to go in front 2-0.

But after that it was one-way traffic for Britain’s 150th-ranked qualifier who quickly settled in and stormed through the next 11 games to take the first set and lead 5-0 in the second.

The 28-year-old Rogers, coming off the biggest win of her career with a third-round upset of Australia’s world number one Ash Barty, appeared flat and was soon shell-shocked.

The American had rallied from 5-2 down in the third to beat Barty but there was no way back against Raducanu, who never allowed the American an opening.