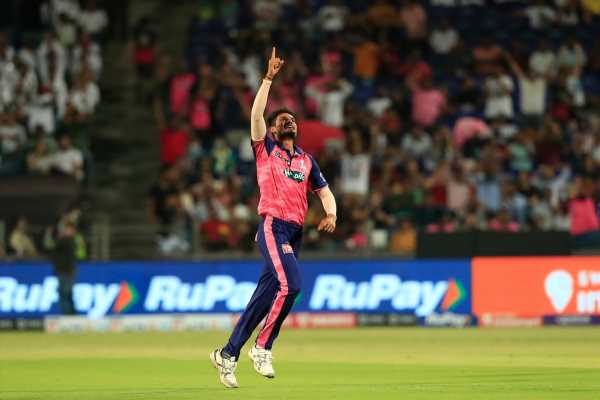 Rajasthan Royals have made a habit of defending low totals this season. However, this particular tie posed its toughest challenge yet. More often than not, it is that one crucial break early in the game that puts the pressure on the opposition and this time around, that moment of magic was provided by one magical over from Kuldeep Sen.

Following the early dismissal of an out-of-form Virat Kohli under bizarre circumstances, Royal Challengers Bangalore Captain Faf du Plessis slowly rebuilt his team’s innings, finding the boundary once every over until the fifth with the score at 37-1.

By the time medium pacer Kuldeep Sen was handed the ball to deliver the sixth over, du Plessis was already a set batsman at 23* off 19 balls.

Sen’s first ball was a good length delivery pitched outside off and du Plessis did not attempt to strike it. The second was a length ball outside off and this time, du Plessis slashed at it and ended up hitting the ball straight to Jos Buttler waiting at cover.

Glenn Maxwell, who had come to RCB’s rescue on multiple times this season, was next at the crease. Sen opted for a length ball outside off, Maxwell lashed at it and nicked it to Devdutt Padikkal in the slip cordon. Maxwell gone for a golden duck and a hat-trick on the cards!

In a matter of two deliveries, Sen had dismissed two of the most decisive players in the context of the RCB run chase which was now heading into free-fall at 37-3.

Sen’s hat-trick ball to Shahbaz Ahmed was an absolute beauty, but drifted away from the batter and into the wicket-keeper’s gloves.

Kuldeep would finish with 4-20 — he would return in the death overs to claim the scalps of Wanindu Hasaranga and Harshal Patel to seal the result.