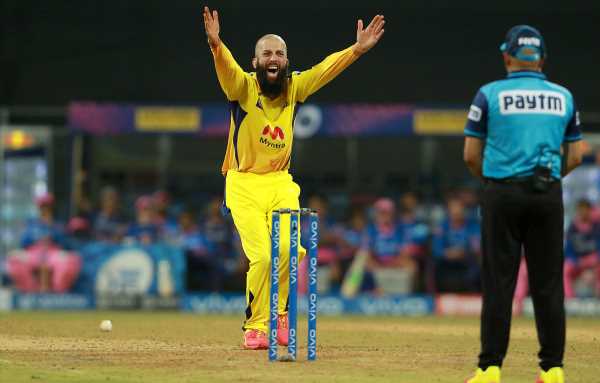 Chasing a huge 189 for victory, the Royals were on course at 87/2 in 11 overs, with Jos Buttler stroking 49 from 34 balls to bring the innings back on track after a couple of early wickets.

But CSK’s spin duo of Ravindra Jadeja and Moeen Ali triggered a batting collapse to take the match away.

After two expensive overs, Jadeja made a good comeback, dismissing the well-set Buttler. The left-arm spinner got the ball to grip off the pitch and turn enough to beat Buttler, who was looking to flick the ball across the line on the leg side.

In the same over, Jadeja bagged another wicket in Shivam Dube, who also failed to carry on after getting off to a start, as he also tried to clip it on the leg side, missed and was trapped leg before for 17.

That was the start of a stunning batting collapse for the Royals in the middle overs against spin.

Moeen struck in his very first over, dismissing David Miller leg before for 2, the batsman missing the sweep. He made it worse for Royals with a double strike in his next over.

Riyan Parag looked to take him on but only holed out to Jadeja at deep midwicket before Chris Morris was also caught by the same fielder as he played the slog sweep.

Royals lost five wickets for eight runs in the space of 21 balls and their hopes were all but over after being reduced to 95/7 in the 15th over.

They eventually finished on 143/9 in their 20 overs and suffered a 45-run thrashing at the hands of CSK — their second defeat in three games.