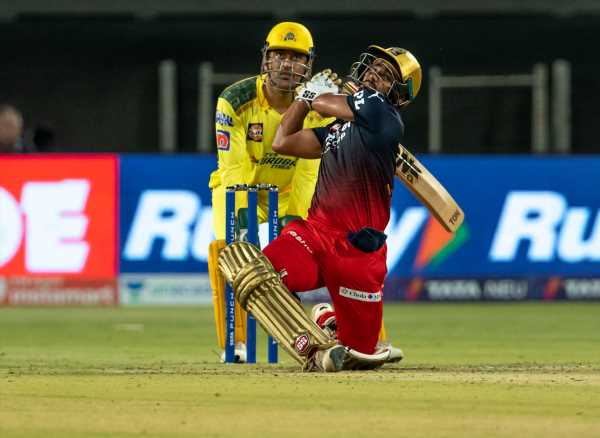 Royal Challengers Bangalore must thank their two unheralded batters Rajat Patidar and Mahipal Lomror for their crucial knocks which played a big role in their 13 run victory against the Chennai Super Kings to take them closer to the spot in the IPL play-offs.

After Captain Faf du Plessis (38) and Virat Kohli (30) gave RCB a good start with their 62-run stand for the opening wicket from 44 balls, CSK bounced back courtesy of their spinners.

Moeen Ali dismissed both the openers — du Plessis and Kohli while Glenn Maxwell was run out for 3.

At 79/3 in the 10th over and the CSK spinners thriving on the Pune wicket offering some assistance, RCB were in danger of losing their way with not much batting to follow.

Patidar, playing just his seventh IPL match, and Lomror, featuring in his 13th IPL game, set about rebuilding the RCB innings in the middle overs.

Madhya Pradesh’s Patidar was lucky to make it to IPL 2022 as he was named as the replacement for the injured Luvnith Sisodia. Having managed just 71 runs in four games last year, Patidar has shown vast improvement, hitting 52 from 32 balls against the Gujarat Titans in the previous match.

Rajasthan’s Lomror was bought by RCB for Rs 95 lakh (Rs 9.5 million) at the auction. Last year, playing for the Rajasthan Royals, left-hander Lomror had smashed a 17-ball 43 against Punjab Kings, but featured in only four games.

The duo showed great resolve to not only keep the CSK spinners at bay but also scored runs at a good pace. Patidar slammed Moeen for a six over midwicket in the 12th over and Lomror hit the same bowler for a straight lofted four in his next over.

Anything overpitched was severely dealt with Patidar who hit off-spinner Mahesh Theekshana for a four down to long-on before Lomror swept the Sri Lankan for a six over the leg side in the same over.

The two batters put on 44 runs for the fourth wicket before Patidar was brilliantly caught by Mukesh Choudhary off Dwaine Pretorius in the 16th over.

Lomror continued to keep the runs flowing as he hit Pretorius for a four and a six in his next over before he perished to Theekshana after a quickfire 42 from 27 balls.

Dinesh Karthik smashed a couple of sixes off Pretorius in the final over to lift RCB to 173/8. Courtesy of Lomror and Karthik’s 26 not out from 17 balls, RCB scored 50 runs from the last five overs despite losing five wickets.